Sandeep overwhelmed the Serbian 4-0 to grab a rare medal in the Greco Roman category for the Indians after Rajbir Chhikara (74kg) and Naveen (120kg) made early exits from the competition, losing in their first bouts.

Prior to Sandeep's scintillating effort, India's best finish in the classical style of wrestling was a fifth place by Mukesh Khatri at 2001 World Championship in the 54kg section. This is India's best-ever show in the World Championships with three medals after freestyle wrestlers, Amit Kumar Dahiya and Bajrang, won a silver and bronze medal in their respective weight categories.

The freestyle wrestlers finished a commendable sixth in the overall team rankings, which also earned the country its maiden berth in the World Cup to be held next March.

Sandeep, who lost in the first round in 2011 in Istanbul, Turkey, appeared passive in the first period as the two wrestlers jostled for control and was warned by the referee.

The Indian got another warning for passivity and his opponent was given parterre -- ordered hold position given as penalty.

But Sandeep, being at a disadvantageous position, resisted well and did not allow Maksimovic to collect points before the first three-minute period ended 0-0.

In the second period, Sandeep got parterre after the Serbian was warned by the referee and the Indian did not disappoint as he executed a back exposure to collect two points.

He then earned another two for counter attack to end the seven-day long championships on a high for India.

Earlier, Sandeep produced a spirited performance on the final day to reach the quarterfinals where his inspiring run was halted by Han-Su Ryu of South Korea who comprehensively beat the Indian 10-0 and eventually sailed into the finals.

The lone bright spot for the Indians on the day, Sandeep claimed Sharur Vardanyan of Sweden 6-4 in a thrilling repechage encounter to earn a shot at a bronze at the Papp Laszlo Sports Arena.

Sandeep, who got bye in the first round, got the better of Ismael Sanchez of Spain 5-0 and then accounted for Moldova's Mihail Cosniceanu 6-2, riding over their opponents on higher technical superiority.

But Sandeep could not repeat his scintillating performance and was tamed by the Korean in the last-eight stage.

While Chhikara lost to Finland's Veli-Karri Souminen 0-5, Naveen could not resist the challenge from Riza Kayaalp of Turkey and was beaten 0-4 in the preliminary bouts. 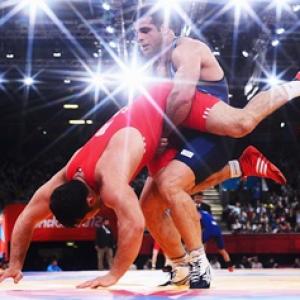 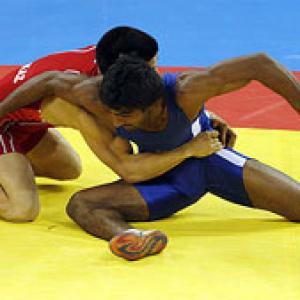