Runner-up here last year, Wozniacki outslugged Russian Maria Sharapova from the baseline 6-1, 6-2 after Bartoli had shrugged off the lingering effects of a stomach bug with a 6-1, 6-3 demolition of Belgian Yanina Wickmayer.

World number one Wozniacki, making very few mistakes against a harder hitting opponent in their evening encounter, broke an error-prone Sharapova three times in each set to triumph in 80 minutes at the Indian Wells Tennis Garden.

"I played very well tonight," the 20-year-old Dane said courtside after reaching her third consecutive WTA final this year. "It is always tough against Maria and it was very important that I kept my feet moving. 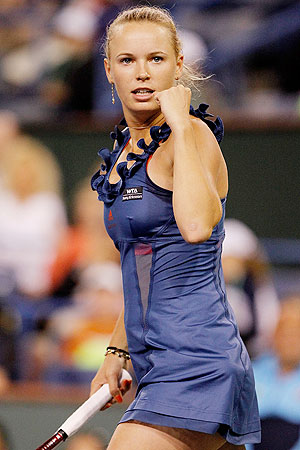 "She hits very hard and I was just trying to get into the right position every time."

Bartoli, at 26 the oldest player left in the draw, broke a listless Wickmayer five times in dazzling afternoon sunshine to claim a lopsided victory in 85 minutes.

The Frenchwoman squealed in delight after hitting a backhand winner down the line to beat her 23rd-seeded opponent for a third time in three meetings.

"I'm very excited to be in the final," Bartoli, a runner-up at Wimbledon in 2007, told reporters after ending a run of seven successive defeats in the last four of WTA events.

The Frenchwoman, who fired 10 aces and won 83 percent of her first serve points against Wickmayer, has not appeared in a WTA final since she won the biggest title of her career in Stanford in 2009.

"And knowing I could be there, like I did in the final of Wimbledon, helped me mentally to really stay positive, even when I had some bad results, and to really stay focused," Bartoli said.

The Frenchwoman was still battling the stomach bug that had sapped her energy during the quarter-finals where she beat 2008 champion Ana Ivanovic of Serbia 6-4 7-6.

"Today was better, but still definitely not 100 percent," Bartoli said. "My level dropped after the first set because I am still not able to fully eat normally before the match, so I didn't have many fuels in my body to hang on.

"But I stayed mentally very focused and I stayed positive toward the end. I knew if I was playing not 100 percent but at a good level, I will still be able to come out on top.

She double-faulted four times in a marathon game to start the second set, gifting Wickmayer the break, but immediately got back on serve before breaking the Belgian in the fifth to take a commanding 5-3 lead.

Serving for the match, Bartoli came from 0-40 down to book her place in Sunday's final.

"She made it tough on me. I never really got the chance to get into the match. I didn't really feel really good out there."