Hockey India's disciplinary panel chairman Pargat Singh on Friday demanded a stern action against the country's top five players, who left the ongoing national camp in Bangalore without permission to attend a function organized by the rival Indian Hockey Federation.

Former captain Sandeep Singh, Adrian D'Souza, Arjun Halappa, Sardara Singh and Prabhjot Singh, on Tursday, took part in a function organised by the IHF and Nimbus Sports, where they were unveiled as captains of four of the eight World Series Hockey (WSH) franchises.

WSH is a tournament supported by IHF, HI's rival faction, which is strongly objecting to the players taking part in the event. 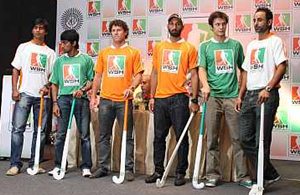 "This is indiscipline on their part and highly condemnable. Strictest action should be taken against them for disobeying HI's orders and attending a function without informing the concerned officials," Pargat said.

"The final say will be with the Sports Ministry and HI executive board. No player is bigger than the nation, but these players have proved that they only care about money and nothing else. They should be asked to leave the training camp immediately," he added.

There are around 176 players, including 40 foreigners from top hockey-playing nations, who are set to take part in the US $3 million series, starting December 15.

The IHF and HI are currently locked in a bitter war to run the game in the country. The government had, on Wednesday, issued an ultimatum to HI and the IHF to merge by July 25, failing which the Sports Ministry will take a decision and intimate the Supreme Court about it.

Hockey India is recognised by the International Hockey Federation (FIH) as the official organisation to run the sport in the country.

When asked, one of the players who attended the function said, on condition of anonymity: "We also have the right to earn money. In the end we need financial security. We don't want to lose this opportunity. Let's see what happens next."

"Let's take the example of Chris Gayle. He chose Royal Challengers Bangalore team in the IPL over his country. Now he is out of the national team," said the former Indian hockey captain.

Pargat said these players have jeopardised India's preparations for the Olympic qualifiers.

"We are busy preparing our team for the crucial Olympic qualifiers and these players are participating in a rival body's function. This is totally unacceptable," he said.

Pargat added that no one even felt the need to ask for permission from Hockey India's officials.

"We are here because of hockey. I am not against players making money, but not at the cost of compromising national interests."

He recalled that Sandeep and Sardara had missed the Sultan Azlan Shah tournament as they went for the Belgium league earlier this year.

"They should be aware of the fact that the country comes first," he said.

India will host the Champions Trophy in December and the Olympic hockey qualifiers for men and women in New Delhi next year.