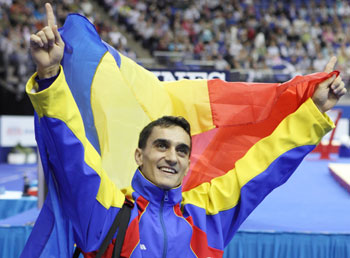 The 28-year-old tumbled to glory with a score of 15.700 after performing a series of complex twists and soaring somersaults.

Israel's Alexander Shatilov was awarded the bronze with 15.575.

The Romanian gave the fans the thumbs up as he stepped on top of the podium to receive his fourth gold medal on the floor.

"Every time it's harder so every time you win another one it's more difficult, the work is twice or three times more so I'm very satisfied," Dragulescu told reporters.

Apart from Dragulescu, no one else on the day had the talent or the belief to stop the Chinese.

The nation which dominated the 2008 Beijing Games by winning nine out of the 14 titles up for grabs, had to wait until the penultimate day of this year's competition to strike gold.

Zou Kai, who climbed to the top of the rostrum three times last year, had been expected to be the first of the Chinese winners in the floor final but he was squeezed out.

Zhang swivelled to the pommel horse title with a masterful exhibition which earned him 16.200.

"After the performance I celebrated to myself. I performed very well, almost perfect. I didn't realise I had won the title," said Zhang.

No such luck for local favourite Louis Smith.

The Olympic bronze medallist had been hyped up to become the first British man to win a world gold medal and came out into a frenzied O2 Arena punching his arms as if he was getting ready for a boxing bout.

But his big entry soon fell flat. He slid off the pommel as soon as he started his swivels and finished last out of the eight finalists.

Hungary's Krisztian Berki and Australian Prashanth Sellathurai made up the top three, leaving Smith to look up to the heavens to wonder what went wrong.

It was not the kind of spectacle the fans were expecting from Smith, who had hoped Saturday's final would set him on his way to claiming the Olympic title at the same venue in 2012.

"Devastated really but rather it happen now than in two or three years' time," Smith told reporters.

Instead of celebrating a British victory, the crowd soon realised that China's world-beating champions are likely to gatecrash the 2012 party.

Zhang had barely stepped off the podium when the strains of "The March of the Volunteers" anthem again started to reverberate around the arena as He pulled off her fast-paced tricks to soar past Japanese rival Koko Tsurumi on the asymmetric bars with 16.000.

Yan Mingyong flexed his bulging biceps to finish on top of the standings in the rings finale.

The Chinese gymnast edged out Bulgaria's Jordan Jovtchev, a five-time Olympian, in the strongman's event by 0.1 of a point with a score of 15.675.

Twice former champion Jovtchev, who at the age of 36 and with his silver-specked hair could be mistaken for one of the judges, proved he could still compete at the highest level when he picked up his eighth world medal in the discipline.

Apart from He's success, it was a bad day for Beijing winners as North Korea's Hong Un-jong botched both her vaults.

Hong sat down after her first effort -- a 2-1/2 twisting Yurchenko -- and followed it up by landing on bended knees from her second attempt. She finished fifth with 14.262.

American Kayla Williams made the most of Hong's misfortune and nailed her high-flying handspring straight front somersault with 1-1/2 twist. She scored a winning average of 15.087 from her two vaults.

© Copyright 2021 Reuters Limited. All rights reserved. Republication or redistribution of Reuters content, including by framing or similar means, is expressly prohibited without the prior written consent of Reuters. Reuters shall not be liable for any errors or delays in the content, or for any actions taken in reliance thereon.
Related News: Smith, Zhang Hongtao, Dragulescu, Zou Kai, Yan Mingyong
SHARE THIS STORYCOMMENT
Print this article 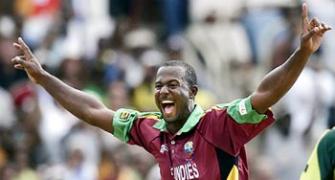 Decline and fall of Russia's gymnasts