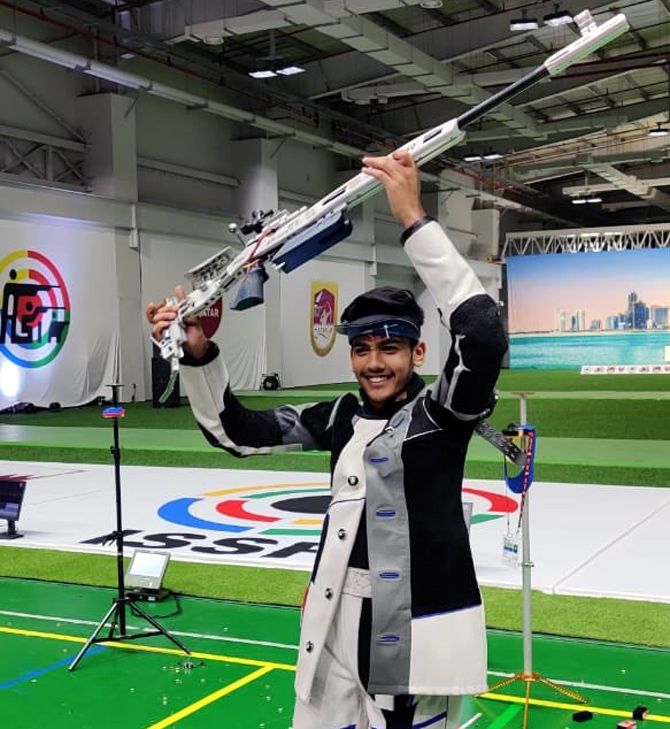 At 20, Tomar became the youngest Indian ever to win gold in this event when he shot 462.5 to claim the top prize ahead of Hungary's world number one Istvan Peni (461.6) and Denmark's Steffen Olsen (450.9).

After that, Yadav upstaged the experienced Rahi Sarnobat and the fancied Manu Bhaker to win gold in a 1-2-3 finish for India. The country's overall tally swelled to 19 with 9 gold, five silver and as many bronze medals.

Bhaker, aged only 19, shot 28 to settle for the bronze medal before being eliminated, leaving her two other compatriots to fight for the top prize at the Dr Karni Singh Shooting Range.

All three shooters have already bagged their quotas for the Tokyo Olympics.

Yadav, who fetched the Olympic quota with a second-place finish at the 14th Asian Championships in Doha in 2019, led the pack after first 20 targets with a score of 14.

She was followed by Bhaker at second with 13.

Then, the shooter from Bhopal led with a score of 21 and pulled away from the rest, even as the seasoned Sarnobat clawed her way back into the finals after struggling in bottom half.

In the finals, Yadav shot all the five targets twice -- in the first competition stage's second series and the sixth series of the elimination stage -- after beginning with two.

"I have trained in advance for tie shoots in final, I just had to do my best, not think who is in competition with me and which level they are in," Yadav said.

Sarnobat, the most experienced of the three, had a five out of five in the third series of the first stage before shooting four targets thrice in the fourth, seventh and ninth series in elimination.

The third ranked Bhaker had only one five out of five, in the fourth series.

"This will further boost my confidence ahead of the Tokyo Olympics," he said after his maiden gold in a senior world cup.

The other Indians in the final, veteran Sanjeev Rajput and Niraj Kumar, finished sixth and eighth respectively.

After an impressive start following which he led for a while, Tomar slipped in the standings but fought back strongly with a 10.4, 10.5 and 10.3 in the standing elimination stage.

Tomar is an Olympics quota-holder.

He won the bronze medal in the 50 metre rifle 3 positions event at the 2019 Asian Shooting Championships to secure a quota place for India at the Olympics.

This comes three days after Tomar combined with Deepak Kumar and Pankaj Kumar to win the silver medal in the men's team air rifle event.

In the event, Rajput led the qualification with 1172, while Tomar and Kumar shot identical score of 1165.

Istvan Peni, Aleksi Leppa (Finland), Jan Lochbihler (Switzerland), Juho Kurki  (Finland) and Olsen were the others to make the final, which was a 45-shot contest comprising the three series of kneeling, prone and standing.

Tomar, who failed to clear selection trials at the Madhya Pradesh Shooting Academy seven years ago, led the eight-man final at the end of the kneeling position with 155.0 and was in second place after prone with 310.5, behind Olsen (311.4) and ahead of Peni (309.9).

The gold medal is a far cry from the time when he was disqualified from his first Nationals in 2015, and then suspended for an entire year due to a technical reason.

Training rigorously for a year, he returned in 2016 and in 2018, Tomar won three gold medals in the junior nationals in all three rifle disciplines.

Having made his way into the Indian junior team, Tomar shone in the events he participated in before securing the Olympic quota.

In the women's 50m rifle 3 positions, Tejaswini Sawant was the best-placed Indian at 12th and behind her were Anjum Moudgil (16) and Sunidhi Chauhan (17).