World C'ships: Bajrang to fight for bronze; Jaglan misses out Star Indian wrestler Bajrang Punia suffered a shock defeat in his quarter-final bout but returned into medal contention as he entered the 65kg repechage round at World Championships in Belgrade on Saturday.

Bajrang lost at the hands of 23-year-old two-time cadet world champion American Yianni Diakomihalis by technical superiority (10-0) in the last eight round.

However, the two-time Commonwealth Games champion, who is searching for his fourth World Championships medal, became active again as he entered the repechage round after Diakomihalis reached the final.

Bajrang will take on the winner of the bout between Vazgen Tevanyan of Armenia and Bulgaria's Vladimir Vladimirov Dubov in his first repechage bout on Sunday.

The reigning Asian Games gold medallist had been trailing 0-2 before he suffered a nasty cut on his head, for which the bout had to be paused for a few minutes.

However, Bajrang did well to hold on despite being heavily bandaged. He scored two takedowns and an activity point to take the bout 5-4.

Sagar Jaglan's quest for a bronze medal in 74kg ended as the 18-year-old lost to reigning Asian Champion Yones Aliakbar Emami of Iran 6-0.

The World under-20 bronze medallist had earlier defeated Suldkhuu Olonbayar of Mangolia 7-3 to move to the bronze medal bout.

He had entered the repechage on Friday after suffering a quarterfinal defeat to three-time world champion winner Kyle Dake of the USA.

In the 97kg event, Vicky lost his qualification round bout to Samuel Scherrer of Switzerland 2-2. He was out of medal contention along with Pankaj (61kg), who also made an opening round exit after going down to Assyl Aitakyn of Kazakhstan.

Indian wrestler have disappointed in this edition of the World Championships with only Vinesh Phogat winning a bronze medal so far. 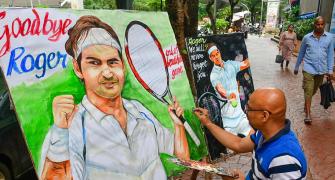 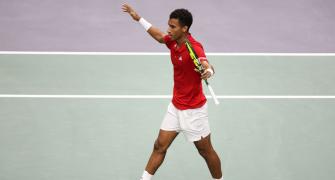 PIX: Alcaraz loses in first match as world No.1