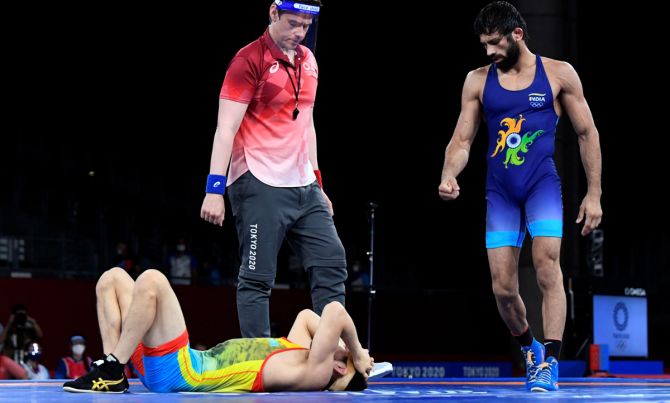 IMAGE: A total of 144 wrestlers will qualify for the Paris Games through the continental qualifying events (Asian, African, Pan-American and European). The top two wrestlers in each Olympic weight class will get one spot each for their NOCs. Photograph: Piroschka Van De Wouw/Reuters

The 2023 World Wrestling Championship will offer five quota places for the 2024 Olympics in each of the 18 weight categories instead of six as UWW on Wednesday announced changes to the qualification process for the Paris Games.

The World Championship, set to be held in Russia from September 16-24, will be the first qualifying event for the Paris Games.

Apart from the 2023 World Championship, the continental qualifiers (Asia, Africa, America, European) 2024, and the 2024 World Olympics Qualifiers will also offer quota for the Games.

Earlier, 108 quotas were awarded at the World Championships (six per Olympic weight) but now 90 quota places will be on offer.

The first six (6) highest placed athletes in each of the 18 Olympic weight categories at the 2019 Senior World Championships were awarded quotas for the Tokyo Games.

However, only top-5 wrestlers will earn quotas for their countries in Russia.

It means that all four medallists (gold, silver and two bronze winners) will secure the quota for their respective nations and the two bronze medal play-offs losers will contest for the fifth spot.

United World Wrestling (UWW) President Nenad Lalovic said, the changes are aimed at creating "further fairness in the distribution between the World Championships and the World Qualifier."

A total of 144 wrestlers will qualify for the Paris Games through the continental qualifying events (Asian, African, Pan-American and European). The top two wrestlers in each Olympic weight class will get one spot each for their NOCs.

The quota winners at the 2023 World Championship will not be eligible to participate in the continental qualifiers unless they participate in a different style.

At the World Olympic Qualifiers, three quotas in each Olympic weight class instead of the two previously will be at stake.

The bronze winners will fight it out for the quota in each of the 18 categories.

Unused quotas due to withdrawal, doping offence, or non-participation, will be transferred to the next best wrestler of that weight category of the tournament.

The deadline for the Olympic Games entries will be July 8, 2024. The wrestling competition will be held from August 4-11.