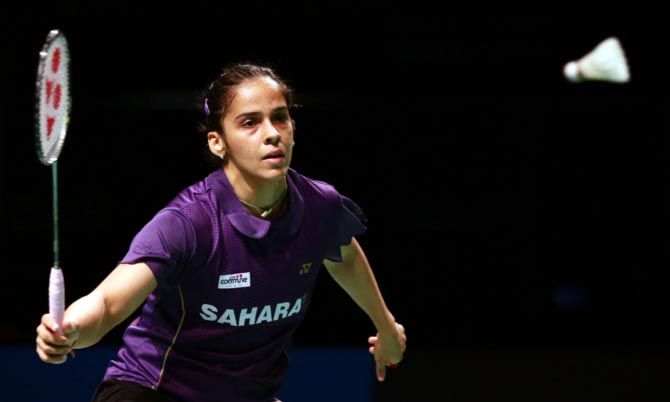 Saina Nehwal and P V Sindhu rallied splendidly from a game down to make it to the quarter-finals in the World Badminton Championships, in Copenhagen, on Thursday.

While the 11th-seeded Sindhu will take on World No. 2 Shixian Wang of China, who eased past Thi Trang Vu of Vietnam 21-12, 21-7 in another pre-quarter-final, seventh seeded Saina will take on China's world No.1 Li Xuerui, who eased past compatriot Han Li 21-9, 21-17 in just 27 minutes..

Saina looked completely off-colour and was never in contention in the first game as the world No. 14 Japanese opened up a 4-0 lead and maintained it throughout. The nearest the Indian could come was 5-6. Thereafter, she was always behind.

In the second game, Saina got her act together and surged ahead 7-3, but Takahashi soon earned four consecutive points to make it 7-7 and then moved swiftly to extend the gap.

At one stage the Japanese had a 13-8 lead, but just when it looked as if she would take the game and match, Saina fought back and reduced the gap to 15-16 before catching Takahashi at 17-17.

At 18-18, Saina upped the ante and reeled off three straight points to take the match to the decider.

The third and final game turned out to be cakewalk for India's ace shuttler, who broke away from a 7-7 situation to win comfortably at 21-12.