A third-round throw of 20.88 metres proved enough for Adams, who suffered a tearful defeat by Belarussian Nadzeya Ostapchuk at the London Olympics, only to be upgraded to gold after the winner failed a dope test. 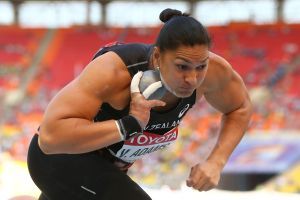 American sprinter Allyson Felix won three successive 200 metres world titles between 2005 and 2009, but missed out in 2011 when she took bronze.

Cuban hammer thrower Yipsey Moreno also won three world titles in a row between 2001 and 2005 but was denied a fourth in Osaka in 2007 when she missed gold by just two centimetres.