Images from Friday's proceedings at the World Athletics Championships, in Doha. 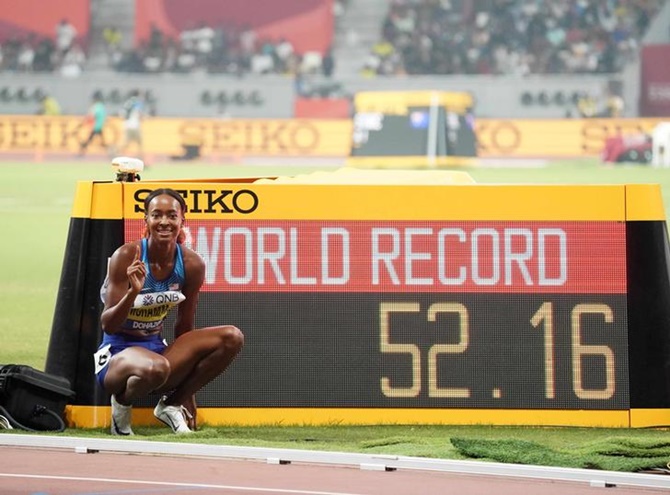 IMAGE: Dalilah Muhammad of the United States poses alongside the scoreboard after winning the women's 400 metres hurdles in a World record 52.16 seconds at the World Athletics Championships, at Khalifa International Stadium, Doha, on Friday. Photograph: Kirby Lee-USA TODAY Sports/Reuters

American Dalilah Muhammad broke her own World record to win the women's 400 metres hurdles at the World Championships with a time of 52.16 seconds on Friday, edging out compatriot Sydney McLaughlin in a gripping race.

The 29-year-old Muhammad, the 2016 Olympic champion, crossed the finish line 0.04 seconds faster than her previous World record set in July.

The American attributed her two World marks to her work ethic, and said she was focused on successfully defending her title at next year's Tokyo Olympics.

"It's just how I work," she told reporters after the race. "I go out there every day and just try to give it my all. It feels good to have it come when it matters."

Muhammad was only slightly ahead of silver medallist McLaughlin over the first 100m of the race, but her lead grew as they came through the second bend.

When she crossed the finish line, Muhammad had no idea she had set a new record.

"I didn't even know who had won the race," she said.

McLaughlin, 20, closed in on her team mate on the home stretch but she could not quite catch up as she finished second in 52.23 seconds, a personal best.

"She is amazing," McLaughlin said of Muhammad. "She has been doing this for a long time. I constantly try to learn from her. We knew it would be fast, but we didn't think it would be another world record."

The two Americans completely dominated the race, opening up a large gap on the rest of the field.

Rushell Clayton of Jamaica took the bronze with a personal best time of 53.74 seconds. 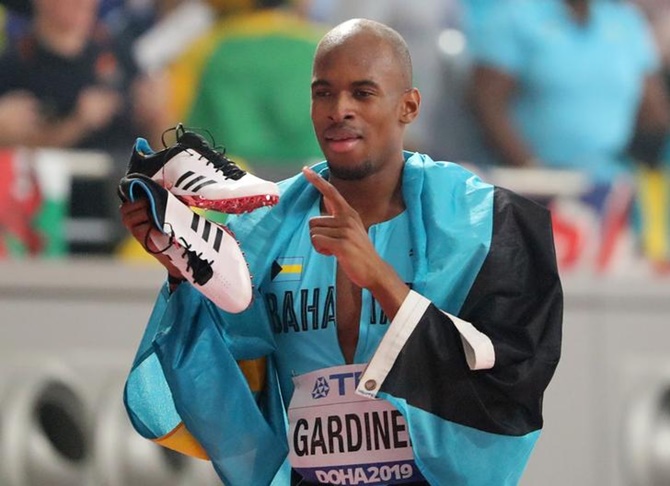 Bahamian Steven Gardiner powered to victory in the 400 metres, one month after he was personally affected by the hurricane which devastated his country.

Gardiner, who was troubled by an Achilles tendon problem earlier in the season, won in 43.48 seconds, making him the sixth-fastest 400m runner in history, as he went one better than the silver medal he claimed in London two years ago.

Colombian Anthony Zambrano produced a surge down the final straight as he charged from fourth to second to snatch the silver and leave American Fred Kerley, one of the pre-race favourites, with the bronze after an enthralling race.

Kirani James of Grenada, the former World and Olympic champion who made a comeback this year after being plagued by injury for several seasons, finished fifth. 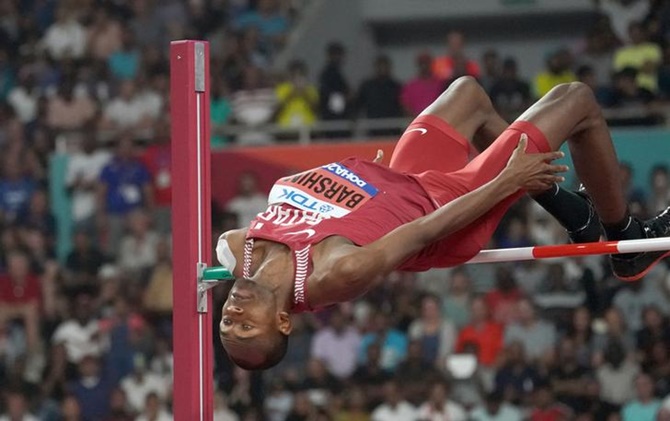 Lifted by a packed stadium, Qatar's Mutaz Barshim soared to victory in the men's high jump to give the hosts a long-awaited first gold medal.

With the crowd on their feet for every jump, Barshim delivered the performance they demanded by clearing 2.37 metres on his first attempt before watching on as his rivals failed to match his effort.

Two Russians, who are in Qatar competing as neutral athletes, completed the podium with Mikhail Akimenko, cleared to compete just last month, celebrated his return to international competition taking the silver and Ilya Ivanyuk the bronze.

"I was not 100% ready but when I came here and see all those people cheering for me, even if I was dying, if they take me from the wheelchair or ambulance I would do everything I can."

Qatar's big night, however, ended on a sour note when technical issues prevented the awarding of the high jump medals and the athletes were left standing at the side of the podium as officials scrambled to fix the problems.

In the end, with the stadium having emptied the athletes walked off the stage without a ceremony taking place and officials later announced that the medal presentation would take place on Saturday.

No athlete at these championships was saddled with higher expectations than Barshim who has been one of high jumping's very best for nearly a decade with a collection of Olympic and world championship medals, including a silver at the 2016 Rio Olympics, to underscore his quality. 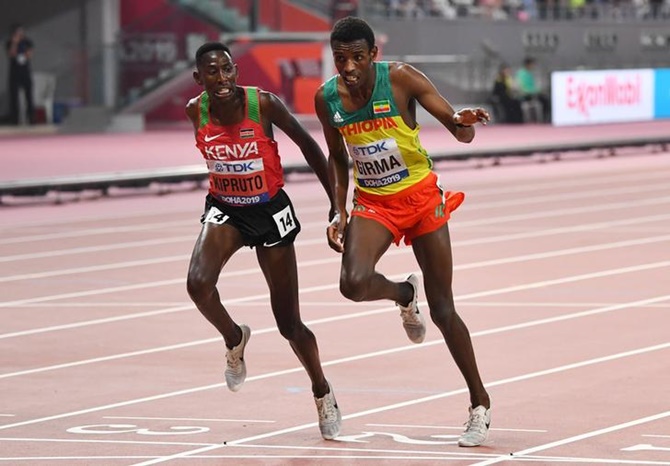 In the home straight the race came down to a 100 metres sprint and Kipruto just won it, dipping to pip the 18-year-old Girma on the line in a time of eight minutes, 1.35 seconds.

Girma was 0.01 seconds back and had to settle for silver, Ethiopia's first ever medal in the event.

"The Ethiopians really pushed hard because they knew I was kicking," Kipruto said. "They had their plans before we started the race and I had plans for us Kenyans to push hard.

"For me in championships I always believe experience matters a lot, it is not about shape.

"Steeplechase is normally a Kenyan event it belongs to Kenyans but nowadays there are competitors from around the world."

But the 24-year-old Kipruto only managed to keep his country on top by the smallest of margins.

Trailing the 18-year-old Girma over the final barrier, the Kenyan tapped into his experience and timed his kick to perfection to beat his rival to the wire by millimetres. Cuban Yaime Perez was rewarded for her persistence as she won the discus gold medal, having left empty-handed in her three previous appearances in the event.

Perez beat two former champions as the Caribbean nation enjoyed a one-two in the event, although few people seemed to be paying much attention.

The discus was held next to the high jump which hogged the limelight as Qatari Barshim Mutaz won the gold medal, sending the Khalifa stadium into raptures.

Perez, 28, produced a throw of 69.17 metres with her fifth attempt to overtake compatriot Denia Caballero, the world champion in 2015.

Double Olympic and world champion Sandra Perkovic, who has been struggling for form this season due to injury, took the bronze with 66.72.

The Croatian had won four the of last five global titles, claiming Olympic gold in 2012 and 2016 and the world title in 2013 and 2017 with only defeat to Caballero in 2015 interrupting the run.

Perez said she had been worried about an injury before the competition.

"I thought I would not be able to recover. This is my fourth world championship and I always arrived in top shape but always left without medals. It shows you should never give up. I persevered and earned my medal," she said.

Perkovic said she was looking forward to a break.

"Let's move on now the season is over," she said. "I need some vacation and, next year, I want to be back." 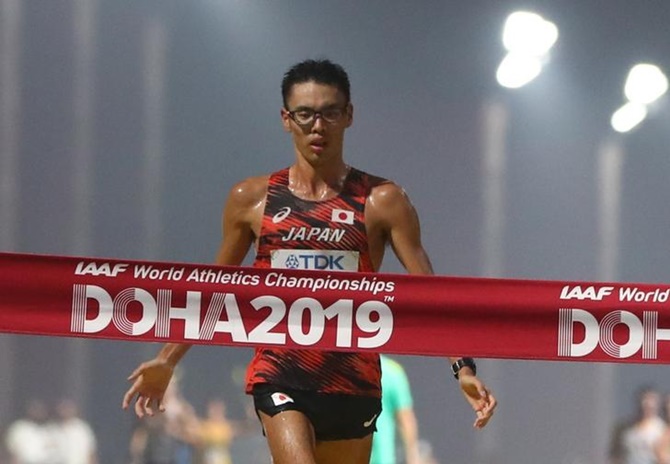 Toshikazu Yamanishi of Japan took gold in the men's 20km race walk, on Saturday, making him a favourite on home roads at next year's Tokyo Olympics.

In the sizzling heat and humidity of the Qatari night, Yamanishi had a comfortable lead for the second half of the race, crossing the finish line in one hour 26 minutes and 34 seconds.

Vasily Mizinov, a Russian authorised to compete as a neutral athlete, closed up on Yamanishi towards the end of the race, finishing 15 seconds behind him.

Perseus Karlstrom took the bronze by clocking a time of one hour and 27 minutes, giving Sweden its first race walking medal at the world championships since 1991.

Several walkers did not finish the race on Doha's famous Corniche promenade, which started at 23:30 to minimise the harmful effects of the heat on competitors.

Yamanishi's medal completed a double for Japanese male race walkers in Doha after Yusuke Suzuki won gold in the 50km event earlier in the championships.

The extreme conditions walkers faced in Doha will provide useful training and tactics for the Tokyo Olympics, where the heat and humidity are expected to be similar.

© Copyright 2020 Reuters Limited. All rights reserved. Republication or redistribution of Reuters content, including by framing or similar means, is expressly prohibited without the prior written consent of Reuters. Reuters shall not be liable for any errors or delays in the content, or for any actions taken in reliance thereon.
Related News: Dalilah Muhammad, Mutaz Essa Barshim, Sydney McLaughlin, Bahamian Steven Gardiner, IMAGE
SHARE THIS STORYCOMMENT
Print this article