The 27-year-old had created history to become the first Indian woman to reach the javelin throw final at the World Athletics Championships. 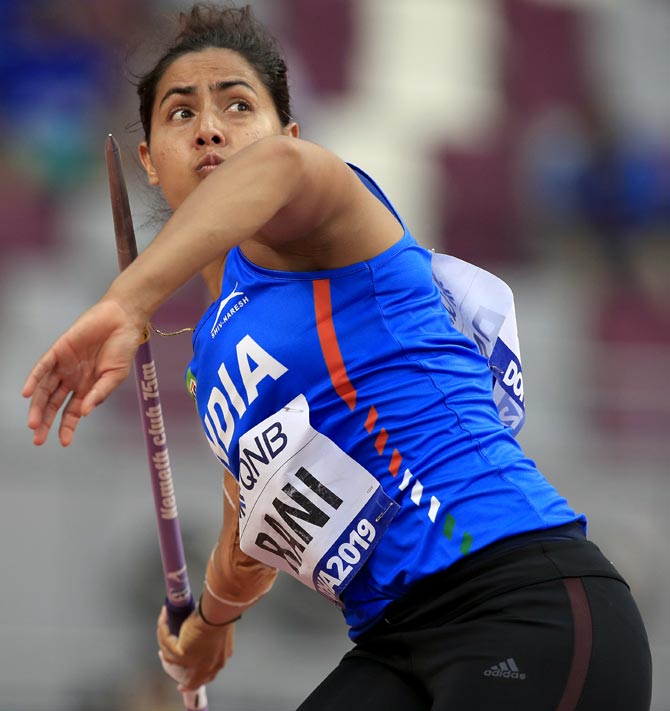 IMAGE: Annu Rani could only produce a best of 61.12m in the final round to finish eighth out of the 12 finalists. Photograph: Andy Lyons/Getty Images for IAAF

India's Annu Rani failed to repeat her impressive qualifying round form as she finished eighth in the women's javelin throw at the World Athletics Championships, in Doha, on Tuesday.

Annu, who on Monday smashed her own national record with a 62.43m throw, could only produce a best of 61.12m in the final round competition on Tuesday.

The 27-year-old Annu opened with a 59.25m before coming up with efforts of 61.12m and 60.20m which put her among the top eight after three attempts and gave her three more throws.

The 2018 Commonwealth Games silver medallist, Kelsey Lee Barber, won the gold with a final round throw of 66.56m while the Chinese duo of Asian Games champion Liu Shiying and Asian champion Lyu Huihui took the silver and bronze with efforts of 65.88m and 65.49m respectively.

Annu will, however, held her head high as she had become the first Indian woman to reach the javelin throw final in the World Championships.