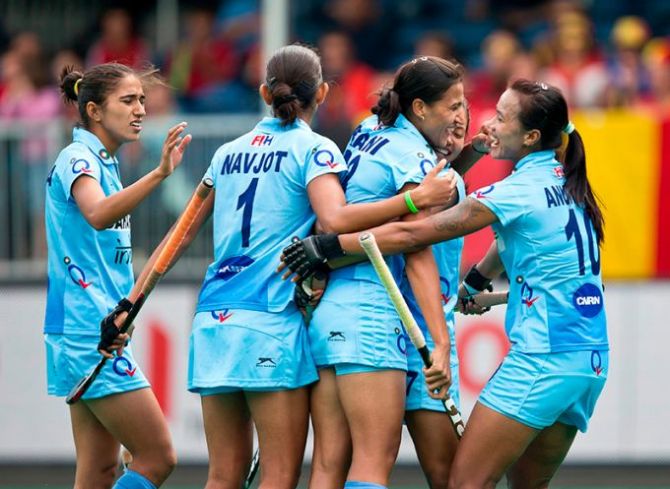 IMAGE: Many organisations have been quick to pull funding and end seasons for women’s sport during the pandemic. Photograph:  Hockey India

Women’s sport might need a generation to get back recent gains if it is left 'by the wayside' during the COVID-19 pandemic as organisations focus on getting men’s competitions back on track, the head of a New Zealand women’s advocacy agency told Reuters.

Rachel Froggatt, chief executive of Women in Sport Aotearoa, said that while the New Zealand government had pledged support for women’s sport the coronavirus shutdown threatened to stifle the momentum of the last few years.

Women’s cricket, soccer, Australian Rules, rugby league and rugby union competitions have gained traction in Australia and New Zealand but many organisations have been quick to pull funding and end seasons for women’s sport during the pandemic.

“The fear we had was that women’s sport would go by the wayside as they concentrated on getting men’s sport up and running,” Froggatt said on Thursday.

“If women’s sports gets put on the shelf and treated like they’ll come back to it when they have the time and money again, then we are looking at a generational loss.”

Women’s sport has seen progress in 'peaks and troughs' over the last 25 years but the last five have brought consistent upward momentum, Froggatt said.

“The feeling I was getting both internationally and domestically was that we were on a wave that was starting to build,” she added.

“I think the fear at the moment is that COVID-19 will set that back and unpack a lot of the successes.”

Despite the concerns, Froggatt said there were signs they could survive the fallout.

The women’s World Twenty20 cricket final between Australia and India in early March attracted more than 80,000 to the Melbourne Cricket Ground, a sure sign of the increasing popularity of women’s sport, she said.

Froggatt said she had been told Sports Minister Grant Robertson had been 'very firm' on ensuring that women’s sports was treated equally in the dispersal of the funding.

Another reason for optimism, Froggatt said, was the rise of more women in positions of authority at global governing bodies such as FIFA’s Sarai Bareman and World Rugby’s Katie Sadleir.

“The sports sector has experienced an enormous shock and what we have seen is completely unprecedented,” she said.

“We have a very long road ahead of us. We will have to keep reminding people of the value of women’s sports.”