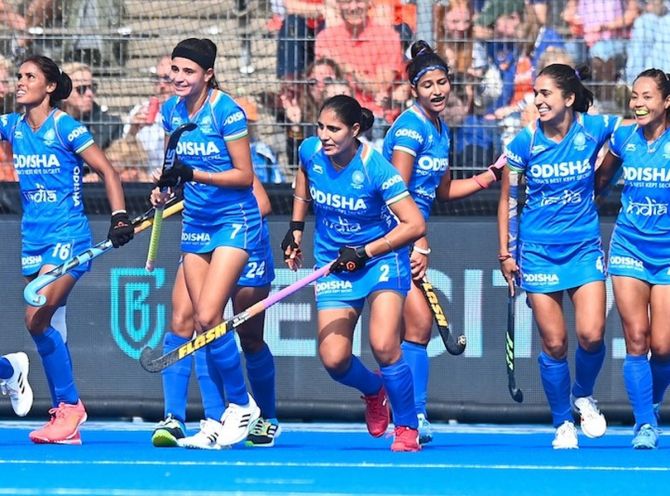 The Indian women's hockey team played out a hard-fought 1-1 draw against England in its opening match of the FIH World Cup in Amstelveen, The Netherlands, on Sunday.

England took the lead through Isabella Petter in the ninth minute before Vandana Katariya equalised for India in the 28th minute.

There was hardly anything to differentiate between the two sides in the first two quarters as they matched each other stick for stick.

The Indians had the first shy at the goal as early as in the first minute in the form of a penalty corner, but they wasted the opportunity.

Minutes later, skipper Savita made a fine save in front of the goal to deny the English women.

After a neck and neck fight it was England who took the lead through Petter who neatly deflecting in a ball from outside the 'D'.

India responded brilliantly and secured back-to-back penalty corners seconds later, but Gurjit Kaur was first denied by the post and then by English goalkeeper Hinch.

The Indians kept up their tempo and continued to press hard on the English defence and secured their third penalty corner in the 17th minute, but once again Gurjit faltered.

Three minutes later, Savita once again came to India's rescue to keep her side in the match.

In the 28th minute, India secured their fourth penalty corner when Vandana sounded the board from a rebound.

India secured another penalty corner just at the stroke of half time, but once again, England goalkeeper Hinch made a brilliant save.

England started brightly after the change of ends but it was India who managed a shot at the goal, only to see Neha Goyal's shot being saved by Hinch.

Thereafter, England dominated the rest of the third quarter but failed to translate their efforts into goals.

The neck-and-neck fight between the two teams continued in the fourth and final quarter but yielded no result.

In the 56th minute, India had a great chance to surge ahead but Sharmila Devi failed to connect from close range as the ball hit her foot.

India will play China in their next Pool B match on Tuesday.