Women's hockey WC: India ease past Italy 3-0 to set up quarter-final with Ireland 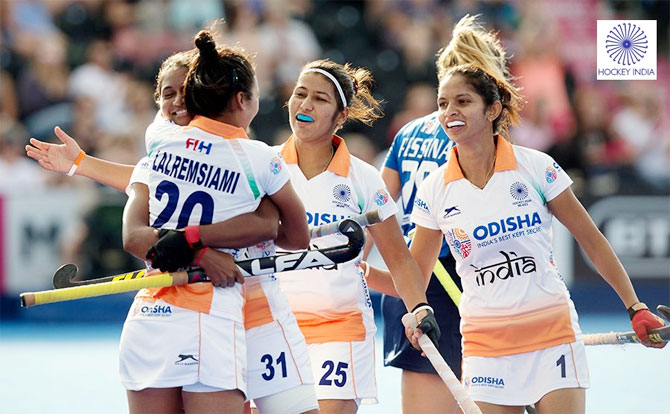 Indian women's hockey team produced a stellar performance to ease past lower-ranked Italy 3-0 in the cross-over match and progress to the quarter-finals of the World Cup in London.

The difference between 10th- ranked India and 17th-ranked Italy was the first touch control and the ability to finish an attacking move successfully.

India won the first penalty corner of the game and although it was charged down by Ivanna Pessina, the subsequent ball in from India proved too clever for the Azzurre to deal with.

Lalremsiami was on hand to lift the ball past Martina Chirico in the Italian goal after the ball was quickly switched across the circle by Vandana.

The lead was nearly extended at the start of the second quarter as Lalremsiami was found in plenty of space but was unable to control the ball well enough to beat the rapidly advancing Italian goalie Chircio.

The second half saw Italy come out hard and play more attacking hockey.

Jasbeer Singh and Lara Oviedo were both instrumental in creating chances, although when they managed to get the ball to the high-playing Valentina Braconi, she was dealt with by the impressive Lilima Minz in Indian defence.

Indians were unfortunate not to extend their lead when a quick counter attack saw the ball skim past Chirico's goal following Deepika's shot.

Still India piled on the pressure and some good work by Monika down the Indian right-hand side was rewarded by a penalty corner in the final minute of the third quarter, which was converted by Neha Goyal after a goal mouth scramble to double India's lead.

India had a bright chance to make it three as Navjot Kaur was left with just Chirico to beat but the Italian keeper showed her class as she stood up to the shot.

The game was finally put beyond Italy's reach when Vandana was rewarded with a goal in the 55th minute.

The result means India will now face Ireland in the quarterfinal tomorrow, an encounter that Indian skipper Rani is anticipating with relish.

"We have gained confidence throughout this tournament," she said.

"Early in the tournament we didn't do the one thing we needed to do – score goals. But we have found the net now and we can definitely push on with our journey. We do not see that journey ending tomorrow," Rani added.

Wednesday’s match will also give the Indians a chance to avenge upon their 0-1 loss to Ireland in the pool stages.

Meanwhile in the second crossover match of the day, hosts England beat Korea  2-0 to set up a quarter-final date with mighty Netherlands.