The Indian women's hockey team lost 1-2 to the United States via the golden goal in the bronze medal play-off match and returned empty-handed from the first leg of the Four-Nation Tournament, in Auckland, on Monday.

Locked 1-1 at the end of the regulation time, India conceded a penalty stroke three minutes into extra-time, and US captain Lauren Crandall converted it easily to pocket the bronze medal at the Harbour Hockey Stadium.'

Both teams played a defensive game, but it was the United States who took the lead in the 47th minute through a penalty-corner, converted beautifully by Shannon Taylor.

Down 0-1, the Indians had no option but to go on the offensive. The move resulted in some good penetrations into the American circle but India's forwardline lacked finishing.

India finally restored parity in the 56th minute when Chanchan Thokchom tapped the ball home after receiving a pass from Poonam Rani.

Thereafter, the US got as many as four clear-cut scoring chances in the form of penalty-corners but failed to convert a single one as the match went into additional time.

In the third minute of extra-time, the US earned a penalty stroke when Shannon Taylor's direct hit from a set-piece struck India defender Joydeep's foot, and Crandall made no mistake.

The second leg of the Four-Nation Tournament will be played at Lloyd Elsmore Hockey Stadium in Pakuranga, New Zealand from April 18-22.

India take on the US on Wednesday followed by matches against Australia and New Zealand.

© Copyright 2020 Reuters Limited. All rights reserved. Republication or redistribution of Reuters content, including by framing or similar means, is expressly prohibited without the prior written consent of Reuters. Reuters shall not be liable for any errors or delays in the content, or for any actions taken in reliance thereon.
Related News: India, Shannon Taylor, New Zealand, Crandall, Chanchan Thokchom
SHARE THIS STORYCOMMENT
Print this article 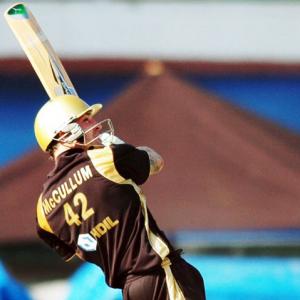 The untouched landmarks in the Indian Premier League