Sania Mirza and Somdev Devvarman would look to improve their Grand Slam singles records even as veterans Leander Paes and Mahesh Bhupathi eye their first major title together after rejoining forces when the Wimbledon Tennis championships start in London on Monday.

Sania and Somdev have had a reasonably good season so far with their singles ranking improving considerably.

From 108 at the start of the year, Somdev is now sitting pretty at 68 while Sania has also taken long strides to be at 60 from 166. 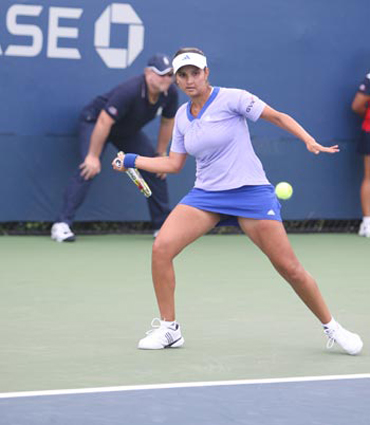 In the doubles she is enjoying a career-best rank of 14 following the runner-up show at the French Open.

Somdev's has been a curious case of inconsistency as on his day he has beaten tough customers but has turned up ordinary on other days.

Just before Wimbledon, Somdev snapped his losing streak of five consecutive first round matches and scored a morale boosting win over World No 33 Guillermo Garcia-Lopez of Spain in Eastbourne only to lose to Julien Benneteau.

It is for the first time that Somdev will feature in the singles main draw of Wimbledon. Last year, he had fallen in the second round of the qualifiers.

Out of five attempts, he has scored only one victory in Grand Slam events. And he would surely look to improve on that count as he is pitted against Germany's 110th ranked Denis Gremelmayr.

If he clears the first round hurdle, he could be up against Russian 18th seed Mikhail Youzhny.

Sania has also got a good opener as she is up against Virginie Razzano, who is placed 38 places below her but the French woman has beaten the Indian in the past, although that was way back in 2007.

Sania has not moved beyond the second round of a Grand Slam since the 2008 Australian Open, where she reached the third round and the job is tougher at Wimbledon as she could be facing world number one and top seed Dane Caroline Wozniacki in the second round.

The best Indian bet for a title would yet again be the pairing of Paes and Bhupathi, the Australian Open runners-up.

They are in good touch and were the finalists at the warm up event to the only grass court Grand Slam.

They also triumphed at the Chennai Open and Miami Masters and would look to win their first Grand Slam after reuniting.

They have been seeded third and would open against Croatian pair of Ivan Dodig and Lovro Zovko.

Also expected to do well is Rohan Bopanna along with his Pakistani partner Aisam-Ul-Haq Qureshi. They face the Colombian duo of Juan Sebastian Cabal and Robert Farah in their first round match.

Somdev is also plying his trade in the men's doubles and has teamed up with Japanese Kei Nishikori. They will face the German duo of Rainer Schuettler and Alexander Waske.

In the women's doubles, fourth seeded Sania and her Russian partner Elena Vesnina will lock horns with American-Russian duo of Melanie Oudin and Anna Chakvetadze.