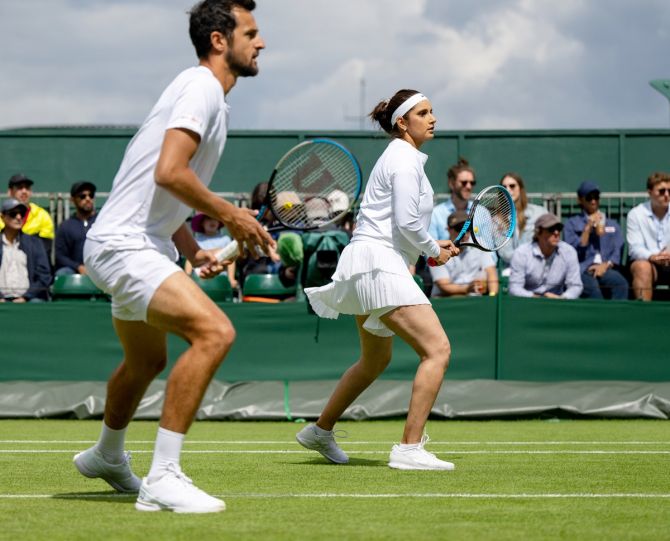 Sania Mirza and her Croatian partner Mate Pavic reached their maiden mixed doubles semi-final at Wimbledon as the 6th seeds stunned 4th seeds Gabriela Dabrowski and John Peers in a thrilling 3-set battle in the quarter-final match on Court 3 on Monday.

Sania Mirza, who has already announced that the 2022 season would be her last on the tour, and Mate Pavic will take on the winners of the final quarter-final match between Robert Farah/Jelena Ostapenko, the seventh seeds, and second seeds Neil Skupsi and Desirae Krawczyk.

Sania and Pavic, who seemed to be the crowd favourites on Court 3, put on an emphatic show, beating Dabrowski and Peers 6-4, 3-6, 7-5 in an hour and 41 minutes. Sania and Pavic were solid with their returns as they did not let the pressure slip away in the final set.

Sania and Pavic broke Dabrowski's serve in the decisive final game of the 3rd set, thereby avoiding a 10-point tie-breaker.

The Indo-Croatian pair had 73 percent win percentage on first serves and 65 percent on second serves. Pavic, especially, was brilliant with his serves, hitting them with a lot of power

Notably, Sania and Pavic had advanced to the quarter-finals after their second-round opponents Ivan Dodig and Latisha Chan gave a walkover.