Images from Day 5 of Wimbledon at the All England Lawn Tennis and Croquet Club in London, on Friday. IMAGE: Canada's Denis Shapovalov showed no mercy with a scintillating display to put himself in the Wimbledon last 16 for the first time and deny Andy Murray a 12th visit to the fourth round at Wimbledon. Photograph: Julian Finney/Getty Images

This time not even Centre Court's roof could rescue Andy Murray as the home favourite and two-time champion's dream of a deep Wimbledon run were crushed by Canada's Denis Shapovalov in the third round on Friday.

Twice this week the 34-year-old Murray had rolled back the years with late-night wins under the roof, but Shapovalov proved a step too far as the 22-year-old left-hander dished out an emphatic 6-4, 6-2, 6-2 beating.

Murray, back in the singles at Wimbledon for the first time since 2017 after two hip surgeries, had thrilled his fans with dramatic victories over seeded Georgian Nikoloz Basilashvili and German qualifier Oscar Otte on Monday and Wednesday.

Some had even begun to fantasize about the metal-hipped Murray making an unlikely tilt for a third Wimbledon title.

Reality hit home, however, as Shapovalov showed no mercy with a scintillating display to put himself in the Wimbledon last 16 for the first time and deny Murray a 12th visit to the fourth round at the All England Club.

Murray walked off to a standing ovation and will now focus his attention on the Tokyo Olympics where he will be defending the singles title he won in London and Rio de Janeiro.

While Murray said there were positives to take from a memorable week, there was also frustration.

"I want to be performing better than what I did here. Even though there were some great moments," the former world number one said. Having overcome a tricky hurdle on the home turf of a British sporting icon, 10th seed Shapovalov will move ahead to face Spaniard Roberto Bautista Agut full of confidence.

"This is a dream come true for me to play a legend like Andy today," the Canadian said on court. "Huge shout outs to him -- what he's doing nobody's done and he's truly an inspiration to people like me.

"It's truly amazing to be on this court and play a match like today. I don't think I can play any better."

In the preceding match on Centre Court, British number one Dan Evans had been beaten by American Sebastian Korda.

But the crowd had really come to roar on old warrior Murray whose victories in the 2013 and 2016 finals turned him into British sporting royalty.

The theory was that even despite giving away 12 years to Shapovalov and hardly playing this year, Murray could feed off the crowd's energy and move into the second week.

But from the moment Murray slipped over in the second game and then watched a Shapovalov backhand rip past him in the next game to drop serve, it looked like being an uphill struggle.

Shapovalov was fired up and gave Murray the run-around as he accelerated into a 5-1 lead, only for Murray to claw back three games and have three break points to make it 5-5.

Had he drawn level who knows what effect it might have had on Shapovalov's nerves, but the Canadian held firm, saving the third break point with a superb drop half-volley.

On his first set point Shapovalov played a Murray-esque drop shot and tapped away a volley into the open court.

Shapovalov dominated the second set with some ferocious hitting. With the light fading, the roof was closed and lights switched on to enable play to continue.

It revived memories of Monday when Murray suffered a seven-game meltdown against Basilashvili before re-igniting when the roof was closed and again on Wednesday when he was in deep trouble against qualifier Otte before being roared to an epic five-set win under the roof.

But Shapovalov was ruthless on the resumption as he closed out the contest in style. Tunisian Ons Jabeur cast a spell over former champion Garbine Muguruza and dazzled the Centre Court crowd to reach the Wimbledon fourth round with a 5-7, 6-3, 6-2 victory on Friday.

Jabeur dipped into her box of tricks to outflank the powerful 11th seed who was slowly driven to distraction by an opponent who gave a masterclass in angles and spins.

The artful 26-year-old showed great resilience to fend off Muguruza's heavy hitting early on and eventually took control to reach the last 16 at Wimbledon for the first time.

Jabeur, who last month became the first Arab woman to win a WTA title when she triumphed on grass in Birmingham, will face 2020 French Open winner Iga Swiatek on Monday.

The Tunisian began nervously with a couple of double-faults to drop her opening service game but from then on she gave Muguruza a torrid time as took the 2017 winner out of her comfort zone. To her credit former world number one Muguruza won the opening set as her power game just about held sway but she never looked comfortable trying to solve the Jabeur puzzle.

From 3-3 in the second set Jabeur began to take control and there was an air of slight desperation about Muguruza as struggled to figure out what her opponent would do next.

Jabeur, the 21st seed, broke Muguruza's serve twice to forge 5-1 ahead in the deciding set and held her nerve when she served at 5-2, sealing a memorable win with a sensational forehand, her 44th winner in a superb performance.

"This is the best day of my career," Jabeur, a role model for Arab sportswomen, said on court to an appreciative crowd.

"I was a bit nervous today. She plays unbelievable on grass, it was difficult in the first set but after that I stayed more calm. When I play loose and good everything gets better." 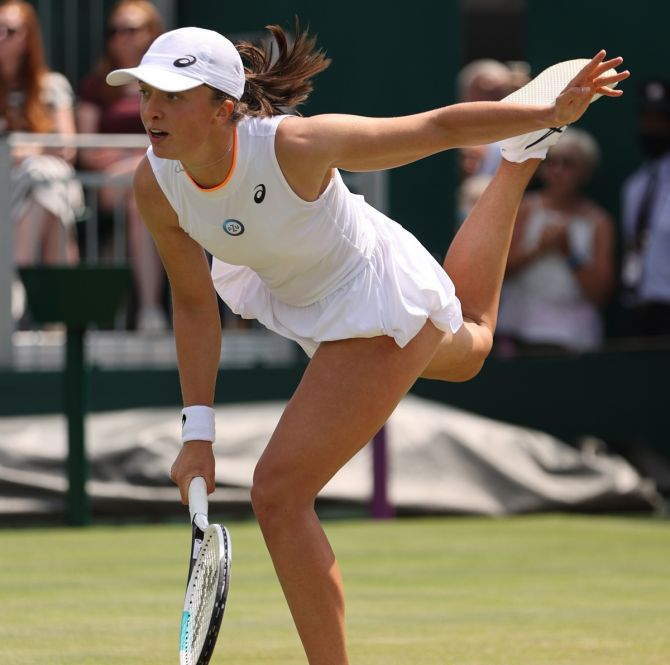 Former French Open champion Iga Swiatek stormed into the Wimbledon fourth round as her relentless pressure proved too much for Romanian Irina-Camelia Begu, who managed a solitary mark on the scoreboard in a 6-1, 6-0 demolition.

Poland's Swiatek, seeded seven, arrived at Wimbledon having previously won only one match on grass but she looked very much at home as she suffocated her opponent from the start to reach the last 16 with her third straight-sets victory.

The 20-year-old, who won the Roland Garros title in 2020, dropped only eight points on serve in the match and half of them came in just one game.

She broke her opponent twice to race into a 5-0 lead, before Begu finally held serve, and then showed some grit to go with the punishing consistency of her ground strokes when she saved three break points to hold and take the first set.

The second set was even more one sided as the Swiatek swept away the dying embers of Begu's resistance to romp into the next round. IMAGE: Russia's Ludmilla Samsonova reacts during her third round match against Sloane Stephens of the US. Photograph: Paul Childs/Reuters

Russian wildcard Liudmila Samsonova overcame a mid-match wobble to stun former US Open champion Sloane Stephens 6-2, 2-6, 6-4, progressing to the last 16 of a Grand Slam for the first time at Wimbledon.

Less than a month ago, Samsonova was still looking to break into the top 100 in the rankings while trying to qualify for the Berlin grasscourt event.

The 22-year-old racked up seven straight wins to win her maiden WTA title in the German capital, becoming the first qualifier to win a WTA 500 event since Tsvetana Pironkova won Sydney in 2014.

Samsonova's strong serve and thunderous baseline hitting was once again on display on Court One as she broke Stephens' serve three times to claim the opening set.

Stephens, chasing a second week appearance at the All England Club for the first time since 2013, fought back with some brilliant court coverage and counter-punching but once again fell behind early in the final set.

Samsonova held her nerve and saved a crucial break point in the eighth game to maintain her slim lead, before sealing victory by sending down her fourth ace of the match.

"I want to thank the tournament organisers for this opportunity," said world number 65 Samsonova, who will next face eighth seed Karolina Pliskova for a place in the quarter-finals.

"I don't have the words to describe, I'm so happy." 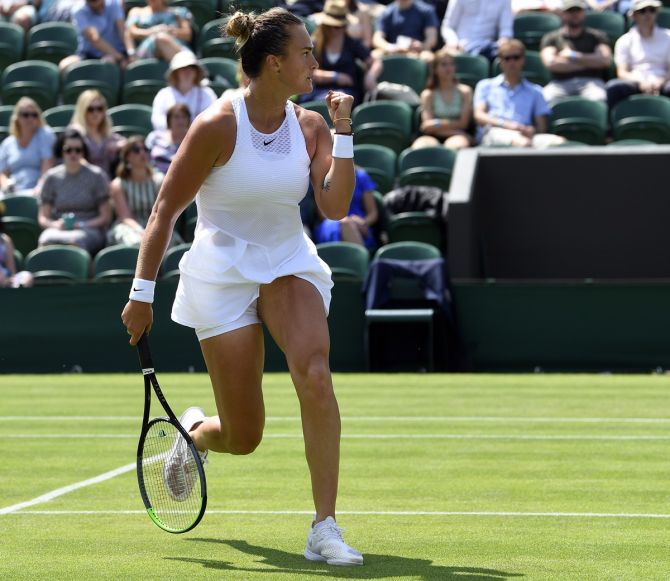 Second seed Aryna Sabalenka crushed Colombian teenager Maria Camila Osorio Serrano to reach the fourth round at Wimbledon although a late stutter took the sheen off what had been an otherwise ruthless 6-0, 6-3 display.

Sabalenka, who had been given a scare by lowly ranked Briton Katie Boulter in the previous round, romped to the first set and looked set to wrap up victory with her opponent winning just a solitary game.

She was made to wait, however, after being broken in her penultimate service game and while Sabalenka's celebrations were somewhat muted when she eventually finished the job, her 19-year-old opponent wore a big smile as the pair shook hands at the net.

It had been an otherwise dominant display from 23-year-old Belarusian Sabalenka, who broke Osorio Serrano's serve six times to reach the fourth round at Wimbledon for the first time in her career.

Next up for Sabalenka will be an encounter with Kazakhstan's 18th seed Elena Rybakina who reached the last 16 with a 6-1 6-4 win over American Shelby Rogers. 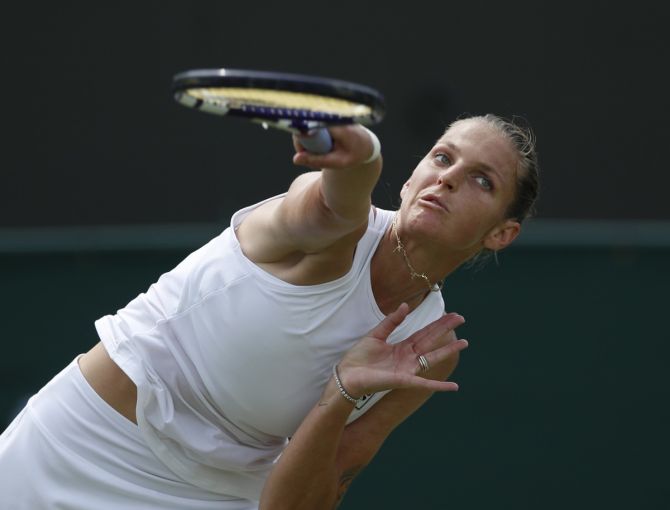 Eighth seed Karolina Pliskova beat Tereza Martincova 6-3, 6-3 in the battle of Czechs on Court Two to move into the last-16 at Wimbledon.

Former world number one Pliskova fell at first hurdle in the tune-up tournaments in Berlin and Eastbourne last month but the 29-year-old has yet to drop a set at Wimbledon.

The last time the two met was in the first round of the US Open in 2019 and there was little to separate them then with Pliskova advancing only after winning tiebreaks in two sets.

Although Pliskova made 36 unforced errors and nine double faults, she fired 30 winners past her compatriot who struggled with her first serve and managed to convert only one break point opportunity.

Pliskova, who has reached at least the quarter-finals of every Grand Slam barring Wimbledon, will play either American Sloane Stephens or Russian wildcard Liudmila Samsonova in the next round.

Korda too good for Britain's Evans as he reaches last 16 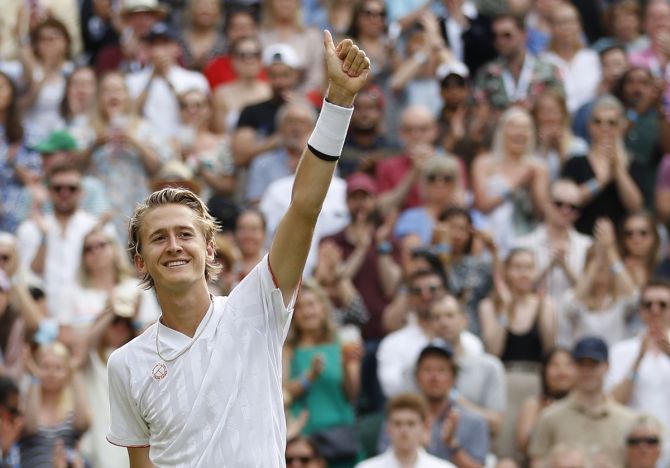 IMAGE: Sebastian Korda of the US reacts after winning his third round match against Great Britain's Dan Evans. Photograph: Peter Nicholls/reuters

A few days after his older sister Nelly won the women's PGA Championship to become the world's top-ranked golfer, Korda maintained a fine family tradition with a superb display.

Striking the ball crisply from the baseline and serving powerfully, Korda kept Evans under control to keep the home fans quiet and claim a relatively comfortable victory.

The world number 50, coached by his father Petr Korda, a former world number two and 1998 Australian Open champion, suffered a dip when Evans hit back to take the second set.

But he was the dominant player throughout and struck 51 winners on his way to his second Grand Slam fourth round, having made his breakthrough by doing the same at the 2020 French Open.

To go one stage further he must get past big-hitting Russian Karen Khachanov, the 25th seed, on Monday.

Evans was one of three British men to reach the third round along with Andy Murray and Cameron Norrie.

It was the first time since 1999 that had happened.