Images from Day 1 of Wimbledon. Defending champion Novak Djokovic overcame an early fright to fend off British teenager Jack Draper 4-6, 6-1, 6-2, 6-2 and launch his quest for a sixth title as Wimbledon returned after a two-year absence on Monday.

The first match on Centre Court since Djokovic's nail biting victory over Roger Federer in the 2019 final -- 716 days ago -- was a classic David versus Goliath clash.

And while there was to be no dream Grand Slam debut for 19-year-old Draper, the match proved the perfect way to bring Centre Court back to life after it's enforced silence.

Djokovic has never lost a Grand Slam match to a player ranked as low as world number 253 Draper, but looked a little stunned as he struggled to find his footing on the greasy turf and contain the fearless hitting of the Briton.

Grand Slam main draw debutant Draper broke serve in the third game and made a mockery of his inexperience to win the opening set to huge roars from the crowd.

Twice Djokovic found himself on his backside in the first set and with the roof closed because of the rain that delayed play on the outside courts, the stage looked perfect for a Wimbledon shock of monumental proportions. 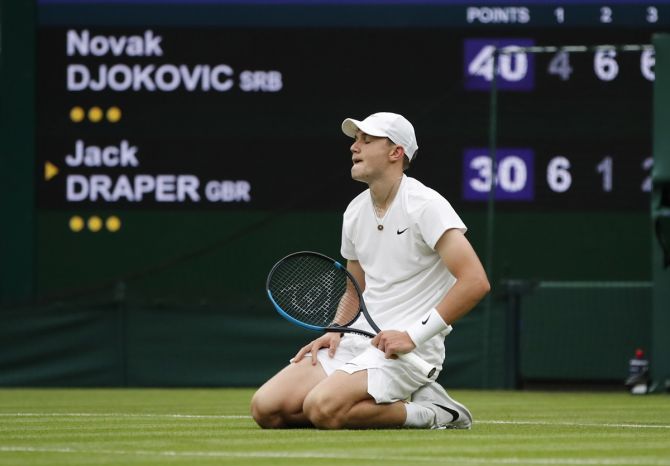 But Djokovic is not a 19-time Grand Slam champion for nothing and the Serb quickly snuffed out the danger, levelling the match by dominating a 26-minute second set.

When Draper completely missed an overhead to drop serve in the second set, Djokovic roared in relief.

From that point on it was straightforward enough for Djokovic who looked immaculate as he completed his victory.

"It feels great seeing everyone and being back on the most sacred tennis court in the world," Djokovic, who is bidding to win a record-equalling 20th Grand Slam title, said on court.

"It was very sad last year that Wimbledon was cancelled but really glad the sport is back." Back on the hallowed Centre Court turf on which he made himself a British sporting icon, the 34-year-old delighted his fans as he rolled back the years, producing vintage shot-making to lead by two sets and 5-0 in the third.

But in a bizarre twist he lost seven successive games to send the match into a fourth set.

An interruption while the Centre Court roof slid into place appeared to help settle Murray's nerves and he got the job done to set up a second-round against Frenchman Arthur Rinderknech or Germany's Oscar Otte -- both qualifiers.

"I did well to win the fourth set in the end because that was mentally not easy going to the locker room after losing that third," Murray, who received a thunderous ovation at the conclusion from the 7,500 crowd, said on court.

"It was just disappointing to lose the third set. I had to remember what I was doing to get into a winning position. I think I served better in the fourth and turned it round."

Murray, the 2013 and 2016 champion, had not played a singles match at Wimbledon since he hobbled to a quarter-final defeat against American Sam Querrey in 2017.

That loss was the beginning of a dark chapter in Murray's career as he underwent hip surgery in 2018 and 2019.

The journey back has been a tortuous one and after missing the Australian Open because of a positive COVID-19 test and then suffering niggling injuries he arrived at Wimbledon with only five Tour-level matches under his belt this year. 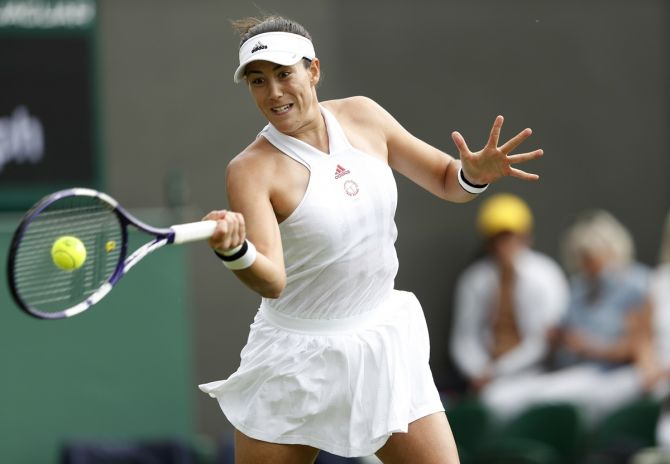 Former champion Garbine Muguruza began her latest Wimbledon quest in ruthless fashion as she made up for a rain delay to crush France's Fiona Ferro 6-0, 6-1.

The powerful Spaniard, champion in 2017, raced to victory in 49 minutes on Court Two and came close to advancing without dropping a game as she led 6-0, 5-0.

Ferro showed some steel to avoid complete humiliation, nicking a game as 11th seed Muguruza netted a forehand, but it was only a temporary reprieve.

Muguruza is one of five former champions in the draw. 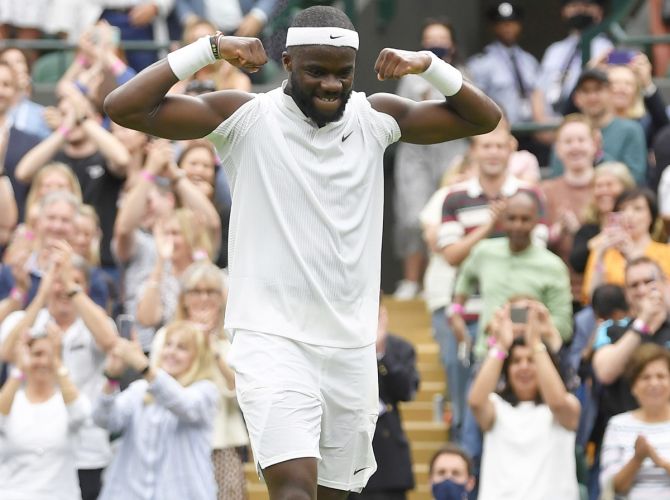 IMAGE: Frances Tiafoe of the US celebrates winning his first round match against Greece's Stefanos Tsitsipas. Photograph: Toby Melville/Reuters

Tsitsipas, playing his first match since his French Open final defeat by Novak Djokovic on June 13, was on the backfoot from the beginning against a 57th-ranked opponent who took the game to him.

The Greek also went out in the opening round on his last previous appearance at the grasscourt tournament in 2019, when he was seventh seed. Wimbledon was not played last year due to the COVID-19 pandemic.

"It sounds pretty damn good," Tiafoe told the cheering 6,000 strong Court One crowd, sheltered by a roof from the drizzle outside, as the result was read out.

"Definitely one of my best (matches). From start to finish it was pretty clean."

"This is what you train for, this is what it's all about. I live for these kind of moments. If you'd seen me on the side courts you might have seen a different performance today but I love this... got to make something good happen."

Tiafoe broke serve in the opening game and it set the tone for a match in which Tsitsipas, who had said at the weekend that he was feeling more confident on grass, showed only occasional flashes of brilliance.

He failed to convert any of his six break points.

Tiafoe went 5-4 up in the second set, after Tsitsipas saved two break points, and held his nerve when the Greek had three chances to break back.

The American broke serve again at the start of the third set, saved two break points and then had three match points on Tsitsipas' serve to wrap things up in just over two hours. He did it on the third as Tsitsipas netted a backhand.

"I've made a ton of changes and I'm trying to just move the right way. Obviously I'm not even close to where I want to be," said the 23-year-old Tiafoe of his performances to date. "I haven't even scratched the surface."

"Today was big. I definitely needed that. That guy's special, he's going to do a lot of great things... but not today."

Tsitsipas still has the doubles to play with his younger brother Petros.

Tiafoe's next opponent will be Spain's Roberto Carballes Baena or Canadian Vasek Pospisil. IMAGE: Sloane Stephens of the US in action during her first round match against Czech Republic's Petra Kvitova. Photograph: Paul Childs/Reuters

American Sloane Stephens won the battle of Grand Slam winners against twice Wimbledon champion Petra Kvitova, ousting the Czech 10th seed from the All England Club with a 6-3, 6-4 victory.

The 2017 US Open champion came into the match on Centre Court with a 2-1 head-to-head lead against Kvitova, who lifted the Venus Rosewater Dish in 2011 and 2014, but all their previous meetings had been on hard courts.

Former world number three Stephens, who has slipped down the rankings to 73rd, arrived in London without playing a lead-up event on grass but showed no signs of rust as she broke Kvitova's serve twice to take the opening set.

In the second set the 28-year-old picked up the crucial break in the seventh game and converted her first match point with her 11th winner to set up a clash with either fellow American lucky loser Kristie Ahn or Britain's Heather Watson. Second seed Aryna Sabalenka struck a barrage winners to blitz past Romanian qualifier Monica Niculescu 6-1, 6-4 and reach the second round of Wimbledon.

With persistent rain preventing play on the outside courts, the Belarusian kicked off the Championships under the closed roof on Court One and set the green grass on fire with her aggressive tennis.

The 23-year-old Sabalenka, 10 years younger than 191st-ranked Niculescu, produced winners at will off both her forehand and backhand to leave Niculescu powerless and rooted to the baseline for most of the match. IMAGE: General view as courts are prepared before the start of play. Photograph: Peter Nicholls/Reuters

Sabalenka, who hit 47 winners to the eight managed by her opponent, faced problems with her serve in the second set and was broken twice before sealing victory in 75 minutes with a crushing forehand down the line.

She will take on either American qualifier Danielle Lao or British wildcard Katie Boulter in the second round.

Swiatek swats aside Hsieh to make strong start at Wimbledon 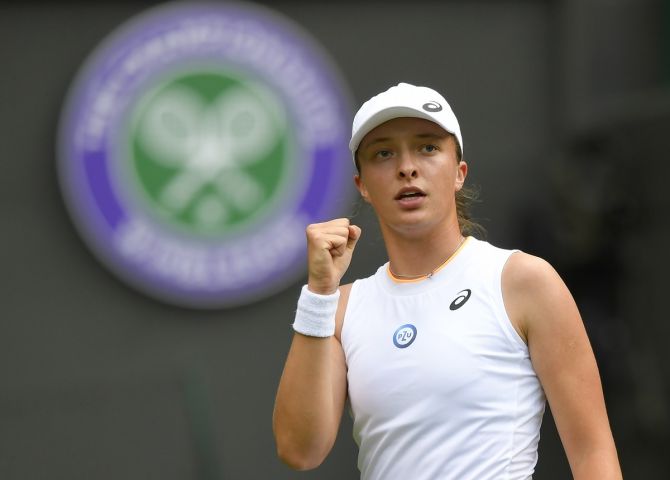 World number nine Iga Swiatek made a convincing start to her Wimbledon campaign with a 6-4, 6-4 win over the tricky Hsieh Su-wei of Taiwan for her first main draw victory in the Grand Slam.

Swiatek, who overcame Hsieh on the way to last year's French Open title, made a strong start on Court One with a break in the opening game but allowed her unorthodox opponent to hang on before taking the first set on serve.

Half of Hsieh's eight career wins against top-10 players have come at Grand Slams and the 35-year-old showed why she can be a difficult prospect for the best of players as she broke back after dropping her serve early in the second set.

Moving the ball around and peppering her game with trademark double-handed slices and drop shots, Hsieh stayed firm until 2-2 before she served a double fault and sent a lob long to hand seventh seed Swiatek the advantage again.

Swiatek lost in the opening round in 2019 but is no stranger to success at the All England club, having won the girls' title a year earlier, and the aggressive 20-year-old raised her level further to close out the win with an ace.