Images from Day 9 of the Wimbledon 2022 Championships at the All England Lawn Tennis and Croquet Club in London, on Tuesday. British ninth-seed Cameron Norrie reached his first Grand Slam semi-final when he twice came from behind to beat unseeded Belgian David Goffin 3-6, 7-5, 2-6, 6-3, 7-5 on Tuesday to set up a dream Wimbledon meeting with Novak Djokovic.

Having come into the match full of confidence after successive straight-set wins Norrie was surprisingly ragged in the first set. He rallied to take the second but then managed only two points in the first four games of the third as Goffin, also looking to make the last four at a major for the first time, took it without having to do anything extraordinary. 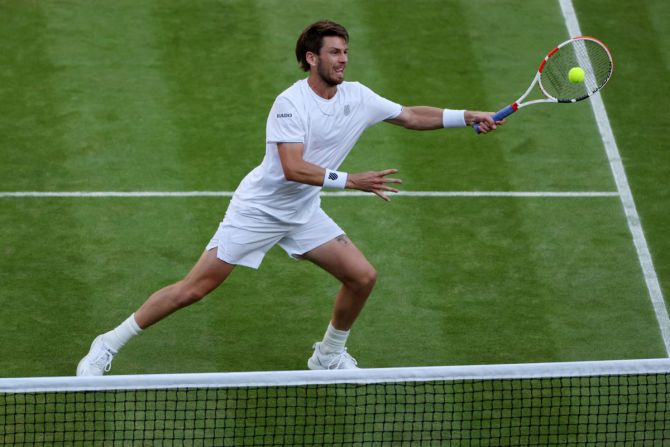 The Belgian was on court for four and a half hours in getting past Frances Tiafoe on Sunday and began to look a little tired in the fourth as Norrie upped his own intensity to level the match, much to the delight of a packed Number One Court.

There was little in it as they battled to 5-5 in the fifth set when Norrie somehow found an extra gear to blast through a service break to love and then served out safely to secure the biggest win of his career.

Djokovic battles back to beat Sinner

Just when Novak Djokovic's troubling year looked like hitting another low he salvaged his bid for a fourth successive Wimbledon title by coming back from two sets down to beat Italian Jannik Sinner on Tuesday.

In the end there was an air of inevitability about the outcome as the battle-hardened 35-year-old seized control to reach his 43rd Grand Slam semi-final and 11th at Wimbledon.

Djokovic has not been able to add to his 20 major titles this year after being deported before the Australian Open following a COVID-19 standoff and then losing to Rafael Nadal in the quarter-finals of the French Open.

But he kept alive the prospect of facing second seed Nadal in Sunday's final with a superb comeback, the seventh time in his career he has triumphed after losing the first two sets.

Sinner, who was bidding to follow in the footsteps of compatriot Matteo Berrettini who reached last year's final, showed why he is being tipped as a future Grand Slam champion but he faded in the face of a Djokovic onslaught.

When the Serbian produced a miraculous backhand winner on the slide to earn a break in the seventh game of the fourth set, ending on his belly in a superman posture, 10th seed Sinner knew that he was facing mission impossible.

The Italian belted a volley long on the next point and then Djokovic held to love to seal victory. IMAGE: Tunisian third seed Ons Jabeur has won 10 straight matches on grass, having arrived at the All England Club with a title in Berlin in the lead-up. Photograph: Shaun Botterill/Getty Images

Since going down in the opening round at this year's Roland Garros in a shock defeat, Jabeur has won 10 straight matches on grass, having arrived at the All England Club with a title in Berlin in the lead-up.

Currently playing at her highest career ranking of second, Jabeur will meet the 103rd-ranked Tatjana Maria, who earlier beat fellow German Jule Niemeier, for a place in Saturday's final.

Playing in her second straight Wimbledon quarter-final, Jabeur in the first set failed to find a way past the stoic defence of the 66th-ranked Bouzkova, who never made it past the second round of a Grand Slam before this year's championships.

The 23-year-old Bouzkova broke twice to take the opening set but Jabeur, bidding to become the first African woman to win a major, came roaring back to level the match with three breaks in the second.

Riding on the momentum, Jabeur again broke twice to rack up a 4-0 lead and win eight straight games before the Czech halted the juggernaut by getting a break back.

It proved to be only a minor hiccup for Jabeur who picked up another break in the next game and then held serve to love to seal the contest on her first match point. Experience overcame youth in the Wimbledon quarter-finals on Tuesday when 34-year-old Tatjana Maria beat Jule Niemeier, 22, 4-6, 6-2, 7-5 in an entertaining battle of German outsiders.

Both women started nervously, spraying errors on either side of the court but Niemeier, playing at her first Wimbledon, took the early initiative, breaking in the first game and grabbing the set when Maria, ranked 103, put a forehand wide. IMAGE: Tatjana Maria held her nerve in the final set, breaking back after dropping her serve in the fifth game, then taking the match when Jule Niemeier, on serve, netted on match point. Photograph: Ryan Pierse/Getty Images

Maria, who gave birth to her second child last year, upped her game in the second set, producing some telling returns, heavy slice and deft drop shots. She took the set with a volleyed winner on Niemeier's serve.

In a match of fluctuating fortunes, Niemeier could not find her rhythm on her biggest weapon - the serve -- producing 11 double faults.

Neither woman had reached a Grand Slam quarter-final before but Maria held her nerve in the final set, breaking back after dropping her serve in the fifth game, then taking the match when Niemeier, on serve, netted on match point. 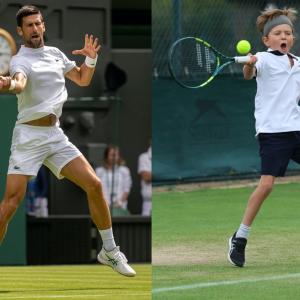