Reilly Opelka blasted his way into the third round at Wimbledon on Wednesday, the giant 21-year-old American's serve eventually proving too hot to handle for triple Grand Slam champion Stan Wawrinka in a high-octane five-set duel.

Opelka came through 7-5, 3-6, 4-6, 6-4, 8-6 against the 22nd seeded Swiss for the biggest win of his career and there will be plenty of bigger names in the draw now scrabbling anxiously for a tape of this match.

At 6ft 11in (2.10 metres) the former Wimbledon junior champion is the joint-tallest-ever ATP-ranked player (with Ivo Karlovic) and, unsurprisingly, his biggest weapon is his serve. It reached 142mph (228kph) on Wednesday - the fastest of the Championship so far - and, combined with some surprisingly deft court movement, is the perfect Wimbledon weapon.

Wawrinka, who has never gone beyond the quarter-finals at Wimbledon despite winning all three of the other slams and previously reaching number three in the world rankings, could not deal with it at all in the first set.

The 34-year-old eventually used all his experience to work things out and start getting it back and then treating the crowd to some of his sublime backhand winners en route to taking the second and third.

But, just as it seemed as if he would go through smoothly, Opelka found another gear to snatch the fourth.

From then on Wawrinka was having to work harder and harder to hold, while rarely threatening to break. The full match statistics showed the American successful with 73 percent of first serves compared to the 64 percent of Wawrinka and Opelka lifted that to a remarkable 91 percent in the fifth set.

Those figures proved the difference eventually as Wawrinka, at full stretch to even reach, let alone return most of them, was eventually worn down.

In a period of declining fortunes for American men's tennis, the victory was warmly welcomed former world number four and highly respected coach Brad Gilbert. "Wow, what a clutch performance from big fella Opelka in winning 1st career 5 setter over Stanimal," he tweeted.

Opelka, into the third round of a Grand Slam for the first time, now faces a possible meeting with 15th seed Milos Raonic.

Impressive Azarenka powers into third round 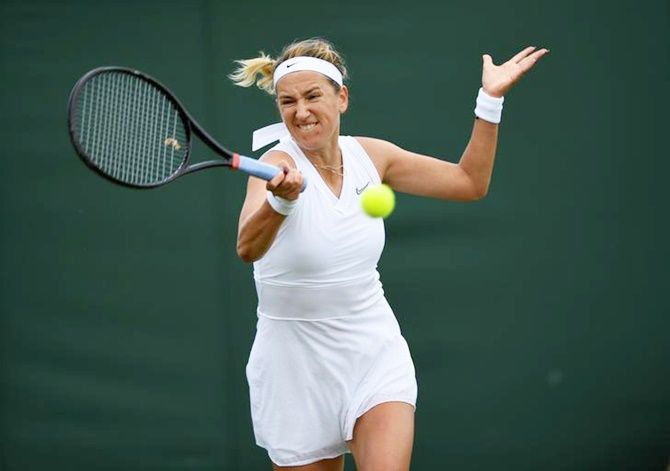 IMAGE: Victoria Azarenka in action during her second round match against Ajla Tomljanovic. Photograph: Tony O'Brien/Reuters

Former world number one Victoria Azarenka thrashed Australian Ajla Tomljanovic 6-2, 6-0 in the second round to continue her impressive start at Wimbledon.

The unseeded 29-year-old Belarussian produced an aggressive display to overpower her opponent and set up a third-round clash with Romanian Simona Halep, who beat fellow-Romanian Mihaela Buzarnescu 6-3, 4-6, 6-2 in a leter match.

Twice Grand Slam champion Azarenka's progress since returning to tennis two years ago following the birth of her son Leo has been steady rather than spectacular, not helped by a long-running custody battle with her former partner.

But there are signs she is beginning to rediscover the form and hunger that took her to Wimbledon semi-finals in 2011 and 2012 as well as quarter-final runs in 2009 and 2015.

Tomljanovic, ranked 49, simply could not cope with the intensity of Azarenka's play and subsided easily.

Azarenka, who beat Alize Cornet in the first round, is in the third round of a Grand Slam for only the third time since returning to the Tour in June 2017. 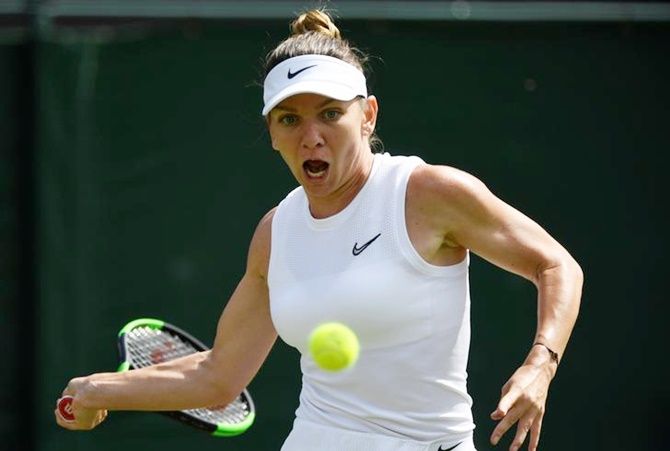 Seventh seed Halep appeared to be heading for an easy win when she was a set and 2-0 up against Mihaela Buzarnescu before her fellow-Romanian stormed back to take the second set.

Buzarnescu even stopped in her tracks midway through the seventh game of the second set to hand over a bottle of water to a spectator who had fainted in the stands.

But Halep was less charitable and turfed her compatriot out of the championships with a 6-3, 4-6, 6-2 defeat.

Twelve months ago Halep perished in the third round despite being top seed and she will be hoping for better fortune on Friday when she faces Azarenka.

"It's going to be a big challenge for me, tough one, because she's ... very aggressive," said Halep, who has won two her four meetings with Azarenka, including at Wimbledon in 2017.

"I have to be strong on my legs to be ready for her strokes because she hits very strong." 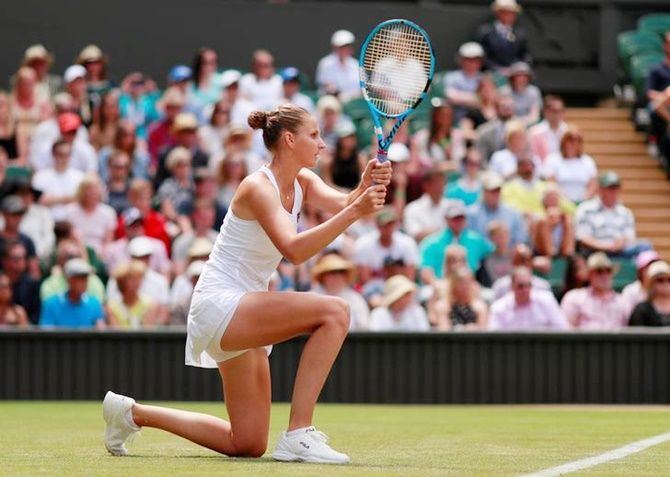 Karolina Pliskova has long been thought of as a Grand Slam champion-in-waiting and the Czech provided evidence of her grasscourt pedigree on Wednesday as she hurtled past Monica Puig 6-0, 6-4 in the second round.

"I feel like I'm improving every day on grass," said Pliskova, who arrived at Wimbledon full of confidence after scooping her third WTA title on grass at Eastbourne last week.

"The title in Eastbourne helped me feel more confident and to get more used to the surface."

But if Pliskova was hoping her success at Eastbourne would easily translate to a Wimbledon title, she will have to buck recent trends as fellow Czech Jana Novotna was the last woman to have pulled off the feat 21 years ago.

On Wednesday, though, Pliskova showed why she is considered as one of the front runners for this year's Wimbledon crown.

Watched on by former Formula One driver David Coulthard from the Royal Box, the third seed appeared to be in the fast lane to victory as she dropped only two points on serve to zoom through the first set in 20 minutes.

At the other end of Centre Court, a double fault on set point summed up the kind of torturous day Olympic champion Puig was having to endure.

But just when it seemed the race was on for Pliskova to produce the first double bagel of this year's championships, the Puerto Rican drew a prolonged round of sympathetic applause as she finally won a game in the second game of the second set.

However, her Czech opponent, who could topple Ashleigh Barty from the WTA rankings summit if she reaches the latter stages of the grasscourt major, was not exactly in a charitable mood as she broke Puig to go 3-1 ahead and served for the match at 5-3.

Being on the edge of defeat allowed Puig to come out swinging in the ninth game as she broke Pliskova.

But if that gave Puig a glint of hope for an upset, the Czech quickly snuffed out such thoughts by breaking the 25-year-old in the very next game to seal a third-round match with Taiwanese 28th seed Hsieh Su-wei, who beat Kirsten Flipkens 7-6(3), 6-3.