Leander Paes and Mahesh Bhupathi rallied splendidly to make it to the second round of the men's doubles at Wimbledon on Friday.

It was a good day for India at the All-England Club, as Sania Mirza and Somdev Devvarman also progressed.

Sania and her Russian partner Elena Vesnina made it to the third round after a hard-earned victory over Czech Renata Voracova and Galina Voskoboeva of Kazakhastan.

The fourth seeded Indo-Russian pair, which scored a comfortable 6-0, 7-6 (7-4) victory over the Russian-American combine of Anna Chakvetadze and Melanie Oudin on Thursday in the first round, prevailed 6-3, 5-7, 6-4.

Somdev and Japan's Kei Nishikori got the better of Germany's Rainer Schuettler and Alexander Waske 6-7 (3), 6-3, 6-2 in another first round men's doubles match. 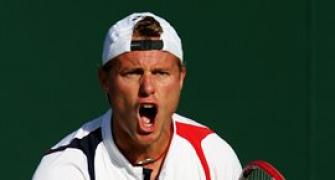