Novak Djokovic: From sidekick to superstar!

Having spent a whopping 91 consecutive weeks as world No 3, Novak Djokovic was, at best, considered just strong supporting player in the Federer-Nadal show. The No 1 ranking, and Wimbledon triumph, says Senior Associate Editor Bikash Mohapatra, has set the record straight.

It was akin to a long-running soap opera -- a story of two lead players involved in a game of one-upmanship. The other players in the show were consigned to supporting parts, or, at most, given guest appearances (read ephemeral glory).

For seven-and-a-half years the world No.1 ranking remained a duopoly -- Roger Federer and Rafael Nadal making it a personal battle and keeping the rest at bay. The Federer - Nadal combine won 25 of the 31 Grand Slam titles in that period and a chunk of the other major trophies.

Since American Andy Roddick held the top spot in January 2004, there was no third claimant to the throne. And only four managed to overcome the twin-hurdle and lay their hands on a major title. 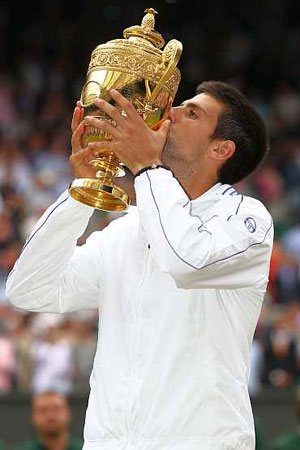 The latest rankings released by the ATP on Monday (July 4, 2011), though, witnessed that long-running soap getting dislodged from the top slot. Its place has been taken by a saga, about the struggles of a man and his eventual triumph!

And the lead actor in this saga is one Novak Djokovic, nicknamed Djoker by his adoring fans.

Yes, he is the same guy who had impressed in his supporting role in the last five years while also making a few surprise appearances (read as No 2 player).

Djokovic had palpably become tired of enacting the same role for years and desperately wanted to play a new part, one that was challenging. However, it was the lack of a proper script that hindered his growth.

The stagnation was apparent.

Having spent a whopping 91 consecutive weeks as the world No 3 (a record), Djokovic was, at best, considered a strong supporting player, not the lead.

Even a successful cameo (read the Australian Open triumph in 2008) didn't earn him the respect he was looking out for. In the 11 major tournaments that followed his triumph in Melbourne, the Serbian made just two exits before the last eight stages, reached the semi-finals on four occasions and the final at the US Open last year before being beaten by Nadal.

However, the last of those results couldn't camouflage the fact that he had had a forgettable 2010. This, despite attaining the No.2 rank in January (after the Aus Open) and defending a title for the first time in his career (in Dubai). The Serbian won just one more title (in Beijing) in the rest of the season.

It was towards the end of last year that Djokovic realized that if he wanted to succeed, he would have to write his own script.

The introspection ensured instant success -- the Serbian led his country to its maiden Davis Cup title, winning both his matches.

The off-season that followed was utilized to good effect. Besides honing his existing set of skills, Djokovic added a new set to his repertoire.

The Serbian's team then got down to identifying the weaknesses in his game and making the necessary corrections. The psychological aspect was given detailed attention, as was the physical part.

The player also lent a ear to any constructive criticism from within his core group -- when his nutritionist, for example, pointed out an allergy to gluten, the player had it purged from his diet.

And with the New Year arrived a new, recharged Djokovic.

The first test of the season came at the Australian Open. And the player passed it with flying colours, beating Federer and Andy Murray (in the final) en route.

Going into the year's second major, the French Open, Djokovic was unbeaten in 36 matches in the year. At Roland Garros, he won five matches en route to the semi-finals.

Then came the lone blemish of the season, Federer beat him in four sets, thereby ending his 41-match winning streak  one short of John McEnroe's record of most wins (42) at the start of a season in 1984.

Coming to the year's third major, the Wimbledon, Djokovic's record on grass was commendable  two semi-final appearances at the All England Club (in 2007 and 2010) interspersed with final losses at the warm-up tournaments in Queen's Club (2008) and Halle (2009).

Despite that there were doubts regarding his pedigree on the surface. A relatively smooth ride to the last four stage, followed by a fairly convincing win over Frenchman Jo-Wilfried Tsonga -- who had a 5-2 head-to-head record against the Serb and had upset six-time champion Federer in the previous round -- silenced a few detractors.

But there were many who gave the 24-year-old little chance against Nadal in the final. This, despite having beaten Nadal in four finals this year. 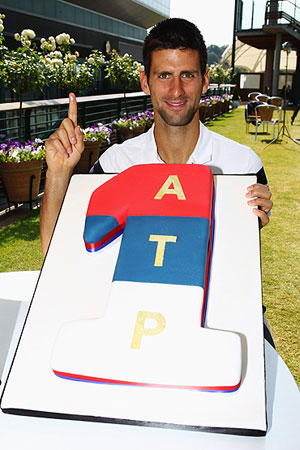 The odds were stacked against Djokovic. The top-seeded Spaniard had not lost at Wimbledon since the 2007 final (to Federer) and was riding a 20-match streak. Besides, he had not lost to the Serb in five Grand Slam matches.

However, an inspired Djokovic turned tables on this occasion, winning in four sets (6-4, 6-1, 1-6, 6-3) to secure his maiden Wimbledon title, thereby realizing his childhood dream.

His win against Tsonga on Friday ensured he would end the Spaniard's 56-week stay at the top. Sunday's triumph over the top seed confirmed his status as the same.

With just one defeat in 49 matches this year, Djokovic has ensured he deserves his latest achievement -- he was officially unveiled as the 25th player to top the rankings when the ATP published its list on Monday.

However, in the last six months he has, by virtue of his performances, ensured his overall records show a marked improvement. Besides, he is laughing his way to the bank, with a fourth ($7, 608, 673) of his career earnings ($ 27, 871, 630) coming in that period alone.

More importantly, he has won the battle with his own mind  winning matches he would have lost not long back.

Considering he has little to defend this year (in terms of points), it is safe to say that Djokovic will finish the year as the best player on tour.

For the moment, though, the Serbian needs to be applauded in his new role as a leading player. His many supporting acts are now a thing of the past.

On this occasion, the 'Djoker' has set the record straight, scripted his own success story and consigned two established players to supporting roles.