The mercury was rising at Wimbledon on Saturday as the serial trophy hunters gathered in the last 16 with defending champions Rafa Nadal, Serena Williams and Roger Federer leading the charge.

Nadal was in miserly mood as he reached the business end of yet another grand slam by finishing off plucky Luxembourger Gilles Muller 7-6, 7-6, 6-0 on Number One court.

Williams, seeded seventh after her return from 11 months of health problems, made the most emphatic statement yet about her prospects by blasting past Russia's Maria Kirilenko 6-3, 6-2. 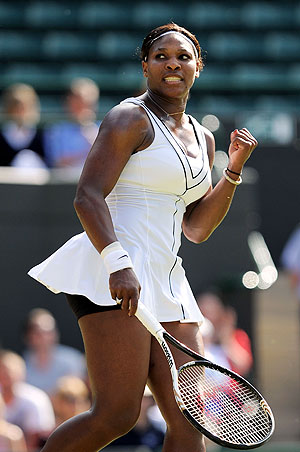 The scheduling of the top women's players on what is the club's third court has been a bone of contention this week after Serena Williams, five-times winner Venus Williams and world number one Caroline Wozniacki have all made their way though the walkways to the sunken bowl.

She then made way for the club's most decorated member to strut his stuff in the sunshine.

After a stop-start tournament so far, the 125th championships are now simmering nicely with all the ingredients in place for a tasty second week.

"Monday will be kind of cool when all the men play at the same time," said 29-year-old third seed Federer, who will play Spain's Nicolas Almagro or Mikhail Youzhny.

Nadal, defending his title for the first time after injury deprived him of the honour in 2009, returned to Court One a set to the good after rain had stopped play on Friday. After more dogged resistance from wildcard Muller, the last man to beat him at Wimbledon other than Federer, Nadal roared through.

"Seems like the best players are all playing well," the 25-year-old told reporters. "I don't know if I gonna win my next round. Probably the rest of the players thinks the same.

Nadal, who committed just three unforced errors against Muller and is yet to drop a set, had reason for caution as his last 16 opponent is 2009 U.S. champion Juan Martin del Potro after the Argentine powerhouse beat Frenchman Gilles Simon.

"I'm not lucky to play against Del Potro in the round of 16," he added. "But that's what it is, and I have to be playing my best tennis to try to win."

Nadal complained of a slight thigh injury after dispatching Muller, the result of a slip on Friday when he was required to save two set points, but there was little evidence of any chinks in his armour.

Left-handed Muller has never really fulfilled his potential since his 2005 victory over Nadal but he dug in and was still very much a threat until 5-5 in the second-set tiebreak when one lapse was seized upon ruthlessly by the 25-year-old Mallorcan.

Two sets down to Nadal when you are playing at 100 percent of your ability is not an enviable position and Muller's resistance evaporated quickly.

"The third set, two sets to love, I am able to play with less pressure," Nadal said. "I started to return unbelievable and to play at very high level."

Sixth seed Tomas Berdych, the man Nadal beat to claim his second Wimbledon crown last year, is also looking a threat again after an easy third-round win over Alex Bogomolov Jr., a result that left Mardy Fish as the sole American survivor in the men's draw.

"It's lonely. It doesn't feel great. And that's not the goal," 10th seed Fish, who faces Berdych next, said.

Ninth seed Gael Monfils, an under-achiever at grand slam level, bowed out to Polish doubles specialist Lukasz Kubot who reached the last 16 of a major singles draw for the second time in his career.

Not all the grand slam champions in the draws will be around for the second week, though.