Williams ready to find new Serena after US Open exit IMAGE: Serena Williams indicated her intention to retire in a Vogue article in early August, saying she was ‘evolving away from tennis’ but never confirming the US Open as her final event. Photograph: Mike Segar/Reuters

A defiant Serena Williams bid an emotional good-bye to the US Open with a third-round loss to Ajla Tomljanovic on Friday, in what may have been the last singles match of her glittering career.

Defeat has always been hard to swallow for the fiercely competitive Williams and no doubt the 7-5, 6-7 (4), 6-1 loss to the 46th ranked Australian stung her to her core.

But after a joyous run into the third round there was no shame in a loss to the gritty Tomljanovic, allowing the 23-time Grand Slam winner to exit with dignity intact and head held high.

Her three matches, highlighted by a second-round win over world number two Anett Kontaveit, were a gift to her fans, the relentless never-surrender attitude that made her tennis' dominant player for over two decades on display right until the very final point.

"Clearly I'm still capable," Williams told reporters. "But it takes a lot more than that."

"I'm ready to be a mom, explore a different version of Serena."

"Technically in the world I'm still super young, so I want to have a little bit of a life while I'm still walking."

"I have such a bright future ahead of me."

Always up for a fight, the 40-year-old came out swinging, forcing Tomljanovic to go the distance.

The Australian needed six match points to deliver the knockout punch and bring an end to an engrossing three-plus-hour slugfest.

Without a WTA Tour title and never before going beyond the quarter-finals of any Grand Slam, Tomljanovic has spent most her career as one of tennis' lesser-known names.

But now the 29-year-old will live on forever in tennis history and at sport trivia pub nights, as the answer to the question; "Who was the last player to beat Serena Williams".

"I don't think I've been part of tennis history, so that's pretty cool."

Williams had signalled her intention to retire in a Vogue article in early August, saying she was "evolving away from tennis" but never confirming the U.S. Open as her final event.

Given the opportunity to put speculation to rest that the US Open may not be the end, Williams left the door open just a crack.

Asked whether she might be tempted to return to tennis, she responded: “I don’t think so but you never know.”

"I always did love Australia, though," she later told reporters, hinting at a tilt at the Australian Open in January.

For fans, however, the message was clear, the US Open would be where Williams would take her final bow.

The raucous New York crowd that had backed her from the very beginning and over the years, fuelling her runs to six US Open titles, was in her corner once again but could not lift her to one more win.

Tomljanovic, who is yet to win a WTA Tour tournament, appeared to have had little chance against Williams, winner of 73 career titles, but would not be intimidated.

Before stepping out onto center court Tomljanovic paused for a moment and touched the plaque quoting Billie Jean King that hangs at the entrance: “Pressure is a Privilege”.

"I liked the quote," explained Tomljanovic. "I felt pressure, from myself, where I'm at in my career."

"I feel like I belong here now. That's why I expect myself to perform well in these circumstances. When I saw that, yeah, just felt right."

Despite an electric atmosphere the match got off to a sluggish start with the players trading breaks before settling in.

Williams had looked to seize control when she broke Tomljanovic to go ahead 5-3 and serving for the set.

But with Williams two points from a 1-0 lead Tomljanovic dug in, breaking back and sweeping four straight games to steal the set, leaving the stadium stunned.

A defiant Williams, as she has done so many times, lifted her game hitting back in ruthless style in the second and breaking the Australian twice on the way to 4-0.

Playing her fourth match in five nights, Williams suddenly seemed to run out of gas and Tomljanovic, showing some steel of her own, pulled level at 5-5 as the set moved to a tie-break.

Everyone inside Arthur Ashe, now on their feet, knew Williams was not going to exit without a fight, and running on fumes dug into her reserves to take the tie-break 7-4.

Williams had the crowd roaring again when she broke Tomljanovic to start the third but simply had nothing left in the tank. The Australian put the former-world number on the ropes, storming through the next four games for a 4-1 lead.

But Williams was not going to hand Tomljanovic the win, she would have to earn it, needing six match points to get the job done. 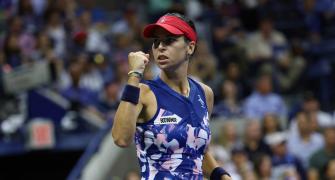 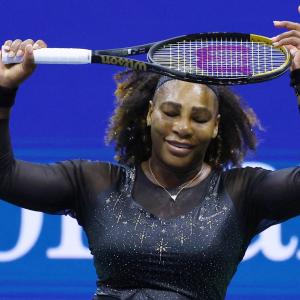