Hou Yifan said she had been upset with the pairings throughout the tournament as she had drawn seven women players out of 10 rounds at the Tradewise Gibraltar Chess tournament. 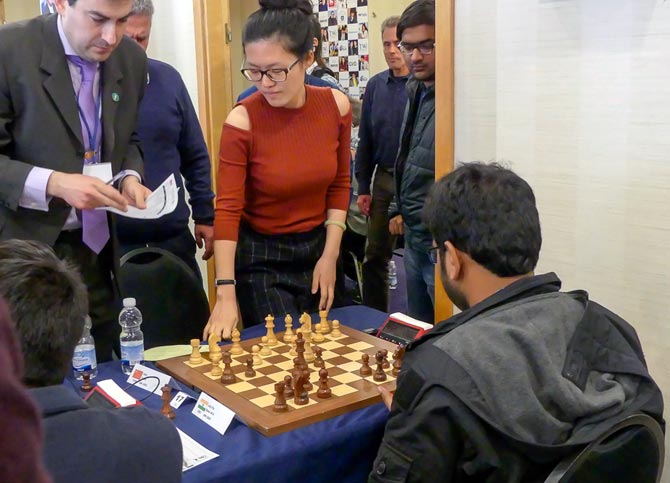 Women's World chess Champion Hou Yifan of China left everyone stunned at the Tradewise Gibraltar Chess tournament when she resigned in a controversial fashion after just five moves in her 10th and final round game against India's Lalith Babu, in Gibraltar, on Thursday.

Yifan, 22, said she had been upset with the pairings throughout the tournament as she had drawn seven women players out of 10 rounds.

"It makes me really, really upset. Not just for me but for the other women players," she was quoted as saying.

Later, Yifan apologised for giving away her game.

"I apologise to all chess players, fans and those following the tournament. As you may notice that seven women pairing from nine rounds from the very beginning, made me feel quite upset and unhappy for this unbelievable and weird pairings," she said in an interview shortly afterwards her pull out.

The Gibraltar Chess Festival is an open tournament, where players of both sexes participate and compete against each other.

Tournament organiser, Brian Callaghan, said he was disappointed at what had happened and felt she had let herself down.

'Being a World Champion he said brought with it a great responsibility,' he said.

Although sympathetic about her reason for giving her game away, Callaghan was quite clear that he did not believe the pairings had been wrong or that the move by Hou Yifan had damaged the tournament. But he did refer to the world champion having had a 'bad day at the office'.

Hikaru Nakamura of the US won the tournament for a third consecutive year after he beat Spain's David Anton Guijarro after a tense two-game speed playoff, while Ju Wenjun won the women's prize.