Why the Zika virus is causing alarm

Global health officials are racing to better understand the Zika virus behind a major outbreak that began in Brazil last year and has spread to many countries in the Americas. 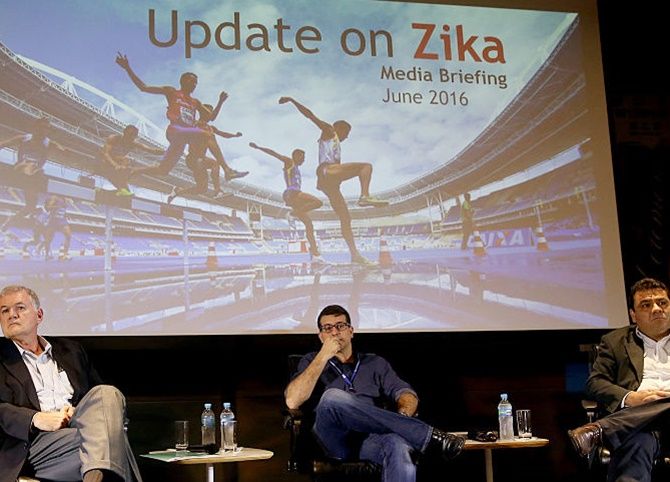 The following are some questions and answers about the virus and current outbreak:

How do people become infected?

Zika is transmitted to people through the bite of infected female mosquitoes, primarily the Aedes aegypti mosquito, the same type that spreads dengue, chikungunya and yellow fever. The Pan American Health Organization (PAHO) said Aedes mosquitoes are found in all countries in the Americas except Canada and continental Chile, and the virus will likely reach all countries and territories of the region where Aedes mosquitoes are found.

How do you treat Zika?

There is no treatment or vaccine for Zika infection. Companies and scientists are racing to develop a safe and effective vaccine for Zika, but the World Health Organization (WHO) had said it would take at least 18 months to start large-scale clinical trials of potential preventative shots.

How dangerous is it?

The U.S. Centers for Disease Control and Prevention concluded that infection with the Zika virus in pregnant women is a cause of the birth defect microcephaly and other severe brain abnormalities in babies. The CDC said now that the causal relationship has been established, several important questions must still be answered with studies that could take years.

According to the World Health Organization, there is strong scientific consensus that Zika can cause the birth defect microcephaly in babies, a condition defined by unusually small heads that can result in developmental problems. In addition, the agency said it could cause Guillain-Barre syndrome, a rare neurological disorder that can result in paralysis. Conclusive proof of the damage caused by Zika may take months or years.

Brazil registered 91,387 likely cases of the Zika virus from February until April 2.

Current research in Brazil indicates the greatest microcephaly risk is associated with infection during the first trimester of pregnancy, but health officials have warned an impact could be seen in later weeks. Recent studies have shown evidence of Zika in amniotic fluid, placenta and fetal brain tissue.

What are the symptoms of Zika infection?

People infected with Zika may have a mild fever, skin rash, conjunctivitis, muscle and joint pain and fatigue that can last for two to seven days. But as many as 80 percent of people infected never develop symptoms. The symptoms are similar to those of dengue or chikungunya, which are transmitted by the same type of mosquito.

How can Zika be contained?

Efforts to control the spread of the virus focus on eliminating mosquito breeding sites and taking precautions against mosquito bites such as using insect repellent and mosquito nets. U.S. and international health officials have advised pregnant women to avoid travel to Latin American and Caribbean countries where they may be exposed to Zika.

How widespread is the outbreak?

Active Zika outbreaks have been reported in at least 51 countries or territories, most of them in the Americas, according to the U.S. Centers for Disease Control and Prevention (CDC). Brazil has been the country most affected.

What is the history of the Zika virus?

The World Health Organization (WHO) said sexual transmission is "relatively common" and has advised pregnant women not to travel to areas with ongoing outbreaks of Zika virus. It also advised women living in areas where the virus is being transmitted to delay getting pregnant.

The US CDC is investigating about a dozen cases of possible sexual transmission. Those cases involved possible transmission of the virus from men to their sex partners.

But the CDC issued updated recommendations for preventing and testing for Zika infection on July 25, warning that the virus can be transmitted through unprotected sex with an infected female partner.

A reported case of female-to-male sexual transmission in New York City, and limited human and non-human primate data indicating that Zika virus RNA can be detected in vaginal secretions, led to the new warning, the agency said.

CDC's expanded warnings on sexual exposure to Zika now caution against sex without a condom or other barrier method of protection with any person, male or female, who has traveled to or lives in an area with Zika, including female to female transmission with a pregnant partner.

British health officials reported Zika was found in a man's semen two months after he was infected, suggesting the virus may linger in semen long after infection symptoms fade.

The WHO has identified Zika cases in Argentina, Chile, France, Italy and New Zealand as likely caused by sexual transmission.

What other complications are associated with Zika?

Zika has also been associated with other neurological disorders, including serious brain and spinal cord infections. The long-term health consequences of Zika infection are unclear. Other uncertainties surround the incubation period of the virus and how Zika interacts with other viruses that are transmitted by mosquitoes, such as dengue.