'And that was what I missed the most when I saw Nadal play in Delhi, the banter with my mom, because she's gone and I won't get to share that moment with her.'
'Superfan' Roshneesh Kmaneck on watching Rafa in person. 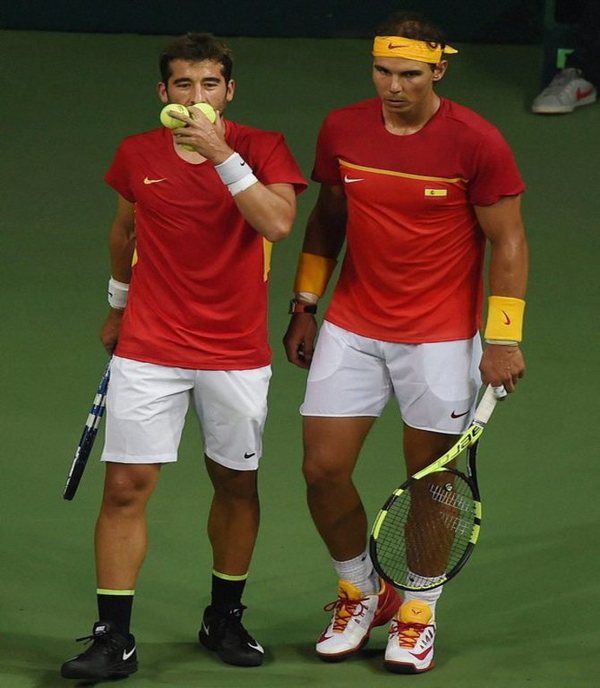 And the reason is that over the weekend I finally got to see my hero, my idol -- 14 time Grand Slam winner Rafael Nadal.

I have always followed Tennis, since I can remember.

The fabulous forehands, the blistering backhands and the sheer endurance, will and athleticism of Tennis has always appealed to me.

Then in 2005, Rafael Nadal, a 19-year-old teenager, wearing capris and showing off his bulging biceps, arrived at the French Open, wining all three clay court lead-up tournaments -- in Monte Carlo, Barcelona and Rome.

He was the favourite to win the French Open, which he did after taking out Roger Federer, the World Number 1, in the semi final and two days later he became the youngest Grand Slam champion after beating Argentina's Mariano Puerta in four sets.

For me, that was the moment, I became a fan, nay superfan, of the 'the Matador' and have been ever since.

From that moment, the Spaniard, known for his never die attitude and the physicality of his game, went on and won Grand Slam after Grand Slam -- including nine French Opens -- a record he holds alone.

For Nadal it hasn't always been a 'high' game. He's had some horrible lows -- including injuries ranging from his knee to his wrist -- which has led him to pull out of tournaments, and also some crushing defeats.

For Nadal fans like me, his losses came as a bitter blow, some even questioning if the Spaniard should continue playing.

For me, Nadal is Nadal and I love him nonetheless.

When it was announced that he would be part of the Spanish Davis Cup team playing in Delhi, I had to seize the opportunity and watch my idol play.

So, I packed my bags and rushed off to Delhi.

Sitting in the stands, I was elated, jubilant when he walked out on court with Marc Lopez and played the doubles match against Leander Paes and Saketh Myneni.

I celebrated each point he won, was disappointed each time the Spaniards lost a point.

Amidst all this, there was a twinge of sorrow.

At home, I would monopolise the TV and watch Nadal play, forcing my mom to watch the matches with me.

She would sit with me and poke fun at him, especially when he would pull his shorts out from his rear, just to get me all riled up.

The banter and bickering with mom over Nadal and if he was the greatest, which she argued was not, brought us closer.

She would always laugh and celebrate with me when he won and then also being the caring mother that she was would console me when he lost.

And that was what I missed the most when I saw Nadal play in Delhi, the banter with my mom, because she's gone and I won't get to share that moment with her.

I know she would have looked down on me that day, smiling that I finally got to see him play.

So, for that, I would like to say, 'Thank you Nadal. For the fine Tennis and for the memories I share with my mom about you.'