Padukone's academy clarifies it had no role in Saina Nehwal leaving the Gopichand Academy. 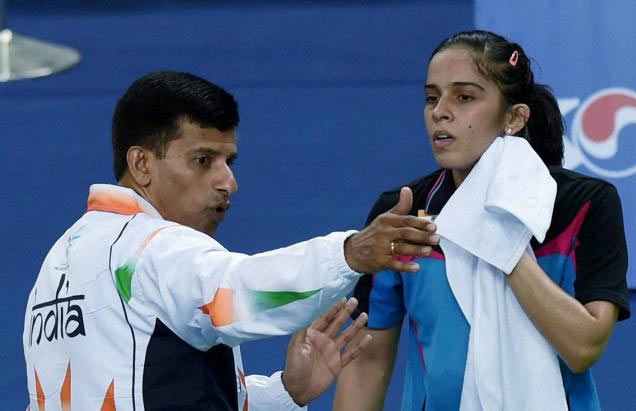 IMAGE: Vimal Kumar, left, trained Saina Nehwal during her slump period that saw her attain the world No. 1 ranking and winning silver at the All England and World Championships. Photograph: PTI

The Prakash Padukone Badminton Academy clarified that it played no role in Saina Nehwal shifting from the Gopichand Academy in Hyderabad to Bengaluru to train under Vimal Kumar ahead of the Rio Olympics, saying the move was the "sole decision" of the ace shuttler.

Gopichand, in a chapter titled ‘Bitter Rivalry' of an upcoming book Dreams of a Billion: India and the Olympic Games, revealed how miserable he felt when Saina decided to join Padukone's academy to train under Vimal Kumar in Bengaluru after the 2014 World Championship.

"PPBA did not have any role to play in Saina Nehwal's decision to move to Bangalore and train at PPBA," read a statement from the Padukone academy.

"However, Vimal Kumar did help Saina in her slump period that saw her attain World No.1 ranking, besides getting silver medal at the All England Championships and World Championships."

In the book, Gopichand also wondered why the legendary Padukone, India's first badminton superstar "never had anything positive to say about him".

Gopichand himself had trained under Padukone before deciding to work under coach Ganguly Prasad ahead of his All England victory in 2001.

"PPBA has been grooming players over the last 25 years and has always stood for supporting their interest in whatever way we can. We have too many players moving on from our Academy at various stages in their career. We have never believed in restricting their growth, and that will continue to be academy's policy.

"The sporting careers of international athletes competing at the highest levels is relatively short, therefore it is up to each player to decide whatever is in his/her interests and make the most of the opportunities available to achieve their respective goals during their peak period," the Padukone academy said.