News
Business
Movies
Sports
Cricket
Get Ahead
Money Tips
Shopping
Sign in  |  Create a Rediffmail account
Rediff.com  » Sports » Why have Liverpool gone from monsters to minnows?

Why have Liverpool gone from monsters to minnows? IMAGE: Six successive home defeats have put champions Liverpool's top four finish in doubt as their collapse from the leading team in the land has been fast and furious. Photograph: Laurence Griffiths/Reuters

Liverpool's defence of a Premier League crown won at a canter last season has become a nightmare as Juergen Klopp's once-imperious side implodes and sets unwanted club records.

An unprecedented sixth successive Anfield defeat, this time by relegation-threatened Fulham on Sunday, marks not only their worst-ever run at their former fortress, but has put a top four finish in doubt as their collapse from the leading team in the land has been fast and furious.

The statistics make grim reading. Simon Gleave, head of sports analysis at Nielsen's Gracenote, says Liverpool are the only club in Europe’s top five leagues not to have picked up a point at home in their last six matches, and are 89th out of 98 clubs for their overall record in the previous half dozen games.

The slump is all the more extraordinary as it comes after they were previously unbeaten at home for 68 games over almost four years.

Not including penalties and own goals, they have failed to score with any of their last 115 shots at Anfield in the Premier League. This is the longest barren run by any side at home since records began in the 2006-07 season.

They have now lost nine times in 28 matches in the league so far this campaign, the same number as the total of the three previous seasons combined in a run of 114 games.

Their tackle success rate is at 57% this season, having hovered in the 70-80% range for much of the last decade, while the 36 goals they have conceded is already more than last season's total (33), or the campaign before (22) when they finished runners-up.

So what has gone wrong? Below, Reuters sports journalists give their views.

From monsters to minnows

Klopp has frequently spoken of his preference to operate a tight knit squad, and there is no doubt it helped foster the ‘Mentality Monster’ attitude of which the German waxed lyrical, with stunning comeback victories against Barcelona and Aston Villa fine examples.

A smaller playing squad also meant it was easier for Klopp and his coaching staff to implement their high-pressing, all-action style. But such an intense approach takes its toll on ageing bodies.

Of the XI who started the 2018 Champions League final, only Dejan Lovren is no longer at the club, and a lack of reinforcements combined with shallow squad depth means the same players have been asked to go to the well again and again over the last four years.

That has ultimately resulted in crippling injuries and, with it, some hapless performances that have seen, as their former player Jamie Carragher said on Sky Sports, the mentality monsters transform into ‘mentality midgets’. -- Joseph Walker, Sports Correspondent, Spain 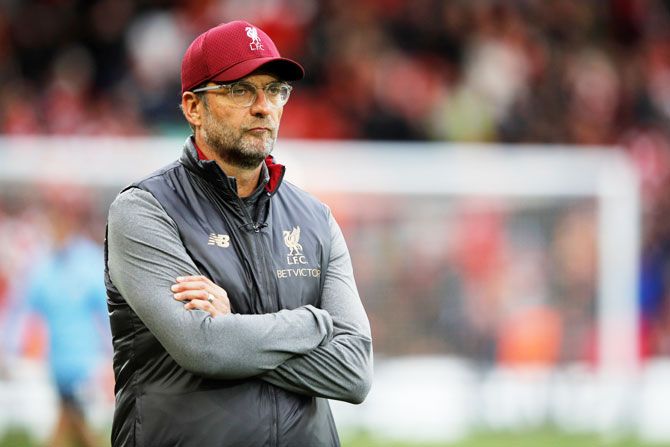 Last December, when Klopp was speaking out about the strain on his squad created by fixture congestion and dreading the Christmas pile-up, Liverpool faced Midtjylland in a Champions League dead rubber, yet he played Mo Salah, who had featured in 18 of the team’s 20 games to that point, for the entire match.

Salah came away happy as his goal in the 1-1 draw made him the club’s record Champions League scorer but, taking the long view, it seemed a glaring missed opportunity to give the Egyptian a proper rest in a congested period.

Klopp defended his position, pointing out that he had fielded the club’s youngest-ever Champions League team, but Salah, Trent Alexander-Arnold, Fabinho and Diogo Jota surely did not need to play at all.

That first team squad, who have played with huge intensity for two or three seasons, now look tired and jaded and have done for a while, but even before the current slump Klopp was still wary of giving his main men a break.

Divock Origi might not be at the same level as the first-choice front three but, as a regular Belgium international, he is surely trustworthy enough to bring on for more than a few minutes once the main men have yet again run themselves into the ground. -- Mitch Phillips, Europe Sports Editor

Michael Edwards has, quite rightly, been widely praised for his ability to recruit the perfect players for Klopp’s system, with the sporting director instrumental in bringing Salah, Roberto Firmino and Sadio Mane to the club.

But since assembling a title-winning unit, Edwards has not addressed one issue that was always going to rear its head when injuries started to happen – Liverpool’s strength in depth, or lack of.

When everyone is fully fit in both Liverpool and Manchester City’s squads, one look at their benches tells you all you need to know about the gulf in class in reserve. Players like Origi and Xherdan Shaqiri are Liverpool’s Plan B, and that is not good enough.

There is also an element of Edwards and his team resting on their laurels. With the exception of Diogo Jota, no recent signing has really seemed up to standard. -- Pete Hall, Reuters Soccer Writer, London

A failure to adapt Losing so many key players to injury may be unfortunate, but failing to adapt the team’s style of play to compensate for that appears foolish. Liverpool can play through any team in the world when their high-press system is utilised by their best XI.

Without their regular backline and with the midfield shuffles made to try to fill the holes, the whole system fails to click into top gear and is missing its crucial cogs.

Other teams have elected to adapt in this demanding and highly unusual season, with matches coming thick and fast and rearranged at short notice.

Indeed, across Stanley Park, Carlo Ancelotti has overcome key injuries to lead his Everton side to a rare victory at Anfield and an equally rare spell of superiority in the standings.

Klopp's dedication to his previously successful style could prove his team's downfall – not unlike his final season at Borussia Dortmund where they finished seventh having been runners-up the year before. -- Christian Radnedge, Sports Editor, London

The injury curse and loss of Van Dijk The main reason for Liverpool’s collapse is the loss of central defender Virgil Van Dijk to a season-ending injury.

That was quickly followed by serious injuries to Joe Gomez and Joel Matip and the bewildering decision by the club not to buy at least one proven defender in the January transfer window.

Those issues were compounded by an injury to captain Jordan Henderson, who could have continued as a useful emergency defender and would have provided strong leadership during a difficult time. -- Ed Osmond, sports editor, London

No rotation, no win

Liverpool's losing run at Anfield has been marked by a lethargic look, not least in attack. Though Klopp undoubtedly has world-class talent to choose from, the relative lack of depth in their squad has forced him to pick the same players over and over again.

Striker Jota’s injury robbed the manager of a key rotation piece but surely a bigger role could have been found for Origi amid a weary squad?

Klopp’s reluctance to trust players outside a chosen few has added to the inevitable fatigue of a compacted season, a mistake compounded by his reluctance to bring his lesser lights off the bench until very late on in most games. – Phil O’Connor, sports correspondent, Sweden

Professional players should not need a crowd to perform, but there is no doubt that Liverpool, like all Premier League teams, are missing fans in the stadium.

Instead of being roared on by over 50,000 fans at Anfield, their poor displays are met with the sound of silence from the Kop and only Klopp’s fury in the dug-out.

It is easy to imagine the din of disapproval had the current home run been played out in a capacity stadium, which would surely have spurred on tired bodies and minds when the chips were down.

Anfield is an intimidating place to play when full, but that fear-factor has gone for now.

Statistics show that away teams are winning more on the road this season, and that is certainly the case at Anfield, where Liverpool are suffering more than most from a lack of fans. -- Nick Said, sports correspondent, South Africa

A drop in intensity and inability to change back to top gear.

There has been a lack of quality signings after a pair of exceptional seasons to reinforce the squad.

Firmino is not the same player any more, the midfield looks shaky and full-backs Trent Alexander-Arnold and Andrew Robertson have been a shadow of their former selves.

Naby Keita has been a bit of a flop and Thiago Alcantara, who appears to operate at a different pace to his team mates and the rest of the league, a total disaster. Injuries haven't helped, but claims by Liverpool fans that they would have been top of the league had everyone stayed fit are outlandish to say the least.

The whole team seems to have shifted a gear down. -- Zoran Milosavljevic, Sports Correspondent, Serbia

© Copyright 2021 Reuters Limited. All rights reserved. Republication or redistribution of Reuters content, including by framing or similar means, is expressly prohibited without the prior written consent of Reuters. Reuters shall not be liable for any errors or delays in the content, or for any actions taken in reliance thereon.
Related News: Liverpool, Juergen Klopp, Anfield, Reuters, Michael Edwards
SHARE THIS STORYCOMMENT
Print this article 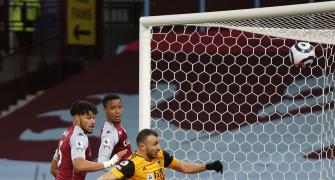 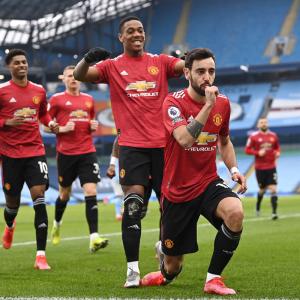 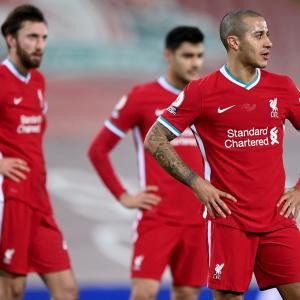