Who is the greatest among Federer, Nadal and Djokovic?

'All you can say at the moment is that Roger is leading the race - the race has not been finished. When they retire the race will be finished and you will be able to judge.' 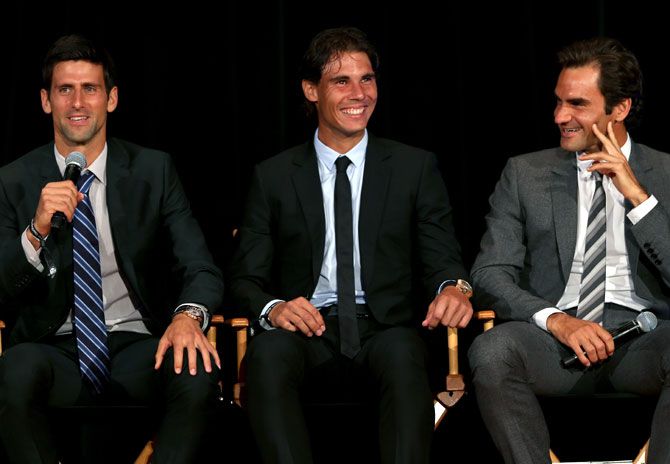 Eight-time Grand Slam winner Ivan Lendl said whoever ends up winning the most majors among the 'Big Three' of Roger Federer, Rafa Nadal and Novak Djokovic should be considered the greatest male tennis player of the Open era.

The "GOAT" (greatest of all time) debate in men's tennis has divided opinions for a decade and remains a hot topic as the trio continue to dominate the field, sharing the last 13 majors among them.

Federer, who will be 39 in August, leads the race with 20 Grand Slam singles titles, with Spaniard Nadal close on his heels with 19.

Reigning world No. 1 Djokovic is three behind the Swiss with 17 majors under his belt and is the youngest of the trio - at 32 he is a year younger than Nadal.

Pundits and fans have debated various factors for determining the greatness of a player: number of weeks at No. 1 ranking, overall tally of titles, Grand Slam count or head-to-head record.

"It's between Novak, Rafa and Roger on who ends up with the most majors and who is considered the best of all time in the Open-era," Lendl told Australia's Channel Nine television in an interview posted on Friday, adding that he considers Australian Rod Laver the best in the pre-Open era.

"All you can say at the moment is that Roger is leading the race - the race has not been finished. When they retire the race will be finished and you will be able to judge," he said. "The race is far from over.

"You have to go with Roger right now, but I'm not closing the book on that," Lendl added. As Djokovic and Nadal are younger and have longer to play, "that is going to be one hell of a race to follow."

Djokovic has often been asked his thoughts on the overwhelming support for Federer and Nadal from the crowd when he locks horns with them on the tennis court.

While the Serb says he does not feel antagonised by the lack of crowd support, Lendl said the affection of the public should not be a deciding factor.

"Who is the most popular is one thing but who is the greatest is not being judged by popularity," said the Czech-born Lendl, who has coached Andy Murray and Alexander Zverev in past.