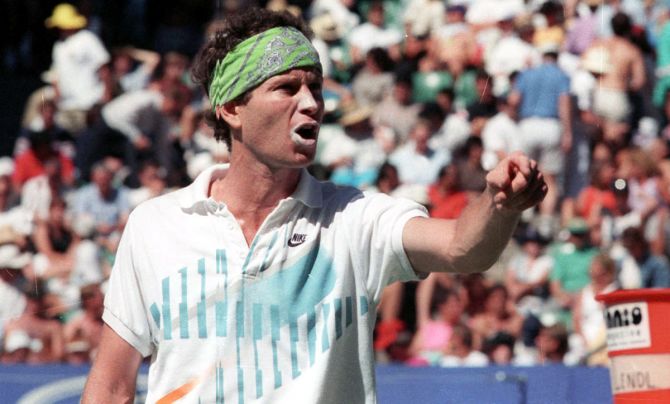 World number one Novak Djokovic was sensationally disqualified in the US Open fourth round on Sunday after striking a line judge with a ball following a point during the first set of his match against Spain's Pablo Carreno Busta.

Following is a list of players who have been defaulted from a tour-level match for on-field misconduct: Top seed Djokovic was defaulted from his fourth round match against Spain's Pablo Carreno Busta after striking a line judge with a ball following a point. 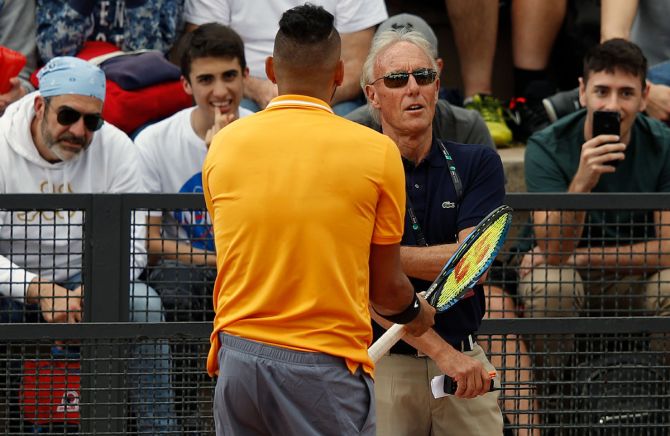 Kyrgios was disqualified from his second round match against Norway's Casper Ruud at the Foro Italico after the volatile Australian hurled a chair on to the court. Shapovalov was defaulted from a Davis Cup tie against Britain's Kyle Edmund after the Canadian inadvertently struck a ball into the umpire's face. 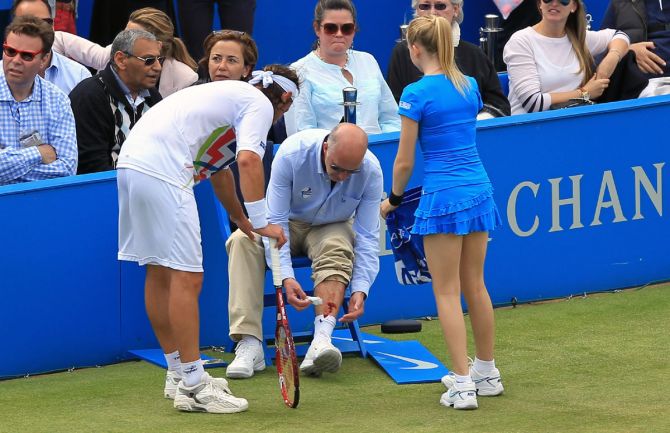 IMAGE: David Nalbandian tends to the line judge, who was injured after he kicked an advertising board into his shin. Photograph: Andre Ringuette/Getty Images for LTA

Nalbandian was disqualified from the Queens's Club Championships final in London after injuring a line judge by kicking an advertising board into his shin. IMAGE: Serena Williams argues a call by the line judge, leading to her disqualification for a conduct violation during the 2009 US Open semi-final against Kim Clijsters. Photograph: Jared Wickerham/Getty Images

Williams was defaulted on the final point of her US Open semi-final against Belgian Kim Clijsters following an argument with a line judge, who reported the American for verbal abuse.

Koubek was disqualified from his opening round match against Sebastien Grosjean in Metz after using abusive language to the tournament supervisor while disputing a call.

Rodionova was defaulted from her opening round match against German Angelique Kerber after the Russian-born Australian hit the ball at fans cheering for her opponent.

Spirlea became the first WTA player to be disqualified after directing abusive language at an official during her second round match against Stephanie De Ville in Palermo.

German qualifier Arriens was disqualified from the Paris Grand Slam during his opening round match against Brett Steven of New Zealand after hitting a line judge with his racket.

Tarango walked out on his third round match against German Alexander Mronz after a row with the umpire. 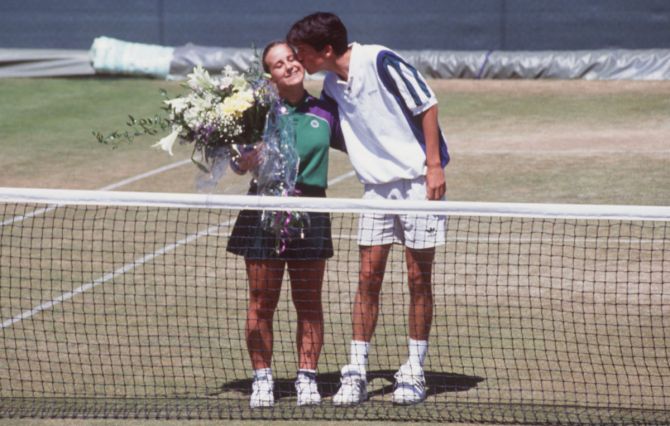 IMAGE: Tim Henman kisses ball girl Caroline Hall at a press photocall during the 1995 Wimbledon. Henman was disqualified after he accidentally fired a ball into the head of the ball girl. Photograph: Gary M. Prior/ALLSPORT/Getty Images

The British doubles pair of Jeremy Bates and Tim Henman became the first players to be disqualified from Wimbledon in the professional era after Henman accidentally fired a ball into the head of a ball girl following a point.

The American was disqualified from his fourth round match against Mikael Pernfors after being handed three code violations.

© Copyright 2022 Reuters Limited. All rights reserved. Republication or redistribution of Reuters content, including by framing or similar means, is expressly prohibited without the prior written consent of Reuters. Reuters shall not be liable for any errors or delays in the content, or for any actions taken in reliance thereon.
Related News: IMAGE, Tim Henman, Novak Djokovic, Denis Shapovalov, Reuters
COMMENT
Print this article