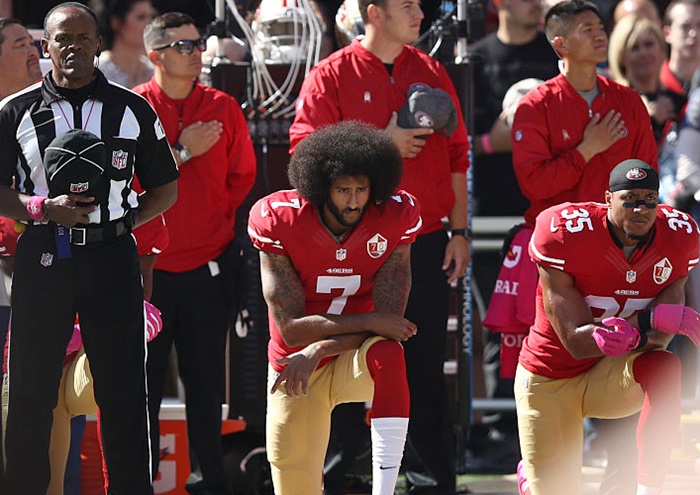 IMAGE: Eric Reid, right, and Colin Kaepernick, centre, of the San Francisco 49ers kneel in protest during the national anthem prior to their NFL game. Photograph: Ezra Shaw/Getty Images

President Donald Trump and the sports world engaged in an intensifying spat on Saturday after he called for National Football League owners to fire players who protest during the US national anthem and disinvited a National Basketball Association star from a White House visit.

Responding to Trump's attacks on football players who protested during the national anthem, NFL Commissioner Roger Goodell said on Saturday Trump's statements revealed "unfortunate lack of respect" for the NFL and its players.

Goodell's statement was released a day after Trump suggested any protesting football player was a "son of a bitch" and should lose his job.

"Wouldn't you love to see one of these NFL owners, when somebody disrespects our flag, to say, 'Get that son of a bitch off the field right now ... He is fired'," Trump said on Friday at a rally for Alabama Senate Republican candidate Luther Strange.

Trump said in Twitter messages later on Saturday that, if NFL players wanted "the privilege" of high salaries, they "should stand for the National Anthem. If not, YOU'RE FIRED. Find something else to do!"

Instead, Kaepernick put one knee to the ground to protest against police violence against African-Americans. Several players have since made similar gestures of protest before games. As commissioner, Goodell reports to NFL owners, some of whom have supported Trump in the past. New York Jets owner Woody Johnson, a major Trump presidential campaign donor, was confirmed by the Senate last month as Trump's pick to serve as US ambassador to Britain.

The union representing professional football players also rejected Trump's comments, saying it would defend their right to freedom of expression.

The White House could not be reached immediately to comment on the statements by Goodell or the union.

NBA players also struck back against comments by the president on Saturday.

In an early morning Twitter message on Saturday, the president rescinded a White House invitation to basketball star Stephen Curry, who had said he would "vote" against the planned visit by the NBA champion Golden State Warriors.

"Going to the White House is considered a great honor for a championship team. Stephen Curry is hesitating, therefore invitation is withdrawn!" Trump tweeted.

Curry told a news conference in Oakland, California: "It's beneath the leader of a country to go that route."

The Oakland-based Golden State Warriors said in a statement the team had intended to meet to discuss the potential visit at the first opportunity on Saturday morning.

"We accept that President Trump has made it clear that we are not invited," the team said.

"U bum @StephenCurry30 already said he ain’t going! So therefore ain’t no invite. Going to White House was a great honor until you showed up!" James, a prominent supporter of Hillary Clinton during the 2016 presidential elections, said on Twitter.

Singer Stevie Wonder appeared to evoke protests by Kaepernick and other athletes when he put one knee to the stage during a concert at the Global Citizen Festival in New York City on Saturday.

"Tonight, I'm taking a knee for America," Wonder told the audience as his son, Kwame Morris, helped him down.

Wonder then put his other leg down so that he was kneeling and facing the cheering crowd, with his son doing the same.

"Both knees in prayer for our planet, our future, our leaders of the world and our globe."

© Copyright 2020 Reuters Limited. All rights reserved. Republication or redistribution of Reuters content, including by framing or similar means, is expressly prohibited without the prior written consent of Reuters. Reuters shall not be liable for any errors or delays in the content, or for any actions taken in reliance thereon.
Related News: Donald Trump, Roger Goodell, Stephen Curry, NFL, NBA
SHARE THIS STORYCOMMENT
Print this article 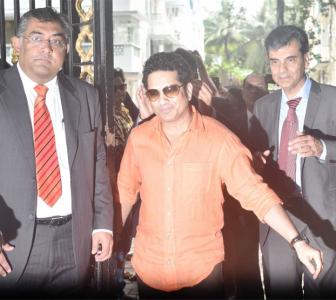 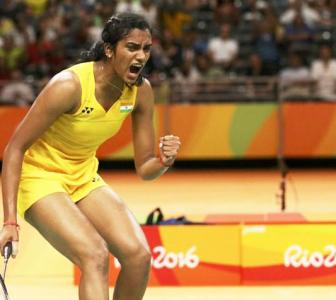 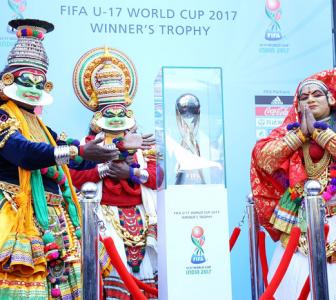 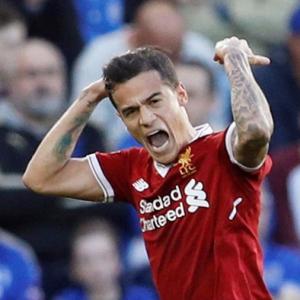 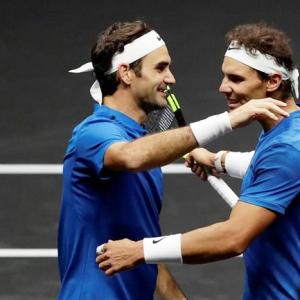