When Gatlin was second best again...

I did the best I could, says weary Gatlin 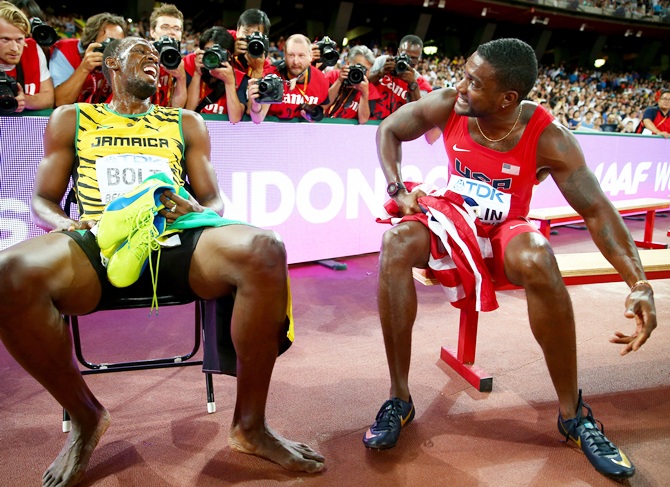 After two decisive defeats at the hands of Usain Bolt in the space of five days, Justin Gatlin is showing the strain. Widespread disdain within the sport for the American sprinter because of his two failed drug tests is also taking its toll.

Champ Usain Bolt knocked down by photographer on Segway scooter!

Gatlin came to the world championships as the fastest man in the world this year at 100 and 200 metres, seemingly poised to depose Bolt from his dominance of global sprinting, which the Jamaican has enjoyed for seven years.

But after coming within 0.01 second of the gold medal in the 100m final on Sunday, Gatlin seemed to be utterly crushed after Bolt comprehensively defeated him in Thursday's 200m final. 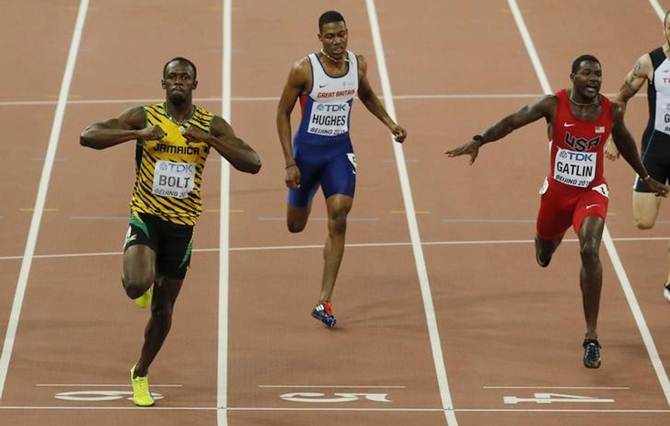 Jamaica’s Usain Bolt, left, celebrates after finishing ahead of Justin Gatlin of the United States, right, and Zharnel Hughes of Great Britain in the men's 200 metres final at the World Championships, in Beijing on Thursday. Photograph: Fabrizio Bensch /Reuters

Bolt won by two clear metres, beating his chest in triumph as he chested the tape in 19.55sec compared with Gatlin's 19.74. The American's only consolation seemed to be that, at 33, he was the oldest runner in the final.

"I feel tired," he told reporters. "Going through three 100s and three 200s in such a short amount of time, it is taxing on the body.

"I think that I just feel honoured to come out here and race for the country. My two other countrymen were not able to get on the podium or get to the semis or the finals, so I had to go out there with them on my shoulders and compete to the best of my abilities." Gatlin conceded that he struggled to match Bolt in the form he showed in the final.

"I went in there with my game plan. My coach said to me, 'Run the curve, come off the curve and attack coming off the curve and keep holding on'. "When you are known to be a front-runner and he is a front-runner, it is a weird feeling to have someone next to you or in front of you. You have just got to make sure you stay focussed on your race. I think I did the best I could." Gatlin said he had been running at his maximum - what he called the "red line" - through the 200m final, to the point that he was leaning forward before the finishing line.

"I ran a good curve. I ran as hard as I could. I held my form as long as I could. I am just tired from running so many rounds. It's been such a long season." Gatlin admitted feeling tension going into both this week's finals.

"I think a lot of people just wanted to see a great race," he said. "I'm the oldest man in the field and still running, running pretty well.

"It feels good to go against him. I'm just going to prepare myself for next year, for the Olympics, and come out even stronger." When asked whether his clapping after the race was applause for Bolt, Gatlin said: "I was clapping for such a good competition. I could have been Wallace Spearmon and not been on the track. I could have been Isiah Young and not been able to get to the finals.

"To be able to get out there and run, just not for myself but my country, I wanted to clap for the performance that I had to give today to get that medal."

Gatlin said he hoped to go on to win the 100m Diamond League series, which continues in Zurich next week.

It is unlikely, though, that he will be able to overcome a widespread antipathy felt among many in the sport over his drugs record. As a result Gatlin has refused to give interviews to the BBC because of what he considers to be bias against him. Earlier on Thursday Gatlin's agent, Renaldo Nehemiah, described some of the coverage of his client as 'vile ugliness'.

"Justin has been carrying the weight of all of this resentment for him," Nehemiah said in an interview with the British broadcaster.

Nehemiah criticised BBC commentators who were recorded in the press tribune celebrating after the 100m final, accusing them of being 'unprofessional'.

"That's not objective", Nehemiah said. But Michael Johnson, the American former world and Olympic sprint champion who works as a pundit for the BBC, dismissed the complaints. "Justin damaged the sport," Johnson said. "For people who love the sport, like myself, it's hard to forgive that."