West Ham United won the battle on Friday to inherit the London Olympic stadium after the 2012 Games, delighting everyone from international sports bosses to fans of defeated rival bidder Tottenham Hotspur.

The Olympic Park Legacy Company (OPLC) made a unanimous recommendation to back West Ham's plans over an audacious bid from Tottenham, who planned to remove the running track and knock down the 500 million pound ($800 million) stadium in favour of a purpose-built soccer ground on the site.

The authorities are keen to have a viable tenant to ensure that the stadium, centrepiece of the 9.3 billion pound Olympics, helps to regenerate the rundown area of east London, one of the poorest parts of the capital.

"We are confident that this represents the very best legacy for the Stadium," she said. 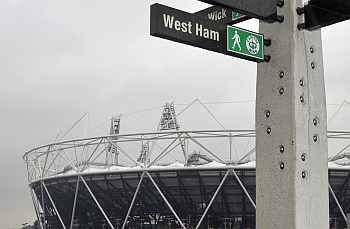 The OPLC decision, which must be rubber-stamped by London mayor Boris Johnson and the government, won endorsement from the International Olympic Committee (IOC) and honours a commitment to athletics made when London was awarded the Games in 2005.

"The IOC welcomes the Olympic Park Legacy Company's decision which allows Games preparations to continue and paves the way for a great sporting legacy," the IOC said in a brief statement.

"I have always said that Britain, whose history and legendary athletes have been an inspirational example, deserves a world class athletics venue. Now athletics can continue to thrive in the Olympic Park, long after the Olympic flame has gone out."

West Ham, who are bottom of the Premier League, will be making a short move from their current home at Upton Park.

Their plan would retain the athletics track inside the stadium, which would be reduced to a 60,000-seater in a £95 million project in partnership with the local council.

Karren Brady, vice chairman of West Ham, said: "We have been granted a once in a lifetime opportunity to grow our club. The nation has kept its promise and we will keep ours."

Tottenham, backed by American entertainment giant AEG, argued that West Ham's plan to incorporate an athletics track inside a soccer stadium would be unsustainable.

Tottenham manager Harry Redknapp, who played for and managed West Ham, said his old club would miss the atmosphere of Upton Park, a typical British ground where fans are close to the game.

"I wouldn't want to watch football sitting miles away from the pitch in a stadium that holds 60,000 people that is half full. That wouldn't appeal to me at all," he said.

Tottenham had planned to spend 300 million pounds on the stadium but their fans were unhappy about the prospect of uprooting from their home in White Hart Lane, north London.

Spurs fans campaigning against the move savoured a sweet defeat.

"It is probably the only time in my life I have or will celebrate a victory for West Ham," Tim Framp, a spokesman for the 'We are N17' group, told Reuters.

In its official statement, Tottenham said it wanted West Ham to be asked to make a legal commitment to maintain the running track at the stadium.

"We shall continue to monitor the bid process over the coming weeks up until its final determination, whilst reviewing our position and holding discussions with our advisors," Tottenham said.

The north London club had been reported to be considering a legal challenge to the decision.

Third division Leyton Orient, the closest club to the stadium, also fear that West Ham's plans to offer cut-price tickets to fill the stadium could damage their small fan base.

Sports minister Hugh Robertson said he "sincerely hoped" that Tottenham would not follow through on that legal threat.

"I think people say things in the heat of battle," he told reporters. "It's quite a big step for a club to take a government to judicial review."