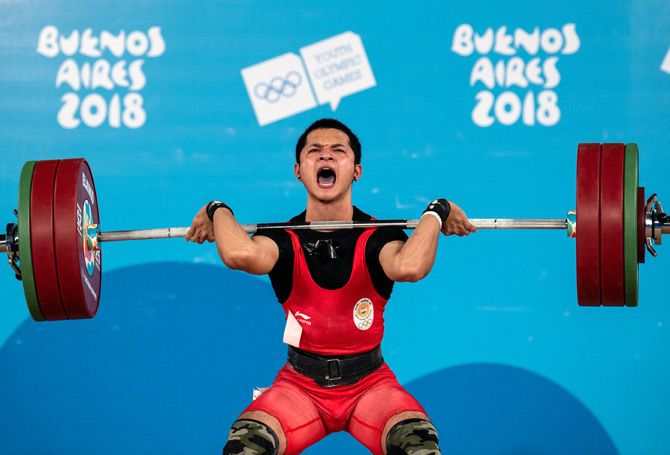 IMAGE: The Mizo weightlifter failed to lift 139 kg in his final attempt, which would have been his personal best and a new Youth World record. Photograph: Jonathan Nackstrand for OIS/IOC/Handout via Reuters

Three failed lifts cost Youth Olympics gold medallist Jeremy Lalrinnunga dear as he finished 10th in the easier group B competition at the World Weightlifting Championship, in Pattaya, on Friday.

Jeremy lifted 296kg (136kg+163kg) in the men's 67kg group B event. His final standing will be determined after the end of the group A proceedings.

The 16-year-old started with a lift of 132kgs in snatch. In his second try, he was successful in his attempt of lifting double his body, 136kg. But Jeremy failed to lift 139 kg in his final attempt, which would have been his personal best and a new Youth World record.

In clean and jerk, the Mizo weightlifter could only make one clean lift of 160kg. His second and third attempt of 165kg and 167kg respectively were unsuccessful.

Feng Lyudong of China claimed the top spot in the group with an effort of 333kg (153kg+ 180kg). Mexico's Jonathan Antonio Munoz Martinez and Deni of Indonesia came in second an third respectively.

Both men finished with a total lift of 312 kg but Munoz (142kg+170kg) was ranked higher than Deni (141kg+171kg) owing to a better snatch score according to the new International weightlifting Federation (IWF) rules.

Jeremy had been on record breaking spree while also improving on his personal best since the Asian Championships in China in April.

This was Jeremy's fourth international competition in 67kg after the IWF added this weight category last year for the Olympic Games and other events.

The World Championships is a gold level Olympic qualifying event, the points from which will be counted when the final rankings for Tokyo 2020 cut are done.

Jeremy had won a gold in the Buenos Aires Youth Olympics in October last year in 62kg category with a total lift of 274kg (124+150).

On Thursday, former champion Mirabai Chanu missed out on a podium, finishing a creditable fourth in the women's 49kg event.