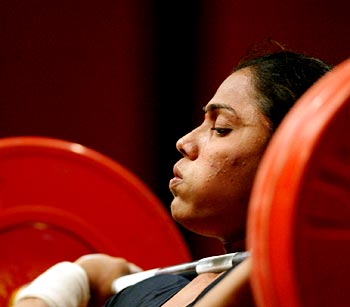 Dope-tainted lifter Shailaja Pujari, who is facing a life ban after flunking a National Anti-Doping Agency test recently, on Thursday pleaded her innocence.

Shailaja, who competes in 75-kg category, was found by the NADA positive for an anabolic steroid.

"I have not done anything wrong. I tested negative on August 28. But the experts know how long the anabolic steroids remain in the body. So, I am ready to give my samples again," Shailaja said here.

The lifter also said that she is yet to receive the report of the latest NADA test and planning to approach Union Sports Minister M S Gill as well as Indian Olympic Association president Suresh Kalmadi upon receiving the same.

"I was told that the report has been sent to me, but have not received that so far," she said.

She also accused the Indian Weightlifting Federation secretary B R Gulati of hatching conspiracy against her.

"I have been facing injustice since 2008. I was prevented from going to the 2008 Olympics (in Beijing). But another girl was accommodated in my place. It is all because of Gulati," she said.

The woman lifter had earlier failed a dope test in 2006.

Gulati had said earlier that Pujari, along with her male counterpart and Melbourne Commonwealth Games silver medallist Vicky Batta (56kg) have tested positive for banned substances.