We have incredible power: Rapinoe after winning FIFA Women's player

'We have a unique opportunity in football, different from any other sport in the world, to use this beautiful game to change this world forever' 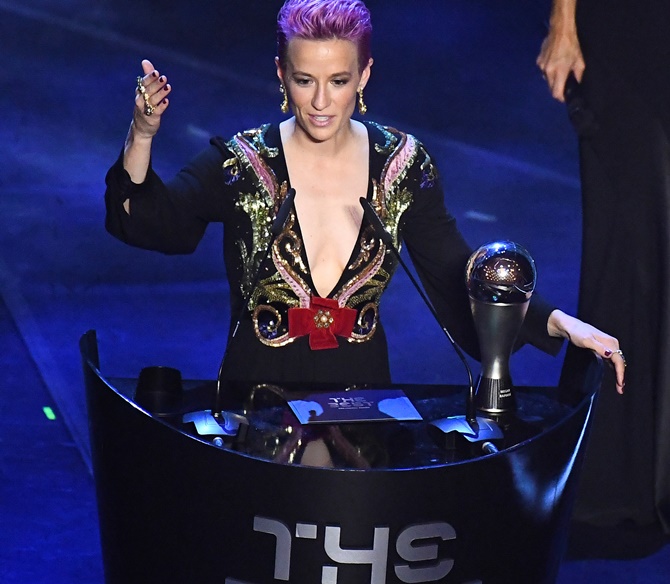 After winning the Best FIFA Women's Player of the year, USA's Megan Rapinoe gave a rousing speech on how football players should lend the platform to other people to lift them up.

"We have such an incredible opportunity being professional football players, so much success - financial and otherwise - we have incredible platforms. I ask everyone here to lend your platform to other people, lift them up and share your success," Goal.com quoted Rapinoe as saying.

"We have a unique opportunity in football, different from any other sport in the world, to use this beautiful game to change this world forever. I hope you take that to heart, do something, anything. We have incredible power in this room," she added.

After winning the women's individual award at the ceremony in Milan on Monday, Rapinoe used the platform to address some key issues that the game is dealing with.

The USA striker also revealed that she was inspired by Raheem Sterling and Kalidou Koulibaly after the pair stood up to incidents of racism.

She also talked about the homophobia and inequalities that still exist within football.

"Some of the stories that have inspired me the most this year: Raheem Sterling and Koulibaly, their incredible performances on the field but the way that they have taken on the disgusting racism that they have had to face this year, but probably throughout their whole lives," Rapinoe said.

Earlier this month, an Iranian woman, Sahar Khodayari, who was denied entry to the football stadium, passed away after setting herself on fire.

Women are not allowed to watch football matches in Iran after the 1979 Islamic Revolution however they can watch other sports like volleyball.

"The young Iranian woman who eventually set herself on fire because she was not able to go to the game, the one 'out' MLS player and the countless other 'out' LGBTQ female players who fight so hard not just to play the sport that they love but also to fight the rampant homophobia that we have," Rapinoe said.

"If everybody else was that outraged as the LGBTQ players if everybody was outraged by the equal pay, or lack thereof, or the lack of investment in the women's game, that would be the most inspiring thing to me. Those were all the stories that inspired me so much, but they also made me a little bit sad and a bit disappointed," she added.

Rapinoe won the Best Women's award for the first time in her career as she edged out other nominees Alex Morgan and Lucy Bronze.

Earlier this year, the USA's World Cup campaign was marked by controversies as Rapinoe had a public feud with the POTUS Donald Trump as shegave a statement that she fights for things, the Trump government does not fight for.