Neymar keeps Brazil ticking Neymar shrugged off some rough tackling and a missed penalty to score a brilliant solo goal as he led Brazil to a 3-0 win over Paraguay that moved them within sight of the 2018 World Cup finals on Tuesday.

It was Brazil's eighth consecutive win in qualifying and ensures they will finish the 10-nation group in at least fifth place, which would be enough for a playoff against a team from Oceania for a berth at the Russia finals.

Brazil lead the standings on 33 points with four matches to play, 11 points ahead of arch-rivals Argentina, who slipped back into fifth after a 2-0 defeat away to Bolivia without suspended captain Lionel Messi.

The top four teams qualify automatically. Paraguay are in seventh spot on 18 points.

The early part of the match was marked by a string of fouls on Neymar but the first big chance was a breakaway by Paraguay’s Derlis Gonzalez, who hurried his shot and put the ball wide.

Midfielder Hernan Perez missed another chance for Paraguay before Philippe Coutinho opened the scoring for the hosts in the 34th minute at the Corinthians Arena.

The Liverpool playmaker played a neat one-two with Paulinho before curling a low, left-foot shot past goalkeeper Anthony Silva and inside the far corner.

Neymar was awarded a penalty after being brought down early in the second half but his stop-start run-up failed to deceive Silva and the keeper saved with a dive to his right then blocked his effort with the rebound.

Stung by the miss, Neymar made up for it 10 minutes later, scampering down the left wing from inside his own half, skipping tackles and driving into the box before beating a wrong-footed Silva with a shot that took a deflection off a defender.

Neymar, who thought he had a second goal when he picked up a rebound off a team mate in an offside position and put the ball in the net, came in for some more heavy treatment from Paraguay, who hardly troubled Brazil goalkeeper Alisson in the second half.

Left back Marcelo put the icing on the cake with another fine goal in the closing minutes for Brazil, who extended their South American qualifying record with the victory. 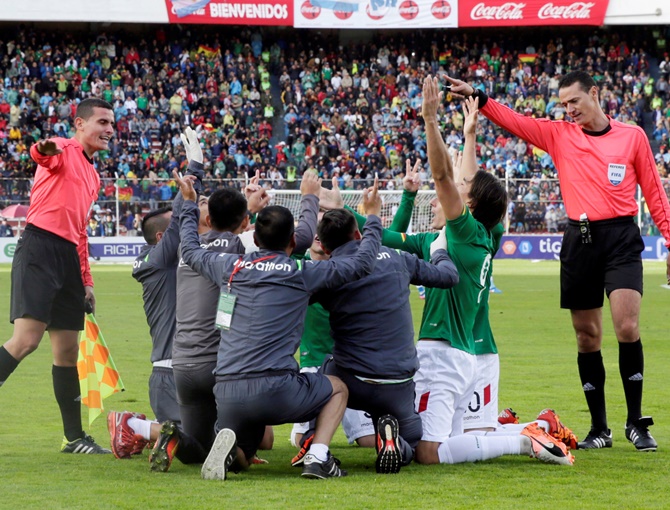 IMAGE: Bolivia's players celebrate at the end of the match.. Photograph: David Mercado/Reuters

Argentina, weakened by the last-minute suspension of Lionel Messi, had their chances of reaching next year's World Cup finals dealt a blow on Tuesday when they were beaten 2-0 by a spirited Bolivia side in La Paz.

Juan Arce and Marcelo Martins scored either side of halftime to give Bolivia a deserved victory over an Argentina side who defended poorly throughout an exciting end-to-end encounter.

The defeat in the high altitude of the Andean city, coupled with Colombia's 2-0 win away in Ecuador and Chile's 3-1 defeat of Venezuela, means the twice World Cup winners fall from third to fifth in the 10-team South American qualifying group.

The top four teams qualify automatically for Russia 2018 and the fifth-placed side goes into a playoff with a team from Oceania.

Argentina have 22 points, one fewer than Chile, two behind Colombia and eight in arrears to group leaders Brazil. Uruguay, who play Peru later on Tuesday, are also above them on 23 points.

Argentina were already without suspended regulars Javier Mascherano, Lucas Biglia and Gonzalo Higuain and their task was made even tougher when captain Messi was handed a four-match ban for swearing at a match official hours before the game started.

Bolivia appeared fired up by the decision and got the goal their early pressing deserved through Arce after 31 minutes.

The skinny winger outmuscled Facundo Roncaglia on the penalty spot to head home a deep cross from Pablo Escobar on the right.

Roncaglia was at fault again for the second goal seven minutes into the second half.

The Celta Vigo defender failed to prevent Jorge Flores from escaping to the byline to cross for an unmarked Marcelo Martins.

The big striker had all the time in the world to steady himself and hammer the ball past helpless Argentina goalkeeper Sergio Romero.

Argentina came into the game more when Sergio Aguero replaced Angel Correa 10 minutes into the second half but they could not get a goal.

"We tried to wrestle control of the game from Bolivia (and) the team improved a bit in the second half," said Argentine coach Edgardo Bauza.

"Bolivia won fair and square," he added. "We need to think ahead. We are still alive and we want to qualify for the World Cup."

"We know that this is going to be a battle and we are going to keep fighting." 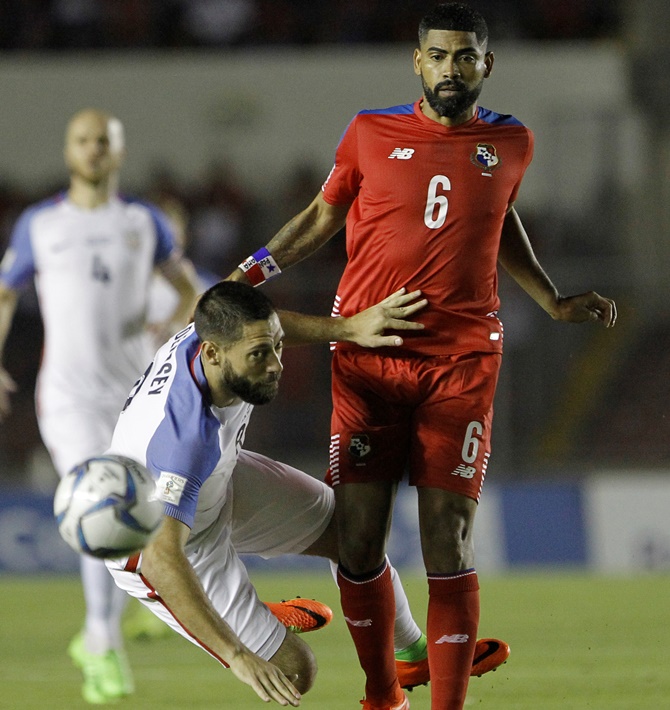 IMAGE: Gabriel Gomez of Panama and Clint Dempsey of the US in action. Photograph: Juan Carlos Ulate/Reuters

The United States remain in contention for a spot at next year's World Cup after Bruce Arena's side battled to a scrappy 1-1 away draw against Panama in CONCACAF qualifying.

A loss would have left the US anchored equal bottom in the six-team group known as the Hexagonal, but the draw sends them home relieved and still in contention for one of the three automatic spots to Russia 2018.

Mexico extended their lead to three points atop the group with a 1-0 away win over Trinidad and Tobago, a second-half goal by Diego Reyes in Port of Spain lifting El Tri to 10 points from four games.

Costa Rica are second on seven points after a 1-1 away draw at Honduras, followed by Panama on five points, the US and the Hondurans on four, while Trinidad have three points.

In Panama City, teenager Christian Pulisic set up striker Clint Dempsey for his 56th international goal as the US took the lead in the 39th minute.

But Panama were on equal terms four minutes later when the American defence failed to deal with a long throw-in, the ball bobbling to Gabriel Gomez, who fired home from close range.

After the match, US goalkeeper Tim Howard considered the result as one point gained rather than two points lost.

"We didn't tie the game, we won a dogfight," he said in a pitch-side interview. "It's tough away from home in qualifying. We had to get a point."

As for the physical nature of the contest, Howard did not mince his words.

"If you watch the game you would shake your head. It's what we've come to expect away from home with all the elements. We're always swimming upstream away from home.

"They're a physical team. This is probably the most athletic team in CONCACAF so it's hard to match them but I thought we did a good job."

Arena, who took over after the Americans lost the first two games of their qualifying campaign under Jurgen Klinsmann, was happy with the result, if not the officiating.

"The referee didn't blow his whistle too much," he said wryly, while conceding Mexico were now likely to win the group.

Mexico rode their luck against Trinidad, who felt aggrieved after a slick first half effort by Joevin Jones was disallowed for offside, though replays appeared to show he had timed his run to perfection.

The visitors had the better of the second half, with Hector Herrera hitting the post with a curling 20-yard shot, before defender Reyes powered home a header from a corner in the 58th minute.

"We knew it would be difficult... but in the second half we found the spaces and I think we deserved the victory in the end," defender Hector Moreno said.

In San Pedro Sula, Honduras bounced back from a 6-0 drubbing against the U.S. last week by sharing the spoils with Costa Rica.

Anthony Lozano bundled the ball home to give Honduras a first-half lead, before Costa Rica equalised in the second half with a Kendall Watson header.

© Copyright 2022 Reuters Limited. All rights reserved. Republication or redistribution of Reuters content, including by framing or similar means, is expressly prohibited without the prior written consent of Reuters. Reuters shall not be liable for any errors or delays in the content, or for any actions taken in reliance thereon.
Related News: Bolivia, Argentina, Marcelo Martins, Lionel Messi, Facundo Roncaglia
COMMENT
Print this article