Tamil Nadu finished third at the 63rd Rangaswami Cup Senior National Men's Hockey Championship after edging past Chandigarh 3-2 in the play-off match, which also saw Olympian Adam Sinclair being banned for the next edition of the tournament.

The match began after a scuffle between the Tamil Nadu players, led by Sinclair, and some of the officials and the groundsmen over a minor issue, on Saturday.

The officials asked the players to change the dug-out but they refused following which heated exchange took place and Tamil Nadu players attacked the officials and groundsmen, tournament officials alleged.

The fracas delayed the start of the match by 30-minutes and the tournament director Peter Menezes banned TN skipper Sinclair from the next edition, holding him responsible for the violence.

A report will be sent to Indian Hockey Federation (IHF) about the incident, they said.

For Tamil Nadu, V Nair scored a brilliant field goal in the sixth minute and gave 1-0 lead to his team but Harmanpreet Singh of Chandigarh equalised 10 minutes later.

Tamil Nadu intensified their attack and scored twice in seven minutes with R Ashok converting a penalty corner in the 27th minute and Satyarajan netting the ball in the 34th minute.

Raman Deep Singh of Chandigarh struck a field goal in the 67th minute to reduce the margin to 3-2. 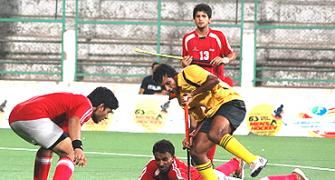