Ace discus thrower Vikas Gowda clinched the first gold for India as the home team won three medals on the second day to make their presence felt in the 20th Asian Athletics Championships, in Pune on Thursday.

Gowda, who turns 30 on Friday, threw a creditable 64.90m in his fourth attempt to win his first gold of the Asian Championships in his fifth appearances. He had won a silver each in the 2005 and 2011 editions.

With this win, Gowda has booked a berth for next month's World Championships in Moscow as each of the winner in the ongoing Asian meet automatically qualifies for the global mega event.

After two days, China leads the medal tally with five gold medals, two silvers and one bronze while India are in fourth position. Bahrain and Saudi Arabia are second and third respectively with two golds each. 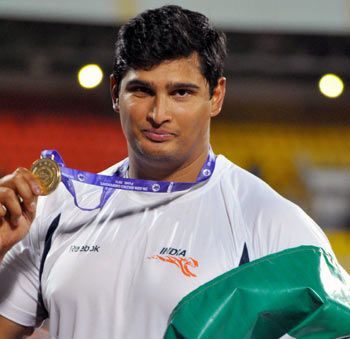 Unlike on Wednesday, there was no rain and spurred by the cheering sizable crowd at the Shiv Chhatrapati Stadium at Balewadi, the US-based Gowda bought his win in a remarkable fashion after trailing to silver winner Mohammad Samimi of Iran (61.93m) till the third round.

Gowda then changed shoes as his feet slipped in the second attempt in which he threw the disc into the side net before coming up with his winning throw in the fourth attempt, much to the wild celebration of the crowd which listened to the Indian national anthem being played for the first time in the Championships.

India had hopes of winning gold in the women's 400m but Poovamma, running on a big stage for the first time, finished second in 53.37 seconds. China's Zhao Yanmin won the gold in 52.49 seconds while Taslakian Gretta of Lebanon got the bronze in 53.43 secs.

Another Indian Anu Mariam Jose was fourth in 53.49secs.

Poovamma, who ran below her personal best of 52.75secs, later expressed satisfaction with her performance.

"I am not going to try to qualify for the World Championships next month. I am not disappointed," she added.

In the men's 400m, Kunhi Mohammed and Rajiv Arokia came fifth and sixth respectively with timings of 46.61secs and 46.63secs in the event won by Yousef Ahmed Masrahi of Saudi Arabia in 46.35secs.

China took their second gold of the day with their defending champion Su Bingtian clinching the 100m dash in 10.17secs to become the fastest athlete of the championships.

Bingtian beat Qatari Samuel Adelebari Francis (10.27secs), the only sprinter from Asia to have run sub-10 seconds, to the second place. Barakat Al Harthi of Oman was
third in 10.30secs.

Wei Yongli made it a memorable day for China by taking the women's sprint title in 11.29 secs. Chisato Fukushima of Japan (11.53) and Tao Yujia of China (11.63) won the silver and bronze respectively.

It was the fourth time that China made that 'unique double' of winning the gold medals in 100m in both men's and women's categories in same championships.

National record-holder Sahana Kumari disappointed the Indian supporters with a fourth place finish in high jump. She could manage to clear only 1.86m, as against her personal best of 1.92m.