'Calling me kid @boxervijender. I'm the only Indian boxer who has defeated a world champion in his own country.' 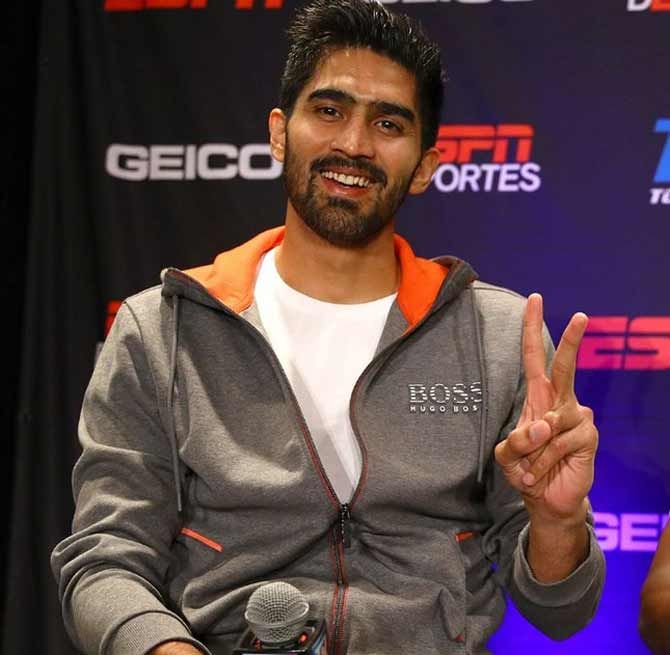 IMAGE: Vijender Singh recently got the better of Mike Snider on his debut in the US professional circuit for his 11th consecutive victory in pro boxing. Photograph: Vijender Singh/Twitter

Vijender on Thursday had called on boxing legend Amir Khan to stop fighting with "kids" and take him on after the Pakistan-origin British boxer had expressed a desire to lock horns with the Olympic bronze-medallist, claiming that the star Indian boxer is scared of him.

Khan was scheduled to clash with Neeraj at the WBC Pearl World Championship, but a month before the bout the Indian was hospitalised following a car accident.

Vijender's comments did not sit well with Neeraj, who took to Twitter on Saturday to show his annoyance and in turn challenge the Haryana boxer.

"Calling me kid @boxervijender. I'm the only Indian boxer who has defeated a world champion in his own country #canxu #china. I want you to face @officialvkyadav (Vikas Krishan) and me and @amirkingkhan undercard in november this year. Are you ready?"

Vijender, fresh from his 11th straight win in the professional circuit, had said: "I am ready to fight with Amir. He picked a junior boxer to fight. Neeraj Goyat is way junior to me. I had said before and I am saying it again I am ready to fight whenever he tells me to. He should stop fighting kids."