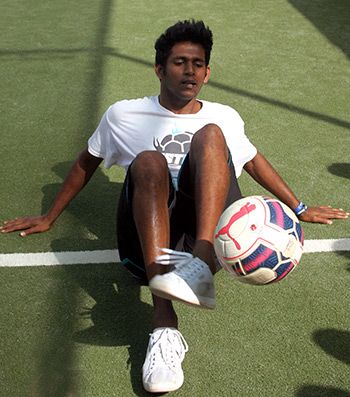 Archis Patil was forced to abandon professional football after injuries, but his passion for the sport found other outlets, discovers Hitesh Harisinghani/Rediff.com

If he seems familiar, it's probably because you have spotted him in television shows like MTV Roadies or Indi's Got Talent.

He is also the holder of the Guinness World Record for most shoulder spins by an Indian and the Limca Book Of World Records for the most amount of consecutive side head stalls, both in 60 seconds.

Archis was forced to abandon professional football after injuries, but his passion for the sport found other outlets. After watching freestyle football in Sweden, he became a convert.

"Freestyle football is more artistic where you can express yourself with the ball. It has no rules and regulations and you can use any part of your body. Basically, it's a solo sport where an individual's creativity is seen in the way one thinks, the way one moves."

It is, of course, not easy. But, says Archis, there are advantages.

"It is an individual sport and your hard work is easily seen. It's very challenging and there are no limitations to what you can do. Day by day, with practice, you keep getting better."

The Mumbai lad plans to popularise the sport in his city. He is teaching football at Juhu, north-west Mumbai, and says he will soon introduce freestyle football there. "I plan to open my own academy and talks with collaborators are in progress."

He also competes internationally. "I will also be representing India again this year at the Super Ball, which is the world's biggest football freestyle championship. I am also going to participate in the Asian freestyle competition in Jakarta."

And that, he smiles, is another perk. That he gets to travel across the world.

Please click on the video below to watch Archis in action.