'I don't blame any individual, it is the weakness of the system' 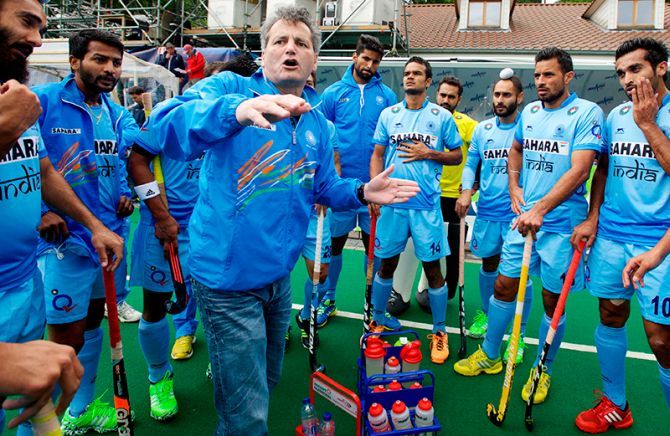 The special committee's recommendation to discontinue his services as India's hockey coach did not come as a surprise to Paul van Ass.

When contacted, after a nine-member committee, headed by Harbinder Singh, recommended on Friday that he should be shown the door, Van Ass, who had claimed that he was fired following an altercation with Narinder Batra, rued the weakness of the Indian system and demanded an apology from Hockey India’s president for tarnishing his reputation.

"I knew the decision already. I am not surprised. He (Batra) was just finding ways to fire me and he did it. He should apologise for it (tarnishing my reputation)," said Van Ass from his home in Rotterdam.

"No one from the Sports Authority of India has tried to contact me. I don't blame any individual, it is the weakness of the system," he added.

As per procedure, it is now for Hockey India to make a formal announcement about Van Ass's future with Indian hockey.

The Dutchman had taken over as coach from Terry Walsh, incidentally also sacked after a spat with Batra, just five months ago.

The development leaves India without a coach with barely a year to go for the Rio Olympics for which the team has already qualified by virtue of winning the gold medal at last year's Asian Games.

The committee's decision also puts an end to days of uncertainty over the future of Van Ass, who had gone on record to say that he is willing to come back as coach provided there is no interference.

While recommending his removal, the special committee noted that the Van Ass did not even bother to submit his report on India's performance in the World League Semi-finals in Antwerp.

But Van Ass argued that he was not bound to submit the report as he was already told about his ouster as India coach.

"That's not my problem. They (Hockey India) are now questioning me, but they should be honest about the fact that they fired me just one week after the tournament.

"I want to make it clear that I wasn't required to submit the report, I wasn't in India because Batra fired me on July 10 and on July 13 I got a mail from Roelant (Oltmans) confirming my sacking," he said.

Asked whether he was disappointed with compatriot Oltmans for not backing him in the episode, Van Ass replied: "He will support me. Just wait for the right time."

Van Ass is the fourth foreign coach to be shown the door unceremoniously ever since Hockey India took over the reins of the game in 2009.

His predecessors Jose Brasa, Michael Nobbs and Terry Walsh -- all of whom were hired by the Sports Authority of India on the recommendations of Hockey India on hefty salaries – also left the country on an unceremonious note.