News
Business
Movies
Sports
Cricket
Get Ahead
Money Tips
Shopping
Sign in  |  Create a Rediffmail account
Rediff.com  » Sports » US wrestler in Mexico channels hatred of Trump in the ring

US wrestler in Mexico channels hatred of Trump in the ring

The anger is all in the fun of the sport of "lucha libre," which pits rule-breaking bad guys, or "rudos," against noble "tecnicos," he said. After the match, fans line up to get photos with the blond wrestler and have him sign autographs for their kids. 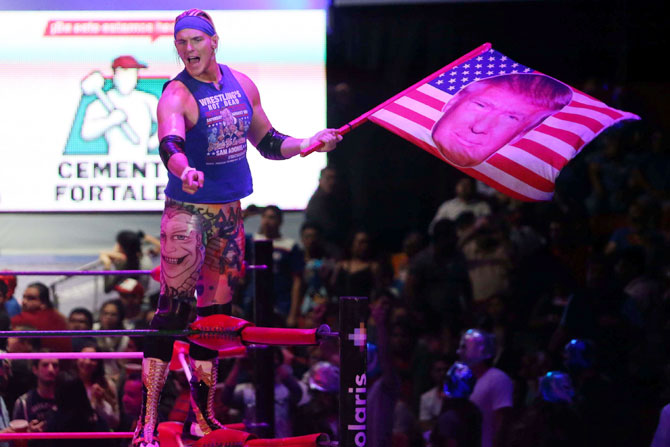 IMAGE: US wrestler Sam Adonis, 27, role-playing as a fan of US President Donald Trump, waves a flag with Trump's face during a wrestling fight at the Coliseo Arena in Mexico City, Mexico, on Sunday. Picture taken, February 12, 2017. Photograph: Edgard Garrido/Reuters

An American wrestler working in Mexico is tapping into anger at Donald Trump, whipping crowds into a frenzy with an act as a supporter of the locally loathed US president.

Sam Polinsky, known as Sam Adonis, climbs into the ring of Mexico City's main wresting stadium waving an American flag that has Trump's face emblazoned over the red, white and blue.

The anger is all in the fun of the sport of "lucha libre," which pits rule-breaking bad guys, or "rudos," against noble "tecnicos," he said. After the match, fans line up to get photos with the blond wrestler and have him sign autographs for their kids.

"Fans in Mexican lucha libre are some of the best on earth. Two thousand people in Mexico can make more noise than 20,000 people in the United States," Polinsky said.

Lucha libre, Spanish for "free fighting," is a form of wrestling that is often considered Mexico's second most popular sport, trailing only soccer.

Polinsky previously worked in Europe and the United States, but he took his career to a new level after he moved to Mexico last April just as Trump was rising in the Republican primaries.

He tweaked his initial act as a ladies man by adding his Trump flag and recasting himself as a typical US Trump supporter.

"I can't say I support Trump but I definitely respect Trump," he said.

Three weeks into his administration, Trump has vowed to move ahead with construction of a wall on the US-Mexico border, repeatedly insisting that Mexico would pay for it, while also saying he will deport millions of unauthorised immigrants.

Mexican President Enrique Pena Nieto has repeatedly said that Mexico will not pay for a border wall, and he cancelled a visit to the United States over the issue.

Thousands of protesters in more than a dozen Mexican cities took to the streets on Sunday to express their opposition to Trump and criticise Pena Nieto as a weak leader who has presided over rampant corruption and violence at home.

© Copyright 2020 Reuters Limited. All rights reserved. Republication or redistribution of Reuters content, including by framing or similar means, is expressly prohibited without the prior written consent of Reuters. Reuters shall not be liable for any errors or delays in the content, or for any actions taken in reliance thereon.
Related News: Donald Trump, US Trump, Mexico City, Sam Polinsky, Enrique Pena Nieto
SHARE THIS STORYCOMMENT
Print this article