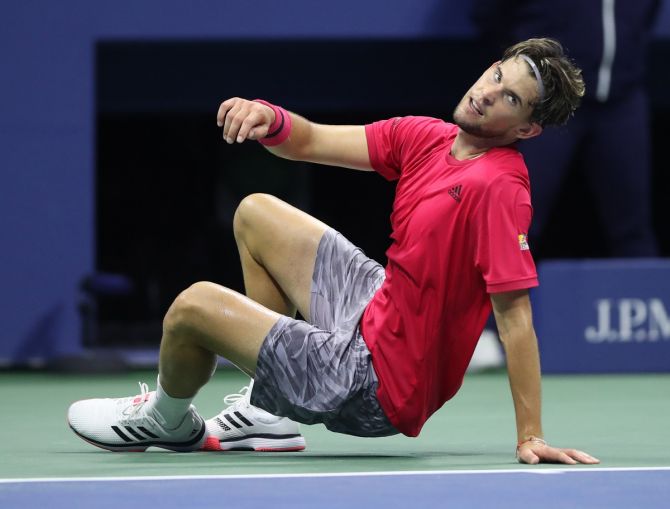 IMAGE: Austria’s Dominic Thiem gets up after falling in the third set during his semifinal match against Daniil Medvedev of Russia. Photograph: Matthew Stockman/Getty Images

Thiem seized the early momentum inside Arthur Ashe Stadium, handily carrying the first set without dropping a single first-serve point, but a double fault and a forehand error saw him hand Medvedev the break and the early lead in the second.

The Australian Open runner-up spent the remainder of the frame playing catch up, converting on a critical break to level the score 5-5 before the 24-year-old Russian dragged it into a tiebreak.

The 27-year-old Austrian, who had a trainer examine his ankle before the third set, slipped and fell twice in the match, unfurling a string of frustrated exclamations in the second incident, but regained his cool to survive yet another tiebreak to clinch the affair with a power forehand and a roar.

“I played my best tennis then towards the end of the sets,” said Thiem, who is gunning for a maiden Grand Slam title. “Both tiebreaks were amazing. Tiebreaks are mentally a tough thing. I don’t like them at all to be honest."

“I’m really happy to be through. It was a great semi-final,” he added.

Thiem will take on Germany’s Alexander Zverev in Sunday’s US Open final. 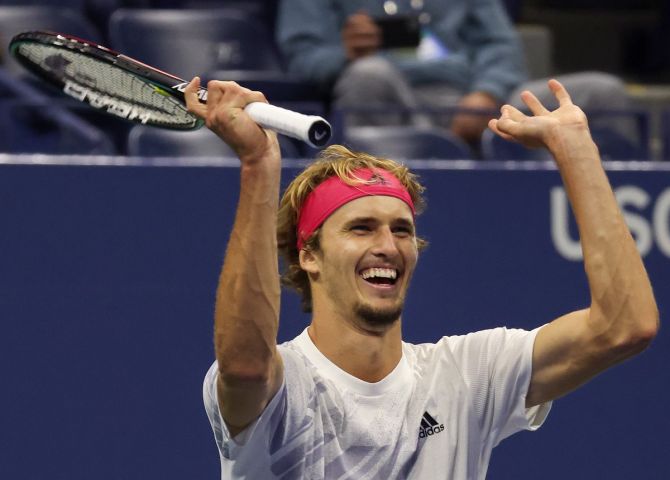 Zverev, with his back against the wall, raised his game just in time to deny the Spanish 20th seed the upset and, in doing so, secured his first career victory from two sets down on his second match point after a rogue backhand by Carreno Busta.

The German looked headed for certain defeat after committing 36 errors through the first two sets but used his versatile game to pick himself up and looked like a completely different player the rest of the way. 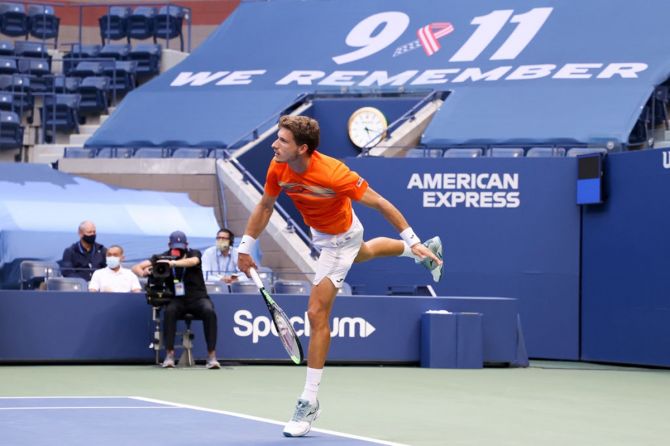 After Zverev levelled the match at two sets apiece Carreno Busta took a medical timeout to have his back tended to and the German, with a sudden swagger in his step, got the break he needed in the first game before cruising home.

Carreno Busta was locked in early as he held at love to open the match, turned aside a break point on his next service game, and broke twice for a 5-1 lead before securing the first set.

Things kept going the Spaniard’s way in the second as he pushed Zverev’s back to the wall with three consecutive breaks for a 5-0 lead during a lopsided set in which the mishitting German made 22 unforced errors.

But Zverev flipped a switch and suddenly looked the more confident of the two as he broke Carreno Busta four times over the next two sets while leaning on his serve to put the pressure on the Spaniard’s shoulders.

Zverev, who is bidding to become the first German Grand Slam champion since Boris Becker won the 1996 Australian Open, will face either 2019 US Open finalist Daniil Medvedev or second seed Dominic Thiem in Sunday’s final.