Fourth seed Alexander Zverev had his bid for a maiden grand slam title come to a crushing end on Wednesday when Borna Coric rallied for a 3-6, 7-5, 7-6(1), 7-6(4) victory in the second round of the US Open.

The two 20-year-olds may be part of tennis's next generation but the German and Croat have gone toe-to-toe on court since they were youngsters.

The clash was not even the first time the two have met at Flushing Meadows with Coric beating Zverev in the US Open junior boys semi-finals on the way to winning the title in 2013.

Zverev, winner of five titles this season including in the warmup tournament in Montreal where he defeated Roger Federer in the final, looked poised to settle the score when he grabbed the opening set.

But the 61st-ranked Coric battled back to win three close sets, the last two in tie-breaks, to leave the German swinging his racquet in frustration. Thiem, who was two sets and a game up in the third before play was halted on Tuesday, won 6-4, 6-1, 6-1 and will face American wildcard Taylor Fritz in the second round.

Dolgopolov,  will face 15th-seed Tomas Berdych in the second round on Thursday. IMAGE: Maria Sharapova in action against Timea Babos in their second round match. Photograph: Mike Segar/Reuters

Maria Sharapova extended her grand slam comeback when the former world number one defeated Hungary's Timea Babos 6-7(4), 6-4, 6-1 on Wednesday to advance to the US Open third round.

The Russian did not have the same inspiration that helped her beat world number two Simona Halep in the opening round.

Sharapova made too many unforced errors in a scrappy first set that featured six breaks of serve.

Once she found her groove midway through the second set, however, the 30-year-old, sporting a pale peach pink crystal-encrusted dress, eventually shone like a diamond, tossing Babos aside in a one-sided decider.

The Hungarian bowed out on the second match point when she sailed a backhand long, triggering a huge roar on Arthur Ashe Stadium.

The Russian has a clear path to the semi-finals, where she could meet tournament favourite Garbine Muguruza of Spain.

Sharapova got off to a shaky start as Babos, who mixed her game perfectly with serves to the body and sliced forehands, opened a 2-0 lead. The Russian eventually forced a tiebreak but made a mess of a couple of forehands to hand Babos a deserved lead.

Sharapova became more vocal as she saved break points in a sixth game that proved to be the turning point of the match.

The 2006 US Open champion broke in the following game and held to clinch the second set as Babos sensed her chance was gone.

Sharapova then broke twice in the decider to move 4-1 ahead and ensure her third round place was a formality.

Although the two wins have boosted her confidence, she was not complacent as she prepares for her next match against American Sofia Kenin.

"I certainly have expectations just because I know I've been in these stages before and I've been able to execute," she said.

"There's a certain level of I know I can do this, I've done it before. I want to have that feeling again.

"But there's also the realistic understanding of 'okay, you haven't been in this situation for a while. It's going to take a little time'."

Venus Williams cruises into third round Seven-time Grand Slam champion Venus Williams showcased a remarkable performance as she knocked out big-hitting Frenchwoman Oceane Dodin in straight sets to storm into the third round of the US Open on Wednesday.

The American tennis star, who needed three sets to get past Grand Slam debutante Viktoria Kuzmova, was much sharper against Dodin as she eased past her in a one-sided second round clash 7-5, 6-4 that lasted one hour and 28 minutes under the lights of Arthur Ashe Stadium.

Although Dodin made late pushes after falling behind 2-5 in each stage at one point of time, Williams proved too experienced as she struck 32 winners to just 14 unforced errors against the 20-year-old's 20 winners and 27 errors to come out victorious.

Venus will now cross swords with Greek star Maria Sakkari for a place in the fourth round.

The 37-year-old is bidding to clinch her third US Open crown after reaching the Wimbledon and Australian Open finals this year.

Venus, who has not won the title at Flushing Meadows since 2001, had earlier made it to her first Grand Slam final since 2009 when she slumped to a defeat at the hands of Garbine Muguruza at Wimbledon earlier this year.

A victory in the finals of the third major of the season would have made the American the oldest female Grand Slam champion in the Open era, and could see her return to top of the world rankings for the first time since July 2002.

Injured Kyrgios dumped out in first round Nick Kyrgios could not shake off a shoulder pain or cope with his frustration as he slumped to a 6-3, 1-6, 6-4, 6-1 defeat by fellow Australian John Millman in the US Open first round on Wednesday.

The 14th seed had treatment at the beginning of the third set after levelling at 1-1, but the mercurial Kyrgios gradually appeared to lose interest in the match.

The 22-year-old received a warning for allegedly cursing and broke his racket as he produced a string of unforced errors at Louis Armstrong Stadium.

Murguruza relieved to advance to third round Wimbledon champion Garbine Muguruza reached the US Open third round for the first time by beating China's 92nd-ranked Duan Ying-Ying 6-4, 6-0.

"I had like a curse and I broke it finally. I'm so happy," Muguruza said.

"I just put the heart on the court. I knew I had to be all the time fighting for the ball and in the end I won."

Beating Slovakian 31st seed Magdalena Rybarikova to reach the last 16 would make the Spanish third seed the leader in a seven-woman fight for world number one. 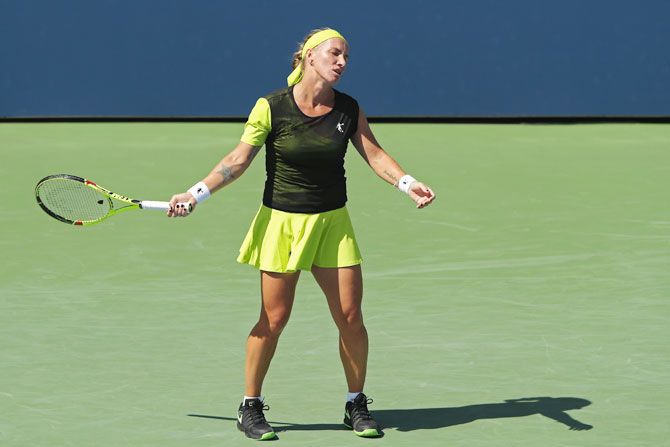 Poland's Agnieszka Radwanska, seeded 10th, secured a place in the second round with a 6-4 7-6(3) win over Croatian Petra Matic.

Fourth seed Svitolina lost a second-set tiebreak against unseeded Czech Katerina Siniakova after their match resumed with the Ukrainian having won the first set.

American CoCo Vandeweghe came back from a set down to claim a 2-6 6-3 6-4 first-round victory over compatriot Alison Riske.

Eugenie Bouchard was back on centre court at the US Open on Wednesday, the United States Tennis Association saying it held no grudges against the Canadian who is suing the organisation for negligence over injuries suffered in a locker-room fall.

Usually the marquee matchups of the day are reserved for Arthur Ashe Stadium and a contest between two players barely ranked inside the top 100 seemed an unconventional choice -- even more so given the lawsuit now before the courts.

"I was surprised," admitted the 76th-ranked Bouchard following a 7-6(2), 6-1 thrashing by 89th-ranked Russian Evgeniya Rodina.

"But it's always an amazing opportunity to play on the biggest tennis court in the world." Cincinnati winner Dimitrov is one of the favourites for the title this fortnight but has failed to progress past the fourth round in six previous appearances at Flushing Meadows.

Monfils, a semi-finalist last year, will meet American Donald Young in the next round.

Del Potro, the 2009 winner, will meet Spaniard Adrian Menendez-Maceiras in the second round. "It's a dream come true for me," Shapovalov said.

Shapovalov became the youngest man in the third round of a Grand Slam since Bernard Tomic at the 2011 Australian Open and at the US Open since American Donald Young in 2007. Ekaterina Makarova sent Denmark’s Caroline Wozniacki packing with a 6-2, 6-7(5), 6-1 victory in two hours and 20 minutes at the US Open.

5th seed Wozniacki surprisingly lost to 40th-ranked Makarova in the second round.

Four of the top seven women are out of the field just three days into the two-week tournament. Kristina Mladenovic was tipped as a French Open favourite three months ago but after a fall at Wimbledon the Frenchwoman has experienced a painful form slump that resulted in a first-round exit at the US Open.

Mladenovic, who reached the quarter-finals in Paris on the back of an impressive claycourt campaign, suffered a knee injury at the All England Club.

Things went from bad to worse for the hard-hitting Mladenovic, who appeared toothless in three consecutive first-round defeats at U.S. Open warm-up tournaments.

"There are highs and lows in a season. I had a complicated Wimbledon where I pulled a ligament in my right knee," said 14th seed Mladenovic, who lost 6-3, 6-2 to Romanian Monica Nicolescu on Wednesday.

"I needed a rest after that fall but then it was not easy to come back to form for the American tournaments. Mladenovic, who showed signs of frustration on court, refused to blame her fall.

"Physically, I'm in good shape, but it was not enough. I would have needed a round or two to get things started again."

Mladenovic is confident she will soon get back to her best level as she has shaken off her injury and she will not change her schedule.

"I was really bad in the previous weeks, sometimes I was not comfortable on court. Even if it was not enough today, I have been better," she said.

© Copyright 2022 Reuters Limited. All rights reserved. Republication or redistribution of Reuters content, including by framing or similar means, is expressly prohibited without the prior written consent of Reuters. Reuters shall not be liable for any errors or delays in the content, or for any actions taken in reliance thereon.
Related News: Nick Kyrgios, Kristina Mladenovic, IMAGE, John Millman, All England Club
COMMENT
Print this article 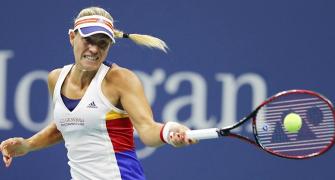 Kerber states, it's tougher to stay on top 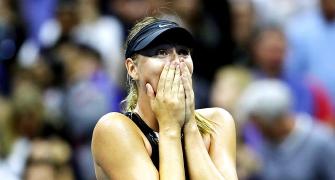 Sharapova returns to the US Open spotlight US Open PIX: Federer stretched by teen Tiafoe before advancing 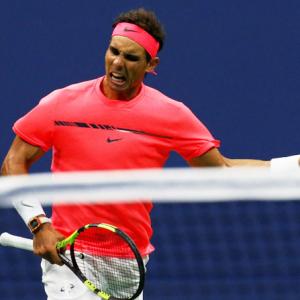