India's Leander Paes and his Czech partner Radek Stepanek advanced to the final of the men's doubles at the US Open on Thursday after their Spanish opponents, Marcel Granollers and Marc Lopez, retired because of injury.

The first set was tied at 6-6 when Lopez was unable to continue because of an injury, forcing the duo to pull out of the semi-final match after an hour and 10 minutes on the Louis Armstrong stadium in New York.

Fifth seeds Paes and Stepanek thus entered their second Grand Slam final of the year, having won the Australian Open in January.

They will face second-seeds Bob and Mike Bryan, winners of 80 doubles titles including 11 Grand Slam crowns. The US pair beat ninth-seeds Aisam-Ul-Haq Qureshi of Pakistan and Jean-Julien Rojer of the Netherlands 6-3, 6-4 in their semi-final later on Thursday.

A 12th Grand Slam triumph for the brothers will tie them with Australians John Newcombe and Tony Roche as the most successful doubles combination in the Grand Slams. 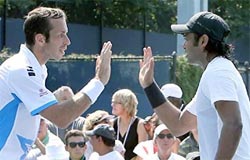 The first semi-final was halted as Lopez received a lengthy medical time-out due to a calf injury. Two games later he gestured that he would not be unable to continue before limping off the court.

Paes sympathized with Lopez at the end of the proceedings.

"I wish Marc all the best, because both he and Marcel are great guys," said the Indian ace.

"This is our livelihood and we come out to work hard and put on a show for you guys; so he definitely deserves respect."

The Indian-Czech team grabbed an early break on Lopez's serve to lead 2-1 after Stepanek fired a volley at Granollers.

Even though the Spanish team had fewer opportunities, they made the most of them. A nine deuce game on Lopez's next service outing at 2-4 resulted in six missed break-point opportunities for Paes and Stepanek.

Meanwhile, the fifth seeds converted the lone break point chance they had in the very next game. That levelled the set at 4-4 as Paes dumped a backhand volley into the net.

Lopez called the trainer at 5-5, 15-15 to address his calf injury that had begun to affect his movement.

He staved off two break-points and held serve, but Paes began hitting drop shots and Lopez was unable to even run for them. When Paes held serve to send the match into a tie-break, Lopez told his partner he would be unable to continue.

Errani and Vinci will meet the Czech pair of Andrea Hlavackova and Lucie Hradecka in Sunday's final.

Hlavackova and Hradecka defeated Su-Wei Hsieh of Taiwan and Anabel Medina Garrigues of Spain 7-6, 6-4 in their semi-final. 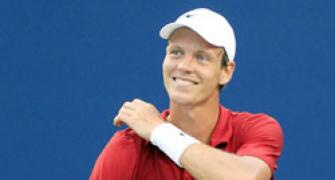 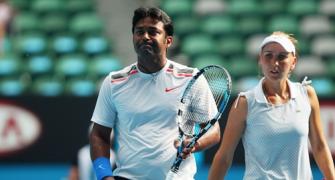 US Open: Paes, Sania out of mixed doubles Paes-Stepanek in US Open semi-finals

Sania-Bethanie in US Open 3rd round