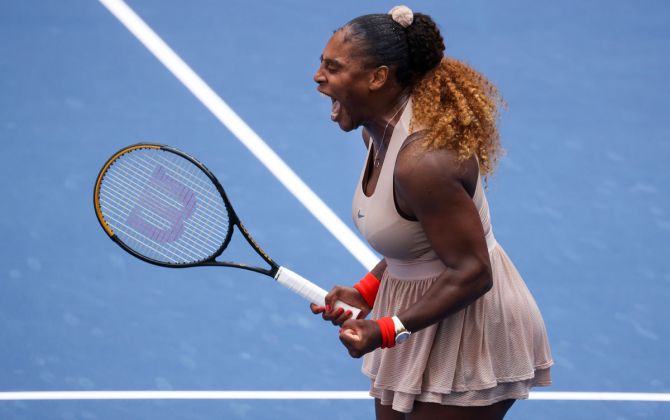 IMAGE: Serena Williams celebrates a point during her fourth round match against Maria Sakkari of Greece at the US Open on Monday. Photograph: Al Bello/Getty Images

Third seed Serena Williams advanced to the US Open quarter-finals after a gritty, tension-filled 6-3, 6-7(6), 6-3 win over Greece's Maria Sakkari on Monday.

Early nerves saw Williams start with a double fault, but the veteran then found her footing, playing strong defensive tennis to save all three break points against her in the first set.

Williams got the first break against Sakkari for a 4-2 lead before closing the set out with an ace.

The 23-time Grand Slam winner came up short in the second-set tiebreak however, with Williams' power serve abandoning her when she needed it most. Sakkari, seeded 15, carried the momentum into the third set as she started the decider with a break.

But 38-year-old Williams again showed the battling instincts that have made her one of the all-time greats. She broke back to level for 2-2 as Sakkari's forehand started to misfire.

The six-time US Open champion, who fired off the tournament's fastest serve with a 124 mph ace during the third set, marked her 100th win on Arthur Ashe Stadium with a roar that could be heard all around the grounds.

"I just kept fighting," said Williams, who lost to Sakkari two weeks ago in the Western & Southern Open. "She was doing so well she was being so aggressive. I knew I needed to do the same thing." 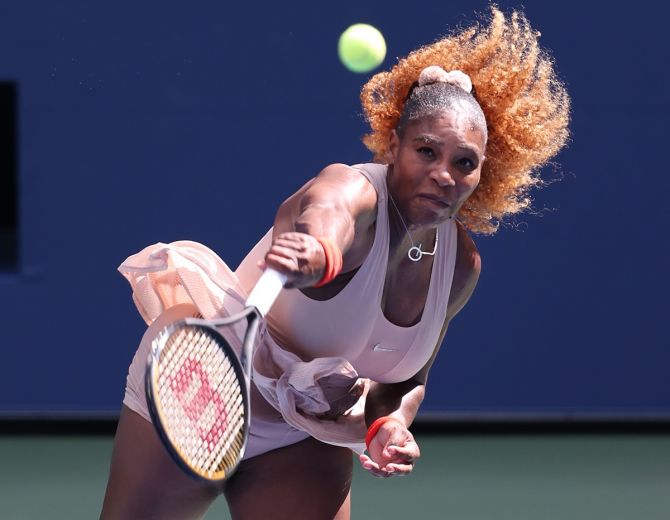 IMAGE: It was SerenaWilliams' second nail-biter of the tournament, after digging herself out of a one-set deficit to beat fellow American Sloane Stephens in the third round on Saturday. Photograph: Al Bello/Getty Images

Williams, who kept up the pace despite breathing heavily towards the end of the nearly 2-1/2-hour match, said her physical condition had improved since their previous meeting.

"I was able to compete longer. I was a little fatigued last time and had some cramps," she said. "I felt like she almost played better today. She's such a good competitor. So it was still... a really intense match."

It was Williams' second nail-biter of the tournament, after digging herself out of a one-set deficit to beat fellow American Sloane Stephens in the third round on Saturday. 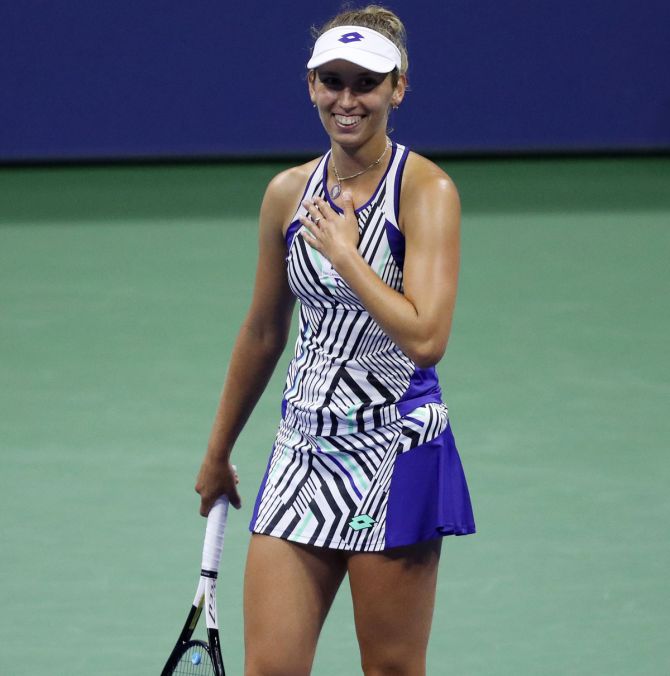 Belgian Elise Mertens continued her strong run in 2020 by taking down American second seed Sofia Kenin 6-3 6-3 on Monday to reach the U.S. Open quarter-finals for the second straight year.

Mertens, seeded 16th, played solid from the baseline and kept the errors to a minimum to defeat Australian Open champion Kenin for the first time in three career meetings.
Monday’s victory was the 23rd of the year for Mertens -- the most on the women’s circuit in 2020 -- and she has yet to drop a set in her Flushing Meadows campaign.

"It’s always good to look at matches against someone you lose to because you have to be better," Mertens said in her on-court interview. "Actually I watched a match that I lost against her last time."

Mertens hit four fewer winners than Kenin but had only seven unforced errors compared to 26 from the American.

"I was just very focused on my game, not too much on her game," Mertens later told reporters. "She can hit those balls, very short cross-court angles.

"I think my first serve went pretty well. Also throughout the whole match I didn’t really drop anything. That’s I think where I’m most pleased at, that I’m stable at every point."

Kenin, 21, had not dropped a set and had won 26 of her 28 service games coming into Monday’s fourth round match.

But she started off with a double fault against Mertens and then committed an unforced error and those problems plagued her throughout the match as Kenin slammed her racket on the ground in frustration.

Mertens broke Kenin’s serve three times to take the opening set and then got the crucial break in the sixth game of the second when the American committed three unforced errors to be broken at love.

The Belgian closed out the match with her seventh ace. 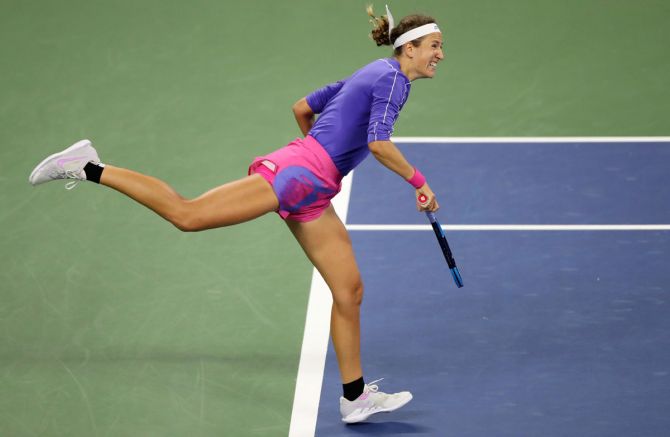 IMAGE: Victoria Azarenka serves during her fourth round match against Karolina Muchova of the Czech Republic. Photograph: Matthew Stockman/Getty Images

Victoria Azarenka reached her first Grand Slam quarter-final in more than four years after rallying from a set down to beat Czech Karolina Muchova 5-7, 6-1, 6-4 in the fourth round of the US Open on Monday.

The 31-year-old twice Australian Open champion was broken three times in the opening set but 20th seed Muchova looked increasingly hampered by a problem with her upper left thigh on Louis Armstrong Stadium.

Azarenka, on a high after winning her first title for four years at the Western & Southern Open, took full advantage of Muchova’s discomfort to whip through the second set and even up the contest.

Muchova took a lengthy medical timeout and returned heavily strapped for the decider but unseeded former world number one Azarenka would not be denied and marched on to a last eight date with Elise Mertens. 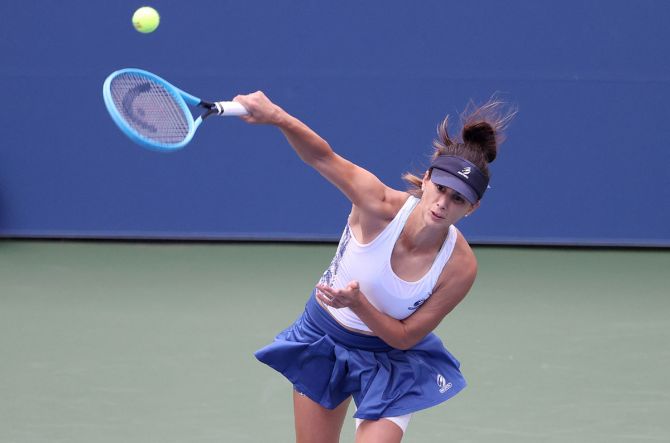 Tsvetana Pironkova continued her dream run at the US Open when the Bulgarian beat France's Alize Cornet 6-4, 6-7(5), 6-3 on Monday to move into the quarter-finals in New York for the first time in her career.

Playing in her first tournament in three years, the unseeded and unranked Pironkova had beaten Garbine Muguruza and Donna Vekic in straight sets last week, and prevailed over Cornet in a battle of wits in a near-three hour contest.

The 32-year-old Pironkova was at her aggressive best, playing quick points and she fired 46 winners past the Frenchwoman, winning 21 points at the net.

Cornet mounted a comeback in the second set as fatigue started to set in for Pironkova, who failed to serve for the match twice, but she was third time lucky in the final set when she sealed progress without a hitch.

"It's absolutely unreal. I really can't believe it, especially that I pulled through today," Pironkova said. "I was so exhausted by the end. I really didn't believe I had it in me but I kept fighting and it paid off."

Both players traded early breaks in the opening set before Pironkova broke at 4-4, chasing a dropshot on break point to successfully negotiate the ball over the net and past Cornet to serve for the set.

Pironkova continued to dictate play, picking her spots and spraying shots across the court as a frustrated Cornet's screams echoed around the empty stands when she had no answer to her strategy.

The Bulgarian used her powerful forehand shots to push the Frenchwoman deep behind the baseline numerous times before executing finessed dropshots which either won her the point or set her up for a forehand winner.

However, Cornet fought back from 2-0 down in the second to take control, winning eight points in a row at one stage, to take the lead but she was let down by her serve at crucial junctures.

Two double faults in the ninth game gave Pironkova the chance to serve for the match, only for her to drop her serve on 5-4 as fatigue started to set in.

A 40-shot rally before Cornet forced a tiebreak saw Pironkova take a breather courtside and her unforced error count also started to climb as her opponent sealed the set.

But Cornet's double faults came back to haunt her in the third set and when Pironkova broke at 4-4, this time she did not waver when she served for the match.

Pironkova, who secured a place in the draw with a protected ranking given to players who take maternity break, will play third seed Serena Williams in the quarter-finals in what will be a battle between two mothers.