IMAGE: In a battle of baseline blasters, fourth seed Naomi Osaka had the edge in firepower over 14th seed Anett Kontaveit in the late match at Arthur Ashe stadium. Photograph: Matthew Stockman/Getty Images

Former champion Naomi Osaka was at her free-swinging best as she stormed into the US Open quarter-finals with a 6-3, 6-4 win over Anett Kontaveit on Sunday.

In a battle of baseline blasters, fourth seed Osaka had the edge in firepower over 14th seed Kontaveit in the late match at Arthur Ashe stadium.

Kontaveit showed grit to save five match points at 5-4 in the second set but bowed out netting a forehand at the end of another baseline skirmish.

Osaka's left thigh was heavily strapped as she continues to manage a hamstring injury but she moved superbly to set up a clash against unseeded American Shelby Rogers. 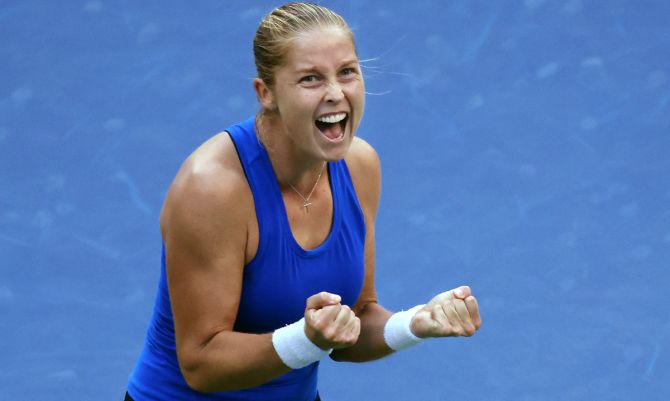 American Shelby Rogers ousted sixth seed Petra Kvitova in the fourth round of the US Open on Sunday, winning 7-6(5), 3-6, 7-6(6) in one of the most tightly-contested matches of the tournament so far.

Rogers saved four match points in a strong defensive effort that saw her commit a dozen fewer unforced errors than her opponent, as the twice Wimbledon champion struggled with her serve and committed seven double faults, including one late in the third-set tiebreak.

The 27-year-old flipped her racket, pumped her hands and screamed as she booked her first-ever US Open quarter-final berth inside Louis Armstrong Stadium.

Rogers, who lost in the semi-finals at Lexington last month, will next face either fourth seed Naomi Osaka of Japan or Estonia's Anett Kontaveit.

Shapovalov into quarter-finals after Goffin win Denis Shapovalov regrouped after losing a terrible first set tie-break to beat David Goffin 6-7(0), 6-3, 6-4, 6-3 on Sunday and become the first Canadian man to reach the US Open quarter-finals in the Open era.

Shapovalov will next face Spain's Pablo Carreno Busta in the quarter-finals after the 20th seed was awarded his fourth round match against Novak Djokovic by default when the world number one hit a line judge with a ball.

It will be Shapovalov's first Grand Slam quarter-final and could lead the way for a Canadian charge into the last eight with compatriots Vasek Pospisil and Felix Auger-Aliassime playing their fourth round clashes on Monday.

"It's pretty crazy how far I've come," said Shapovalov, who got "goosebumps" when told of his achievement.

"Today was an extremely tough match, I had to play every single point against him and match his stability, his calmness."

Goffin made a strong start to the match then ran away with the first set tie-break 7-0 and Shapovalov said he used the time between sets to regroup.

The Canadian rallied in the second set behind a powerful serve and strong forehand, and the momentum swung in his favour when he broke for the first time in the fourth game.

The 12th seed took what opportunities came his way in the third set and fought off Goffin's only break opportunity in the eighth game with his 11th ace.

He raced to a 4-1 lead in the fourth set but surprisingly failed to serve out while leading 5-2 as Goffin got his first break of the match.

However, Shapovalov settled down and sealed the win on his third match point to set up the clash with Carreno Busta, who beat him in the fourth round at Flushing Meadows in 2017.

"He's beaten me every time on hard courts so it'll be ... another long battle," Shapovalov said. IMAGE: Alexander Zverev produced 39 winners and dropped just one service game during a ruthless performance against Alejandro Davidovich Fokina at the US Open on Sunday. Photograph: Al Bello/Getty Images

Alexander Zverev slammed down 18 aces en route to demolishing Alejandro Davidovich Fokina 6-2, 6-2, 6-1 in the fourth round of the US Open on Sunday.

After an early break for the 2-1 lead, the 23-year-old German never let his Spanish opponent get a foothold in the match. He produced 39 winners and dropped just one service game during a ruthless performance.

Davidovich Fokina grabbed a 2-0 lead in the second set but the advantage was shortlived as Zverev broke back before racing away with the set. He sealed it with an ace.

The Spaniard barely had a chance to make an impact on the world number seven's serve, the fastest clocking at 139 mph, just shy of his personal record of 142 mph.

Davidovich Fokina, who took a medical time out to treat a foot problem, tried to rattle Zverev by attempting some drop shots but the fleet-footed fifth seed moved nimbly around the court.

The win was overshadowed by a shocking incident one court over, as top seed and widely presumed favourite Novak Djokovic was disqualified from the tournament after striking a line judge with a ball following a point during the first set of his match against Spain's Pablo Carreno Busta.

A stunned Zverev went ahead with a previously scheduled press conference minutes after the incident.

"It's very unfortunate that, you know, he hit the line judge, and especially where it hit her," he said. "I don't know what to say. I'm a little bit in shock right now, to be honest."

Zverev, who reached the Australian Open semi-finals earlier this year, was among the favourites to contest Djokovic at this year's competition.

Putintseva into quarter-finals after beating Martic 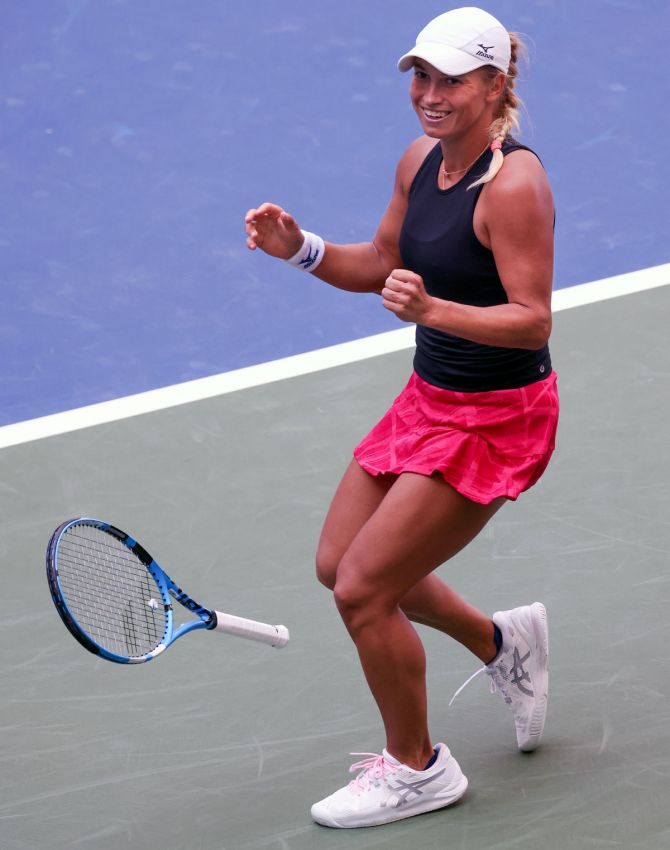 Kazakhstan's Yulia Putintseva reached the US Open quarter-finals with a 6-3, 2-6, 6-4 victory over eighth seed Petra Martic in a see-saw encounter at Flushing Meadows on Sunday.

Putintseva surged into a 5-0 lead in 19 minutes on her way to taking the opening set but Croatian Martic appeared to have turned the match in her favour by easing through the second.

With Putintseva needing treatment on her back during the second set, it seemed the 29-year-old Martic was favourite to reach the last eight. Instead it was Putintseva who romped away into a 5-1 lead before nerves crept back in.

Martic clawed back three games before having her own timeout to deal with a foot injury -- giving Putintseva plenty of time to think about the task of serving for victory.

On the resumption though Putintseva, the 23rd seed, held herself together admirably and produced an ear-splitting roar after sealing victory as Martic drilled a backhand into the net.

Putintseva is the first player representing Kazakhstan to reach a US Open singles quarter-final.

"I was like I hope I'm not going to fall down and cramp," Putintseva, who was playing for the first time on Arthur Ashe Stadium, said of her long wait to serve for victory at 5-4.

"This means a lot to me right now and I'm very happy. Because there were no fans at least it wasn't so stressful."

Putintseva started like a house on fire against a player she had never faced before, blazing through the opening games.

But Martic began to make inroads by mixing up the rallies and it was a relieved Putintseva who finally took the opener on her fourth set point.

Martic took control in the second set though as Putintseva's level cooled off. Putintseva was not to be denied though and will have a great chance to reach her first Grand Slam semi-final when she takes on American Jennifer Brady. IMAGE: Jennifer Brady returns the ball during her fourth round match against Angelique Kerber of Germany. Photograph: Al Bello/Getty Images With spectators banned from the tournament due to the coronavirus pandemic, Brady praised Kerber during an on-court interview in an empty Louis Armstrong Stadium.

"(Kerber is) a great player, she makes you fight for every point," said the 25-year-old Brady, who clinched her first WTA title last month and has only lost only once since the sport returned from the COVID-19 hiatus.

The 25-year-old said her leg was "feeling good" after the match.

"Knowing that I can play my game at a high level from the very first point all the way until the end without a dip in my physical abilities."